A Glorious Weekend Filming with Fellow Deplorables in California

Hello America. I am black conservative Christian singer/songwriter Lloyd Marcus. I just returned home to West Virginia from a wonderful weekend with fellow Trump supporters in California, filming the music video for my Trump Train 2020 song.

Even though we east and west coast Trump supporters were meeting for the first time, the atmosphere of the video shoot was electric, feeling like a joyous family reunion. Everyone relished in the opportunity to fellowship with others who love America; freely expressing their Christianity, conservative values and support for our president who boldly places America first. We were united as brothers and sisters in our mission to “Keep America Great” by securing the reelection of our remarkable president. 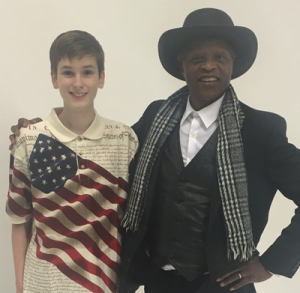 Robert treated me to a sneak-peek of his hilarious new short film titled, “Nightmare in Paradise.”It’s about an emigre from Kansas who has a nightmare about trying to run a business in California. Things go from bad to worse when a Wazeri Immigrant Transgender cross-dresser shows up for a job interview. The situational humor is based on actual California law.

Robert’s humor is an entertaining component of the Trump Train 2020 song music video. Humor is an excellent vehicle to spread truth. It is refreshing that members of Robert’s film crew are conservatives who support Trump. Yes, there are entertainment industry professionals in California who love America.

Sunday, before heading to the airport for our return trip home, we had dinner in the restaurant of the historic beautiful Hotel del Coronado where the movie “Some Like It Hot” was filmed in 1958. Our drinks were served with paper straws which began falling apart in a short amount of time. My sister, who sang on the Trump Train 2020 song, came to California with us. I explained to her that California is in the process of banning plastic straws to save the environment. And yet, diseases we have not seen in decades are resurfacing because California allows people to poop on the streets. Vagrants defecating on the streets has become so pervasive that poop maps are distributed to help tourists avoid piles of human excrement. My sister could hardly believe her ears. Fake news media has insidously hid this disgusting truth and other policies which cause law-abiding taxpayers to suffer in cities controlled by socialist Democrats.

A victim of fake news media, my sister was unaware of all the gender insanity going on in our country. She said during a doctor visit in Maryland, she was stunned by the numerous gender options she was given on the medical form. “Zero” was one of the absurd gender options.

Upon returning the van to the airport rental center, we laughed at a restroom sign. The sign featured three graphic silhouettes; a male, a female and one half and half. The text read, “ALL GENDER RESTROOM. Anyone can use this restroom, regardless of gender identity or expression.” The sign was a prime example of the craziness Democrats are cramming down the throats of mainstream Americans under the pretense of compassion and inclusion.

Fourteen year old Nicholas sang on the Trump Train 2020 song. His mom entrusted me to bring him to California with us to appear in the music video. Nicholas is home schooled. Folks, this kid is awesome; bright, extremely knowledgeable and well-poised.

In my travels around the country, I have noticed the same outstanding traits in home schooled children. Democrats hate and are aggressively scheming to ban homeschooling.  They demand total access to the hearts and minds of our kids to transform them into anti-Christian, anti-American and socialist social-justice-warriors. Due to Democrat control of public education, kids are infected with LGBTQ propaganda beginning with preschoolers.

C’mon America! Get onboard the Trump Train!