“America’s state religion, is patriotism, a phenomenon which has convinced many of the citizenry that ‘treason’ is morally worse than murder or rape.”  —William Blum, an American author and critic of United States foreign policy

Article 3, Section 3, Clause 1 of the U. S. Constitution describes “Treason” against the United States, shall consist only in levying War against them, or in adhering to their Enemies, giving them Aid and Comfort.  No Person shall be convicted of Treason unless on the Testimony of two Witnesses to the same overt Act, or on Confession in open Court.  The Congress shall have Power to declare the Punishment of Treason.”

The Constitution Center (www.constitutioncenter.org) expands on the definition. “Treason is a unique offense in our constitutional order—the only crime expressly defined by the Constitution, and applying only to Americans who have betrayed the allegiance they are presumed to owe the United States. While the Constitution’s Framers shared the centuries-old view that all citizens owed a duty of loyalty to their home nation, they included the Treason Clause not so much to underscore the seriousness of such a betrayal, but to guard against the historic use of treason prosecutions by repressive governments to silence otherwise legitimate political opposition. Debate surrounding the Clause at the Constitutional Convention thus focused on ways to narrowly define the offense, and to protect against false or flimsy prosecutions.” 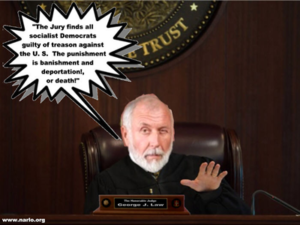 Three important words are used in this expanded definition of treason: “allegiance”, “adhering” and “loyalty.” “Allegiance” is defined as: “loyalty or commitment of a subordinate to a superior or of an individual to a group or a cause.”    “Loyalty”, in general use, is defined as “a devotion and faithfulness to a nation, cause, philosophy, group, or person.”  “Adhering” means “in support of.”

The president, before taking office, swears under oath that: “I do solemnly swear (or affirm) that I will faithfully execute the Office of President of the United States, and will to the best of my Ability, preserve, protect and defend the Constitution of the United States.”

The above definitions of treason and the President’s oath of office beg several questions:

Yes, there is much more but for our purposes these nine government actions give a meaningful representation of potential treasonable violations.

We can pretty much rule out the first constitutional definition of treason: “levying war” against the United State”, which requires mounting a physical war against the U. S. with organized troops and weapons.  However, “adhering to [the] enemies [of the United States], giving them aid and comfort” becomes much more viable when we compare this second definition of treason to the above described nine government actions.

A violation of, or imperiling national security could be construed as “adhering to the enemies of the U. S. and giving them aid and comfort.”  Purposeful open borders by government’s direct actions, as President Biden has done, seriously imperils America’s national security and sovereignty.  It is giving “aid and comfort to our enemies,” a treason violation.  It also violates the president’s oath of office.

The American people have allowed government carte blanc authority to do pretty much whatever it damn well pleases.  It lies to us.  It has taken over most of our institutions, including public schools and colleges.  It passes legislation, laws and rules that erode our constitutional foundation of liberty and eliminate the core principles of our Constitutional Republic.  Remember, “We Are Free Because of Our Constitution.”)

They, the socialist Democrats, have now embarked upon a crusade to fundamentally transform America into a socialist nation using every means at their disposal, sometimes unlawful or illegal, to grab absolute power over all Americans.  Many of their methods to assume power come from direct violations of their sworn oaths of office and the U. S. Constitution, but more particularly the treason clause of the Constitution.

The socialist Democrats may yet reach their goal of perpetual power unless good Americans stand up en masse, in unison and in purpose to stop them.  But if you are part of that “I don’t want to get involved crowd” the socialist Democrats win and they have been winning for a very long time.  Their method is simple.  Just buy the people’s vote using the people’s money in the U. S. Treasury ….. or printing the money with no regard for the consequences.

One must ask: is the Biden Administration, his cabinet secretaries, the current U. S. Congress, or the federal bureaucracy demonstrating “Allegiance” and “loyalty” to the American people?”  Or are they     “Adhering to [the] enemies [of the United States, giving them aid and comfort” a treason offense?  Is President Biden in compliance with his oath of office wherein he swears that, “I will faithfully execute the Office of President of the United States, and will to the best of my Ability, preserve, protect and defend the Constitution of the United State?”  Does the Democrat voter know what he or she is doing, when they vote for a Democrat candidate, from the president on down, or is their only consideration for the “free stuff” that Democrats are promising?   You decide!

Remember: “Your In-action Today Condemns Your Children To Tomorrow’s Slaves.”

We conclude with a message to the current generation.  As you go about your daily lives and do nothing to reverse the degradation and treasonable actions perpetrated by evil actors upon Americans, you have condemned your children and grandchildren to ever-increasing slavery until at one point they will be so controlled and regulated that they might as well be in chains ….. or behind bars. That will be your legacy on behalf of your children and grandchildren when the fact is you have a biological imperative to protect them from all dangers and enemies, even future ones.

There are only three peaceful actions that will stop the onslaught of the American socialist Democrat, short of war:

In short, only the American people can save America and freedom from eventual annihilation.