Home/August 2020, Opinions/An Open Letter To The Biden-Harris Campaign and Democrats

An Open Letter To The Biden-Harris Campaign and Democrats

Dear Joe, Kamala and all other Democrat Politicians and Voters:

To Joe:  We are writing to you on behalf of millions of Americans that see right through you.  We are not fooled by your down-on-the-farm, soft-spoken facade.  You are a fraud and a phony.  Not only that, you are losing your mind to age or dementia.  You shouldn’t even be running for president.  You are corrupt and you have used your 47-year career in the federal government to enrich yourself and your family members, including your brothers.  You are all about self and self-serving, not service to country. 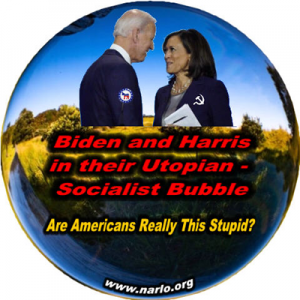 No, we haven’t forgotten about your trip to China with your son Hunter on Airforce 2 while you were Vice President of the United States.  Hunter suddenly became rich overnight with a $1.5 Billion investment from a Chinese Private Equity firm (BHR) and the Bank of China.  A coincidence, hardly!  You let yourself be bought off by our enemy China and now owe your soul to them.

Nor have we dismissed Hunter being appointed to the board of one of Ukraine’s largest natural gas producer (Burisma) at an unheard of exorbitant salary while you were overseeing Ukraine as Vice President.  It has been reported that the Burisma money to Hunter came from Rosemont Seneca Bohai (a New York firm) in sums ranging from $10,000 to $150,979 per month.  (What did Hunter do for all that money?  What was his experience in natural gas production?) Rosemont received over $3.15 million from Burisma for consulting services.  One could construe that Hunter’s money was laundered through Rosemont to purposely hide Hunter’s involvement with Burisma.  Another coincidence?  Only a fool would believe that!

You sold your position as Vice President of the United States to the highest bidder.  You likely did the same thing as a U. S. Senator.  You peddled influence.   You acted as agents of foreign governments without registering under the Federal Foreign Agents Registration Act.  You bribed foreign state politicians to get your way or to protect Hunter.  You should be in jail.

Free Americans are aghast that millions of Americans (mostly city folk) have sunk so far that you, Joe Biden, a true Establishment and corrupt Democrat politician, could become their champion for president and that Kamala Harris, an out-for-blood, insanely ambitious, corrupt California State Attorney General, also a socialist Democrat, would be selected as your running mate.

So what do you believe in Joe?  We know you want to be president, but why? Maybe it is ambition, power, fame and fortune.  Maybe it’s the desire to rule over the masses thereby elevating your self above the riff-raff and unwashed of society.  You want their vote but do you relate to them in a meaningful way?  Since you have lived a life of privilege off the taxpayer, it is quite doubtful you care about them one way or another.  You just want power for power’s sake.

Will you take your marching orders from the fringe socialist left like Bernie Sanders and AOC, or will you govern by moving more to the center?  Since you appear to be a hollow shell of a man with no beliefs, most of us believe you will be pulled way left and go half crazy with the Green New Deal, Medicare for All, free college tuition, forgiving all college debt, repealing the Electoral College, repealing the 2nd Amendment, taking our guns away, repealing the filibuster rule, de-funding the police, eliminating ICE, open borders, expand sanctuary cities, along with free health care and amnesty for illegal aliens, without regard to the cost to the taxpayer (most estimates are at least 40% of the Gross Domestic Product) or the fundamental changes in our way of life, our culture and the principles of individual freedom as enshrined in our Constitution.  These are all insane policies Joe and most of them are in the Democratic Platform.   (See: “DNC Platform”)

And Joe, California got a taste of your Green New Deal and efforts to control the fraud of Climate Change this summer by previously shuttering gas-fired power plants across the state, stopping construction of nuclear and hydro power plants and building expensive, taxpayer subsidized wind turbines and solar arrays instead.  Except the wind quit blowing during the current heat wave, solar only provides power during the hot part of the day, the air conditioners came on by the millions, Arizona and Nevada which provide power to California, kept their power in their states, the hydro dams in Washington State were headed for full capacity sending electricity to California and a stand-by gas fired plant failed to come on when requested, leading to rolling blackouts throughout California.  Talk about poor planning!

To the rest of you, if you don’t have power in your California home right now, you can blame the fraud of Climate Change and the national and international environmentalists and the governments that listen to them.  If Joe and Kamala implement the Green New Deal and very expensive efforts to confront phony Climate Change, rolling blackouts could be coming to your state, or worse.  (See: “Back To The Future, The Obama Legacy”)

Joe and Kamala, you live in a utopian, socialist bubble, insulated from the lives of real Americans and oblivious to their needs.  You promise much but are incapable of delivering on those promises. Otherwise Joe, you would have delivered on those promises during your term as Vice President.  But you were more interested in lining your pockets and trying to take down a duly elected president.

You and those of your ilk have split this country down the middle, pitting whites against blacks, Latinos, Asians and American Indians and convinced everyone that systemic racism is alive and well in America when the racism you charge others with, is racism of Democrat’s own making.  You agree with calling every white person a racist, which, since you are white, makes you a racist.

With insane Democrat socialist policies you have passed over the last 8 decades, you have turned the Black race into a fractured, hopeless culture that blames everyone else but themselves for their own ills.  You have made Blacks victims and dependent on government and you did it for votes, not altruism.  You and other Democrats have allowed Black schools to disintegrate such that Black academic achievement is way below the general population.  They struggle if they even reach college and have trouble finding jobs.  You and your Democrat pals and policies did that.

You and all other Democrats have said nothing about the growing violence in America that is mostly occurring in Democrat-run cities.  You’ve said nothing and done nothing about the war zone and gang violence that is called south Chicago where little children are killed while sitting in their strollers, or in their beds.  Although you say you are not for de-funding the police, way too many other Democrats promote and sponsor such efforts, the antithesis to controlling violence in our society.

Blaming Trump for badly handling the Coronavirus is like blaming the Sun for deserts.  It is abundantly obvious that you, as President, couldn’t have done any better and knowing you as we do, you probably would have done worse.  It’s always easy to criticize someone else’s management of an uncontrollable, run-away natural disaster.

You are complicit, along with Obama, Comey, McCabe, Rice, Clapper, Brennan, Strzok, Page, Orr, Hillary Clinton and the DNC (and others) to take down a duly elected president by staging an illegal silent coup and spying operation, using powerful federal agencies and the intel community to do it.

You support Black Lives Matter (BLM) but BLM is a Marxist organization intent on tearing down by force, America’s institutions and system of government.  BLM is no better than violent ANTIFA, or the old Weather Underground, or Students For A Democratic Society.

Your slogan is to “Build Back Better.”  How the Hell are you going to top Trump’s record of bringing back jobs and manufacturing to America, raising wages and providing the lowest unemployment rate for Blacks, Latinos and women in a half century?  Your idea of bringing back jobs is massive government projects at taxpayer expense.  To do that you would have to pass usurious taxes on the middle class.  Over-taxed people are not free people Joe.

You keep asking the rich to pay their “fair share” but never describe “fair share” when asked.  The top 10% of all wage earners are already paying 70.1% of all federal income taxes.  The top 5% pay almost 60% of all federal income taxes.  You would take it all if you could and it still wouldn’t be enough to satisfy your insatiable appetite for a larger and more powerful federal government.

Your speech at the convention last Thursday night, where you accepted the Democrat nomination for president of the United States, was hollow, full of glittering generalities and empty promises, with little or no substance or details.  The only thing that became clear from the Democratic convention and all of its speakers is that you hate Donald Trump.  Why do you hate him?  Because he upset your cushy apple cart and exposed you and the news media for the frauds and traitors that you and they are.

In a recent article we wrote: “We and millions like us have come to the conclusion that every time you talk to a person that has aligned him or her self with the Democratic Party, it can only be construed that they are either politically blind, corrupt, wholly ignorant, or a traitor.  The current Democrat Party is a treasonous organization bound and determined to destroy individual liberty and to corrupt or tear down the American Constitution.  If you and Kamala are elected this November, it will only bring us closer to civil war or revolution.  The Coronavirus and the massive government control it triggered have highlighted the growing evidence of open resistance to government tyranny and a potentially “hot” revolution.  Why do you suppose Americans are buying guns and ammunition at record rates?  Democrats have caused this condition in their Century-long, clandestine fight to make America a monolithic society, ruled by Absolute Democratic Monarchs” like you!  To achieve that, you and they have cheated, lied, stolen and broken the law.

We can only hope that most Americans will see through your hidden charade and re-elect Donald J. Trump in 2020.