Home/March 2017, Opinions/Are You A Subject of Government, Or A Sovereign?

Are You A Subject of Government, Or A Sovereign?

NOTE:  This article has nothing immediately to do with our contemporary problems as a nation and as a people.  And then again, it may have EVERYTHING to do with our current problems as a people and as a nation because it deals with the principles of individual freedom and sovereignty and who HAS the real power, but only if they have the courage to exercise that power.  We write these kinds of articles from time to time to bring a much-needed focus to the issues 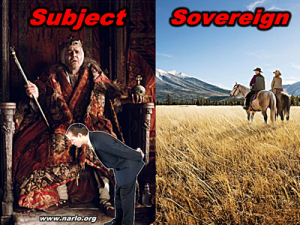 The U. S. Constitution and the Constitution of the several states do not start out with “We the Government“, or “We the Group“, or “We the Collective“, or “We the King.”  They all start out with “We The People” and for good reason.  The whole concept of “We the People” was and still is based on the fundamental law that each person is endowed with personal sovereignty over their lives and their property.  America’s total foundation was built upon sovereignty resting in the people, not the government.  Government was limited to seventeen (17) enumerated powers.  All other rights were reserved unto the states and the people.  Each individual person is equal to all other persons, as joint tenants in a government created by them, with the right to throw off that government or “….. to alter or to abolish it, and to institute new Government, laying its foundation on such principles and organizing its powers in such form, as to them shall seem most likely to effect their Safety and Happiness.”

For over 100 years, one political party in America has been doing everything within its power to convert America into a Democracy (“mob rule”) by buying off the people for their votes and dividing them into constituency groups that fight with each other for the spoils of government.  Sadly, that political party has been hugely successful.

But this political party and those that adhere to it are and have been egregiously wrong, if individual freedom is the sacrosanct pillar of liberty.  In a Republic, no other person, or operation of government, can take your property, your labor, your thoughts, or your life from you without your permission, for that is theft, or murder and it is a crime on your person and on humanity as well.  That crime, now accepted as “normal” by the people, is deserved of severe punishment, but punishment has yet to come.  By accepting that crime as “normal”, the people have abdicated their individual sovereignty to the group, the collective, the mob, to government.  The natural fact is, you are an individual, endowed with certain unalienable rights, a gift from your creator.  Not because someone wrote it down in a book, or a Declaration, or a Constitution, or shouted it from the rooftops.  It is true because it is the law of nature.  It is an absolute law with no contravening or superior law to supersede it.  It is the law of all laws and cannot be repealed by man or God.

Only you own your life, your property, your thoughts and your labor and all are sovereign to that which is you.  You are not a pawn that can be battered about at someone else’s will, or a whim, or for entertainment, or for the pure exercise of absolute power.  You are not a slave to the collective, or the elite and you owe nothing to humanity other than what you choose to give of your own volition, as a free spirit, endowed with free choice.  Your only responsibility is to take care of yourself and those in your charge and to treat others with the same respect and dignity, as you desire to be treated.  Your only duty to country is to defend it when it is under attack.

You did not create you.  In the beginning you had no control over the mechanisms that formed the shape of your body, the characteristics of your personality or your mind, or the capabilities that were granted to your body and mind by virtue of genetics and life with or without your parents.  But no matter what anyone tells you, you were not created to serve others, unless it is your choice to do so.  In fact, you were created to express who you are, as a flower expresses its beauty to the world.  You were created to serve your life and those you love, in the endless pursuit of happiness.

You are unique, one of a kind, a sovereign and no other can be like you.  It is your individual uniqueness that is your value.  It is what you express or achieve as a person, that is your mark, your legacy, your reason for being here.  No other person, group of persons, or a government, has the right to take that from you.  You are not a pawn, for you are sovereign under the supreme law of nature.  You are free to choose good or evil, but if you choose evil, there will be a price to pay.

A sovereign can be defined as an individual that believes in self-ownership; a strong commitment to individual rights; a distrust of a political democracy; an unwavering belief in the right to financial and personal privacy; a willingness to think and act outside the square.  It is individual sovereigns in action that have given America its unique and exceptional character, its power, its creativity, its productivity and even its generosity.  It is each individual sovereign pursuing his or her life, liberty and happiness that set each of us a part from all other humans on earth.  It is our strength.  It is our foundation.  It is the bedrock upon which we stand.  It is unequivocal, sacrosanct and unassailable.

The Founding Fathers recognized individual free will, or individual sovereignty as it were, as the right of every human being to life, liberty, property and the pursuit of happiness.  However, even though the Founding Fathers codified individual sovereignty into the U. S. Constitution, as enumerated in the Declaration of Independence and the first 10 Amendments in the Constitution, if an individual does not have the courage to exercise his or her free will, he or she, will be an easy mark for control by a government, or a group, a mob, or a bully.  They will be vulnerable to propaganda, hype, distortion and lies in that they abdicate their right of free will to someone else, or a group, or a government ….. or a mob.  Because you see, freedom is courage in the exercise of free will, which entails the taking of risks.   Unfortunately, there are millions of Americans that exist in America today, who do not have the courage to exercise free will and they are the ones that continually elect politicians who will make decisions for them and give them handouts from the government.

Freedom is hard.  It demands sacrifice and a never-ending defense against those that would take it from you.  Although it encourages success, it also predicts failure.  But the experience of failure accelerates attaining success, because failure is learning.  If government takes away the right to fail, as the American government has been doing for some 100 years under a flawed Progressive ideology, individuals cease exercising their free will.  If individuals cease exercising their free will, governments, groups, or other individuals, or the mob, will fill the gap and take away individual sovereignty from everyone, as they have been and are doing.

It is the exercise of free will, or individual sovereignty that has poll vaulted a 240-year-old country, conceived in freedom and liberty, into the wealthiest, the most productive, the most creative, the most industrious and the most generous nation on Earth.

But if a bully, or a mob, or a tyrannical government descends upon a sovereign, it is up to that sovereign to defend against the bully and to rally other sovereigns in his defense, as we must do today.  For the bully is knocking on our door and he has evil intent on his mind.  He intends to claim our property, our thoughts, our labor and our life as his own and take away our individual sovereignty over our own lives, in favor of the group, the collective, the mob.  He intends to control our money, our land, our water, our food, our health and our energy.  He is well on his way to achieving his goal.  In the end, he intends to take away our free choice and thus, our liberty.   He is the enemy of freedom, but he will succeed, only if we let him.

If you believe in all your heart that your property, your thoughts, your labor and your life are only yours to give and that your life is sovereign, then you have no choice but to defend it against the bully and if necessary, defend it with your life.  For if you choose not to defend it by whatever means, you will lose it and your children will lose it and your children’s children will lose it.  It will then be left to another braver generation to reclaim freedom and reclaim it they will, but at a great cost.  When freedom is finally reclaimed once more, the future victors will look back at our generation and label them cowards.

It is now time to decide ….. are you a government subject, or are you a sovereign?  Are you a coward, or are you courageous?  Are you timid, or are you fearless?  Liberty awaits your answer and liberty grows anxious because liberty’s life and future is on the line ….. and it always is.

But then these are just words.  Without action, the words are meaningless.

You are encouraged to ADD your thoughts.