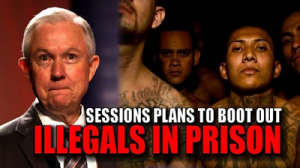 Sessions visited the Long Island suburbs to deliver a message of hope to the areas that are experiencing one of the downsides of uncontrolled immigration – foreign organized crime gangs.

Law enforcement sources in the United States claim that intelligence reports signal a formal alliance exists between the Salvadorian-based Mara Salvatrucha — better known in the U.S. as MS-13 — and the equally dangerous and bloodthirsty Los Zetas, the most feared criminal organization or cartel in Mexico.

This latest development throws a curve ball at U.S. law enforcement efforts to assist the Mexicans and other Latin American nations fight the organized crime syndicates who traffic in narcotics that is earmarked for the United States and European nations.

According to a Conservative Base source working on intelligence analysis for a federal law enforcement agency, there are signs that MS-13 members are exchanging their most valuable asset — intelligence on governments’ anti-drug operations — for Los Zeta’s military training, some of which was gained when members were part of Mexico’s federal police and military.

Some Los Zetas members were even trained in the United States at the School of the Americas located at Fort Benning, Georgia, according to former police detective and intelligence officer Michael Snopes.

“Los Zetas was formed about 12 years ago by deserters from the Mexican army’s special forces units,” according to Snopes. They have already worked with drug gangs in Guatemala and began to entice members of that nation’s military to join “the darkside,” said Snopes.

While El Salvador’s government officials claim links between MS-13 and Los Zetas are few and far between, American drug enforcement officials believe the alliance is a reality and helps Los Zetas to dominate the other Mexican cartels vying for power.

“Usually armed with only handguns, MS-13 are now carrying military rifles — M-16s or AK-47s — and explosives such as grenades and mortars,” said a source who requested anonymity.

The Zetas’ ultimate goal is to integrate the Maras into their network and become the most powerful group in Guatemala — criminal or legitimate, according to the United Nations Office on Drugs and Organized Crime.

They’ve severed the fingers of their rivals with machetes…brutally murdered suspected informants, including a 17-year-old pregnant federal witness…attacked and threatened law enforcement officers…committed a string of rapes, assaults, break-ins, auto thefts, extortions, and frauds across the US…gotten involved in everything from drug and firearms trafficking to prostitution and money laundering…and are sowing violence and discord not just here in the US but around the world.

MS-13 members perpetrate violence—from assaults to homicides, using firearms, machetes, or blunt objects—to intimidate rival gangs, law enforcement, and the general public. They often target middle and high school students for recruitment. And they form tenuous alliances…and sometimes vicious rivalries…with other criminal groups, depending on their needs at the time.

Who are they? Members of Mara Salvatrucha, better known as MS-13, who are mostly Salvadoran nationals or first generation Salvadoran-Americans, but also Hondurans, Guatemalans, Mexicans, and other Central and South American immigrants. And according to our recent national threat assessment of this growing, mobile street gang, they could be operating in your community…now or in the near future.

Based on information from our own investigations, from our state and local law enforcement partners, and from community organizations, we’ve concluded that while the threat posed by MS-13 to the US as a whole is at the “medium” level, membership in parts of the country is so concentrated that we’ve labeled the threat level there “high.”

Here are some other highlights from the FBI’s MS-13 threat assessment:

MS-13 operates in at least 42 states and the District of Columbia and has about 6,000-10,000 members nationwide. Currently, the threat is highest in the western and northeastern parts of the country, which coincides with elevated Salvadoran immigrant populations in those areas. In the southeast and central regions, the current threat is moderate to low, but recently, we’ve seen an influx of MS-13 members into the southeast, causing an increase in violent crimes there.

MS-13 members engage in a wide range of criminal activity, including drug distribution, murder, rape, prostitution, robbery, home invasions, immigration offenses, kidnapping, carjackings/auto thefts, and vandalism. Most of these crimes, you’ll notice, have one thing in common—they are exceedingly violent. And while most of the violence is directed toward other MS-13 members or rival street gangs, innocent citizens often get caught in the crossfire.

MS-13 is expanding its membership at a “moderate” rate through recruitment and migration. Some MS-13 members move to get jobs or to be near family members—currently, the southeast and the northeast are seeing the largest increases in membership. MS-13 often recruits new members by glorifying the gang lifestyle (often on the Internet, complete with pictures and videos) and by absorbing smaller gangs.

Right now, MS-13 has no official national leadership structure. MS-13 originated in Los Angeles, but when members migrated eastward, they began forming cliques that for the most part operated independently. These cliques, though, often maintain regular contact with members in other regions to coordinate recruitment/criminal activities and to prevent conflicts. FBI officials believe that Los Angeles gang members have an elevated status among their MS-13 counterparts across the country, a system of respect that could potentially evolve into a more organized national leadership structure.