AZ Gov. Ducey: You Don’t Know What You’re Talking About

It’s been almost a week since the status report on the forensic audit out in Arizona took place.  All of the findings had already been given to their Attorney General.  The mess in Maricopa County is even worse than most imagined.  Their County Board of Supervisors should fire a whole battery of individuals but they won’t.  It will be up to their AG to pursue criminal charges.

“IT’S HIGH NOON” – Arizona Attorney General Mark Brnovich: “If We Don’t Stand Up Now And Protect The Constitution And Rule Of Law, We’ll Never Get It Back.”

As I’ve said before, I’ve never seen people work so hard to prove their guilt as what we’ve seen the last ten months.  Maricopa County Board of Supervisors (there’s a few honest ones) cost their taxpayers millions of dollars to fight against something every voter wants:  election integrity and to expose fraud if it exists.

The latest win came on September 17, 2021:  HUGE WIN For Arizona Senate: Cyber Ninjas WILL Access The Routers As Requested – Questions WILL Be Answered

“Maricopa County has agreed to settle with the Arizona Senate and allow them to perform a joint-led audit of the County routers, Splunk logs, and dominion software.

“This means that the 1487 complaint filed by Arizona State Senator Sonny Borrelli worked, forcing the county to comply with the Senate’s original and ongoing request for router access, on sight at the County buildings.

“Arizona State Senator Sonny Borrelli told us that because there is now a third party involved in this investigation and the election materials do not need to be moved, it will preserve the chain of custody and evidence. This will ensure the case is locked tight.

“Arizona Senate President Karen Fann shared this tweet, claiming victory. Fann: HUGE win for the AZ Senate today! Maricopa settlement gives us all the data needed to complete the review of the routers & splunk log to the most comprehensive election audit in history. We got everything we need and more. Maricopa County goes home with its tail between its legs.” 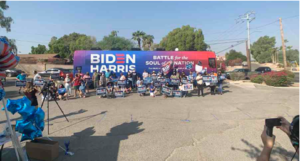 Anyone, regardless of party affiliation who thinks the career criminal imposter in the WH won Arizona is either uninformed, doesn’t care if cheating was the method used or has an agenda.  There simply is no way dementia addled, Joe Biden, won Arizona.  Biden was lucky to have 50 people show up at any appearance in AZ.  This is an October 2020 Biden rally less than a month before the election in Yuma, AZ.  I’ve seen more cars and trucks at a gas station when I’ve passed through Yuma.

Despite all the evidence – not hearsay or speculation, but concrete evidence, Gov. Ducey, a Republican, seems content to allow fraud to determine the outcome of an election in his state:

Arizona Governor Ducey Does It Again – Sides with Biden and Fellow RINOs No Matter What the Facts Are with the 2020 Election in Arizona, September 25, 2021

“What a piece of work – Arizona governor Ducey is at it again.  The corrupt politician will not adhere to the Constitution or back justice no matter what the facts. In late November while a presentation of the state’s irregularities and issues with the 2020 Election was going on, GOP Governor Ducey certified the state’s election results.

“If you look closely at Ducey’s past you can see why he backed a fraudulent Biden win in the state.

“Arizona Governor Doug Ducey has said there will be “no decertification” of the state’s 2020 presidential election results following an audit in Maricopa County that was highly anticipated by supporters of former President Donald Trump.

“Ducey, who is a Republican, took to Twitter on Friday to say the election outcome would not be decertified and that the law did not allow for decertification despite demands from Trump.”  Really, governor?  Let’s look at this:

Baltimore City election results decertified, May 13, 2016 – “It is not a recount of votes, according to an elections source. Instead, an audit is being done to make sure paperwork backs up the number of people who cast votes…The trouble started Tuesday evening, the state’s election chief says, when the city discovered 80 provisional ballots that hadn’t been counted.”

80 ballots.  Let’s look at what was found in AZ during the audit:  74,000 mail-in ballots recorded and counted were never mailed out by USPS (United States Postal Service).  Now, there’s a neat hat trick.  Biden allegedly “won” by 10,457 votes.

Maricopa County Audit Results Reveal Someone Was Caught on Video Illegally Deleting Hundreds of Thousands of Election Files the Day Before the Audit Started (Make no mistake, AG Brnovich will go after that person.  Want to place your bets he/she is a registered Democrat?)

Arizona’s Secretary of State is a rotten, corrupt Democrat who has never been acquainted with something called truth.  Katie Hobbs supports election fraud as long as it’s for her party.  No way will that poltroon decertify the vote.  Does that mean it can’t be done?  State legislators need to get up to speed on their plenary powers.

Republicans hold the majority in both the House and Senate in the AZ State Legislature.  There is NO excuse not to decertify the vote.  I do believe there will be criminal charges by their Attorney General but it’s up to voters in AZ – not just Republicans, but many Democrats and independents who also voted for Trump- and We the People to burn up the phone lines to Republicans in both the House and Senate.

If you are one of their constituents you need to make sure all your friends and family either call or email.  Let he/she know you are a voter in their district.

Short but to the point – you won’t get one on the phone, likely a staff member or recording.  Phone calls: Senate list.  House list.

Example of what to say:  “The 2020 election results are based on fraud and must be decertified.  Your state legislature has plenary power to make it happen with a Joint Resolution.  If we’re ever going to stop election fraud, this must be done or there will never be another fair election in this country.  Next time you could lose your election because of fraud.  Stand for the truth.  Have the courage to look our enemy in the eye and say:  I will not back down.”

No doubt once it’s done the Democrat/Communist Party USA will file as many lawsuits as they can to carry to next year’s primaries.  If AZ falls, they know Georgia will, too.  Republicans also hold the majority in their House and Senate.  And, pray, next is Michigan, then Pennsylvania.

You can email them; here’s the list of Republicans courtesy of (Ret.) Lt. Colonel Lawrence Sellin:

Sellin, by the way, sent them email asking one question:  “If you count only the legal ballots, who won the presidential election in Arizona, Biden or Trump? If you can’t answer that question definitively and without qualification, then you must decertify the election.”

Most important is they must understand they absolutely do have plenary power to decertify.

One thing to remember for all future federal elections:  Federal elections end at midnight.  State courts ruling mail in ballots can be counted up to 3 days or longer was in violation of a U.S. Supreme Court decision that has never been overturned:  Foster v. Love.  Almost every state in the Union violates federal law every election.  It has to stop.  Trump was ahead in those swing states last November.  All counting should have stopped at midnight.

I would say the same thing if the election was fair and as tragic as it would be, Biden won.  Truth doesn’t belong to any political party.Those late-night ballot dumps in GA should never have been counted.  Many of us tried to get this information to President-Elect Trump but I doubt it ever reached him.

The good news is gutless AZ Governor Ducey is being term-limited out next year.  Bad news, their Democrat Secretary of State, Hobbs, is running for governor next year.

NOT MAKING HEADLINES: AZ Audit Could Not Find the Identity of 86,391 Voters – They Don’t Appear to Exist and 73.8% Are Democrat or No Party Affiliation

Patrick Byrne Releases Wording from Executive Summary: “Based on the Audit the Results of the 2020 Election in Arizona Should Never Have Been Certified” UPDATE: Draft Report Added

UPDATE: Rock County Wisconsin Still Holds Key to 2020 Election — Nearly 20,000 Vote Switch — Will GOP Investigators EVER Look Into This? Only if voters there raise Hell.  If they don’t, it will happen again in the 2022 primaries and November 2022 general election.

Arizona Audit Final Report Was Watered Down: Reports from Cyber Ninjas Were Edited, Most Damning Statements Removed – What Else Was Removed?

PLENARY POWER: Legislatures Have It

Garland Favorito from VoterGA: We Believe We Can Easily Prove the Fulton Attorneys Were Misleading Court (AUDIO)

THE BIG QUESTION: Democrats Still Haven’t Explained How HUNDREDS OF THOUSANDS of Votes Were Dumped in Middle of Night for Joe Biden