Skip to content
Home/July 2017, Opinions/Baby Charlie Gard Story And The Culture Of Death

Baby Charlie Gard Story And The Culture Of Death

Last week, I visited a very pretty little church in Northern Italy.   It wasn’t your usual ornate church which you inevitably see in almost every town.   A simple wooden cross stood in the grounds, there were stunning views across a crystal blue lake, and there was an open air gallery of faded murals which depicted the 12 Stations of the Cross.

To reach the church you climb some very steep steps which lead off a small side street away from the main promenade of the town.  The air and the view become lighter and brighter as you ascend; but as you walk and pause at each station of the cross, depending on your understanding, you become acutely aware of suffering, of indignity, injustice, and of the cruelty of man.

Christ’s murder had to be the most cruel and undignified way of dying.

The sweetness of just standing there in those beautiful surroundings, in the open air, free from the constraints of brick and mortar, ritual and words, with the realization of what he overcame and what he did, had an instant healing affect.   There is a deep and meaningful message in silence which only he can convey to the human heart at times.   It stands in deep contrast to what the world’s view of love really is, and what it prides itself upon. 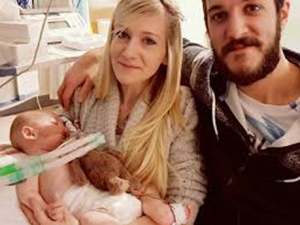 The current global furore surrounding baby Charlie Gard, who is currently in Great Ormond Street Hospital, London, silently waiting to die, after doctors have said there is northing more they can do for him, has once more raised some serious questions in our attitudes towards suffering.   It has also raised some questions about our National Health Service for many people.

There is a lot of discussion about compassion and dignity towards others.   There is also a lot of frustration being experienced by the public that the parents of Charlie have been denied the opportunity by the legal systems to take their son to America to try a new experimental treatment for him.

There also appears to be a global debate taking place, not least in British newspapers.   There is a divide on whether we should trust medical experts at Great Ormond Street Hospital and let Charlie ‘die with dignity’, or if the parents should have been allowed to take their son to America.

Thumbs up for yes, and thumbs down for no.

It all seems really sick and cynical when you think of his parents, and the anguish they are experiencing.  A decision has already been enforced.   Did they really have an option?    Surely, under these circumstances, the decision for Charlie’s health should have rested with his parents.   He is their son.  It has also been reported that they are not allowed to take Charlie home to die.

However, social media and the mainstream media are also playing a pivotal role in alerting us to something else.   It is the power and the authority that the government uses in what is called socialized medicine in relation to our children which is coming to the forefront.  Whereas, we once believed and trusted in the advice of doctors, a dictatorship appears to have been visibly rising which determines the outcome of health, outside of parental control.

It is not unusual to daily read of people who have been denied treatment because of the expense to the NHS, or to hear of desperate parents raising money to try alternative treatment available in America.  Although the British public pay all their lives from their taxes for national health care, the system is run and governed by the government.

Was the decision about Charlie about compassion, money or power?

Socialized Medicine:  “A system for providing medical and hospital care for all at a nominal cost by means of government regulation of health services and subsidies derived from taxation”.

When I read about the plight of the parents of Charlie Gard who had been denied the right to do what they could for their son, it also reminded me of the case of Ashya King who I wrote about some years ago, whose parents were the victims of an international hunt after they removed their son from a hospital in Southampton, without the doctors permission, and took him to Prague for Proton Beam Therapy which had also been denied him in the UK.

Social media had been adept at highlighting the cruel way in which the family had been treated during that time when they had been arrested and locked up in a Spanish prison. It was an embarrassing unfortunate case for the UK, which was very quickly covered up by the government’s intervention to then help them.

Labelled as irresponsible for putting their son’s life in danger, there was evidence of a certain ‘power’ and an ‘authority’ which had been exercised in over-riding the parent’s wishes, and actually arresting them.   So what is going on and do we really show compassion and dignity to those who are vulnerable and suffering or do these concepts of dignity and compassion really cover up a cruel system of power over its people?

Our Culture Of Death

As I turned the pages of a well known British Newspaper to read of the plight of baby Charlie, it was sad to see the love and the sorrow in the face of Mr Gard as he cradled his very poorly son.

On the next page of the paper was a picture of tennis player Serena Williams in the famous iconic nude pose now portrayed fashionably by celebrities who publicly wish to show off their baby bump.

And on the next page of the paper was the story and photograph of a transgender couple who have been allowed to not state the gender of their baby on the birth certificate until their baby is old enough to decide what they want to be themselves.

There were some very mixed and confusing messages in those particular images as I travelled along its pages.

And in a country where we are seriously considering and debating the abortion of babies up to full term for whatever reason, are we really a nation of compassionate and thoughtful people towards children.

A Matter of Inconvenience

Attacking human life, rather than preserving and protecting all human life, the term of ‘Antiquated’ and ‘Victorian’, was used quite recently in the House of Lords to pass its first reading to completely decriminalize abortion.

The ten minute rule bill led by Labour MP Diana Johnson and backed by the abortion industry BPAS cited section 58 and 59 of the 1861 Offences against the Person Act as being outdated and unfair.    It was reported that it was passed when women didn’t even have the vote and was not in line with modern day Britain!

Currently under this section women can be punishable by imprisonment if they bring about their own abortion; something which is often done by women purchasing on-line abortion pills.

From The Guardian, reporting on the bill, it states;

Johnson argued that the law was unfair and inappropriate in an age when women can and will access abortion pills by post because they want to be able to terminate their pregnancy in the privacy of their own home. [Link One] and [Link two]

Whilst Diana Johnson believes she is speaking on behalf of women in modern day Britain, progressing from an antiquated Victorian era, some men and women may also be shocked to know that the NHS has paid out £70 million pounds over the last five years to parents who would have aborted their baby if they had known their child would be born with a disability, and also to parents whose child has survived an abortion.  And this they call progress.

Known under the controversial term of ‘wrongful birth’ there is a great deal of controversy and division about taxpayers funding a culture which appears to promote disability as inconvenient.

In the Still of the Night

Sometimes, you have to inwardly leave the world of madness and cruel injustice to be still and find peace.   The air is fresher and much higher up there.   It is the place where true love resides.

Christ knew it.   His death was cruel but his life exemplified the real meaning of dignity.

In conclusion, whatever the outcome for baby Charlie, many people around the world are praying for him and his parents.

We hope their lives have been touched by the simple gestures; the hand up and the offer of hope and understanding amidst a cruel and twisted world of sickening contradictions.