Home/March 2019, National Headlines/Beto O’Rourke: The Selling Of Socialism By The Fawning Media

Beto O’Rourke: The Selling Of Socialism By The Fawning Media

Many Democrats already believe that Texas Democrat “Beto” O’Rourke is the man who can beat President Trump in 2020, however, one of television’s favorite physicians Dr. Drew Pinsky is concerned that “something’s not right” with the former congressman. And the good doctor didn’t even mention Beto’s arrests for drunk driving or burglary. (See Police Report at bottom of story). All of this is sure to deny Pinsky appearances on CNN, MSNBC, Good Morning America, the Today Show and the rest of the major news media outlets.

“I thought that [O’Rourke] was Tony Robbins (a huckster known for his infomercials, seminars, and self-help books including Unlimited Power and Awaken the Giant Within),” Pinsky, a board-certified internist and addiction medicine specialist, said on the “Brian Kilmeade Show” in response to audio of O’Rourke’s presidential announcement video.

Beto O’Rourke is a Texas Democrat who’s running for President of the United States against a plethora of Democratic candidates in the November 2020 election against GOP incumbent Donald Trump. On Thursday, Beto O’Rourke finally announced what most political pundits already believed: He’s running for President against an army of Democratic competitors. And while Rep. Alexandria Ocasio-Cortez — dubbed AOC by the fawning news media — appears to be carrying the Socialist Flag, Beto is thought to be better at contorting the English language.

Almost immediately, the national press began gushing over Beto. For example, MSNBC’s Chris Matthews who was famously mocked for his overt elation for then-candidate Barack Obama during the 2008 presidential election, where he said he felt a “thrill” up his leg for the Democrat. It appears O’Rourke is the new Obama, at least for Matthews.

“It should be noted that this was the same lefty host who hosted a pep rally disguised as a town hall for Robert Francis O’Rourke on October 30, 2018, and was nearly unanimous in terms of softballs compared to actual questions,” NewsBusters managing editor Curtis Houck wrote.

The El Paso, Texas Democrat was a political flop far before he entered the national stage. He’s frequently been caught lying, cheating, and misleading his constituents to the point where even his fellow Democrats hate him in his own city, according to Red State political reporter Brandon Morse.

According to a law enforcement colleague, Professor Jean Reynolds, in 1998 at 26-years old O’Rourke was arrested for driving while intoxicated (DUI) and attempting to flee the scene of an accident. That accident had become an issue in the senatorial campaign that he lost to Texas Republican Ted Cruz despite the financial backing of radical multi-billionaire George Soros and MoveOn.org. Prof. Reynold’s teaching experience includes a police academy and a prison school. 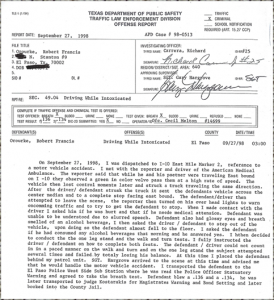 “I met with the reporter who said he was traveling west bound on I-10 and observed a black in color Volvo traveling the same direction at a high rate of speed. The driver then lost control of the vehicle and struck a truck traveling the same direction sending the defendants vehicle across the center median and pointing eastbound. The driver attempted to leave the accident but was stopped by the reporter. It was then determined after a brief interview that the defendant/driver was intoxicated. The defendant was then transported the El Paso Police West side Sub Station Where he was given the Breath Test. Subject failed.”

The reporter told me the following: