You can believe in whatsoever you like, but the truth remains the truth, no matter how sweet the lie may taste.  —Michael Bassey Johnson

Beware of false prophets, which come to you in sheep’s clothing, but inwardly they are ravening wolves.  —Matthew 7:15

To learn who rules over you, simply find out who you are not allowed to criticize.  —Voltaire

Moral principles do not depend on a majority vote. Wrong is wrong, even if everybody is wrong. Right is right, even if nobody is right.   —Bishop Fulton J. Sheen

President Trump loves America and he loves her people.  He knows he won the 2020 election, and certainly he knows that if he leaves office and allows Biden/Harris to become the new “presidents,” that everything he’s accomplished in four years will be overturned.  I simply cannot see him doing that when he knows he was cheated out of a landslide election.  Yet, he’s been through four years of hell by the enemies of freedom, both the Democrat Marxists and the neo-con Trotskyite Republicans.  Will our great warrior leave the ring, or will he continue?  We don’t know.

DJHJ Media reports, “The long-awaited report on foreign interference in the 2020 Presidential election from DNI Director Ratcliffe was delivered to Congress on Thursday, one day before President Donald J. Trump was denied access to using numerous social media outlets. A source admitted that the report was held back so Trump could not tell the American people or their representatives about the foreign influence on the election before they counted the electoral votes on Wednesday.”

This is typical of our intelligence community, is it not?  The hatred for this great president has been unparalleled.

If President Trump is leaving office on January 20th, why is he still working as though he’ll have a second term?

A friend of mine mentioned Trump’s recent actions:

All of the above, except the first item, can be revoked on Day 1 of a new administration. Why would Trump continue to work so hard if he is done?
Is this whole thing a charade?  Is he leaving to protect those close to him?  Has he engaged the loyal military – sub rosa – to act while he’s out of harm’s way?

My friend is right, these are reasonable questions to ask…and independent media is reporting that the President sent his family out of the White House and to a safe place on the eve of the 17th.

And here’s more…CNN reported on Sunday that the National Security Agency (NSA) is installing Trump loyalists as general counsel.  The NSA said that it was installing  former GOP operative and Trump loyalist, Michael Ellis, as the top NSA lawyer. Pelosi is going bonkers. Ellis accepted this job offer and his new roll will start on Tuesday…so if Biden is in control on Wednesday, Ellis will surely be immediately fired.

NSA Director Paul Nakasone is allegedly one of the “White Hats,” and Chris Miller, who I really don’t fully trust, is in charge of the Department of Defense.  Why did Chris Miller, who allegedly can’t wait to leave his job, order Ellis into the NSA quickly?  Things don’t add up if Trump is leaving office on Wednesday.

Georgia Attorney L. Lin Wood said, “Every lie will be revealed.”  He openly stated that 75% of the people elected Donald Trump in a landslide.  Neither Lin Wood nor Mike Adams of the Health Ranger Report believe that Trump can come this far and quit on us.  I love Lin Wood, I believe he’s a great man of God, and I believe he tells us the truth. As for Mike Adams, I’ve always thought of him as a sensationalist, but perhaps in the last few months he’s searched for sincere truth…we’ll see.  He has promoted lunatics who are total liars and therein lies the problem.  But watch his latest video and decide for yourselves. 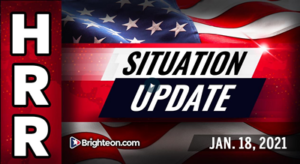 Prophets have forecast that Trump would win the 2020 election.  Well, he did, but the fraud perpetrated by the Democrat communists and their friends have snaked their way into stealing the “one man, one vote” American election from Donald Trump via their Dominion machines, the Smartmatic software, and the internet connections to foreign communist countries, including Russia, Serbia, Germany, Iran, Italy and our worst enemy, the Chinese Communist Party (CCP).

Americans who love this country have listened to frauds who are anathema to the truth, and they’ve believed them and forwarded their statements to our inboxes where they are filled with lies from false prophets and frauds claiming intel that has no basis in truth.  Too many false prophets have been lifted on high by folks are grasping at straws and want to believe Trump will save the Republic.  He may truly do that, but not through the false claims of men and women who believe they have a word from God.

Over five dozen emails by Charlie Ward, Janet Ossebaard, Robert Steele, and Simon Parkes have appeared in my inbox.  All of them proclaiming that the Insurrection Act has been signed by President Trump and a counter revolution is brewing to save the Republic.  Nothing these people have said is true.

The Capitol Hill riot on Jan. 6thwhere Antifa and BLM posed as Trump supporters undoubtedly at the behest of her highness Pelosi who allegedly told the Capitol Hill police to let them in, and Trump’s apparent concession speech the following day has caused these lunatics to become a YouTube phenomenon.These people and their compatriots have been promoting false truths and false hopesto Trump supporters who cannot believe Trump will allow America to fall into the hands of the Chinese loving American communists.

I have a hard time believing Trump will allow this as well, but I don’t listen to people who haven’t valid sources, neither do they have valid curriculum vitae nor documented legal or governmental status.  They are buffoons lying to the people who are praying the country will be saved from a communist takeover.

Let’s look at a few of them…

Simon Parkes has told disappointed Trump supporters that he is in direct contact with “Q,” who is supposedly a leading pro-Trump figure who has direct intel access.  Parkes is the shadowy figure supposedly leading a pro-Trump conspiracy to unseat corrupt and evil forces in Washington, D.C., and that there will be a great counter-revolution and legal disclosure in the next few days that will end with Trump being installed for a second term as president.  He has claimed the president signed the Insurrection Act… a blatant lie.

Parkes states on his website that his mother is a nine-foot green monster, that he’s had sex with an extraterrestrial alien and has an offspring with same and that he has sex with this alien four times a year and his wife is not happy.  Uh-huh!  And people are listening to this lunatic.

Unfortunately, Mike Adams believes these people and he needs to dump them, they are false friends and have no truth to impart to the people. Their goal is the money they make when you click on their deceptive tales of truth.

In the last few weeks of checking on Parkes, he has changed his website, and has also changed the “about” portion as well.

Dr. Charlie Ward is as sensationalist and as off the rails as is Parkes…both are Brits.  I have to wonder how much money they are making with their false documentaries and promises.

Robert David Steele is a blatant anti-Semite and I have no use for him whatsoever.  When you try to check his bio, his military service, or his education, you come up with nothing.   He’s either a very thorough fraud, or he’s legit and just completely off his rocker.  He is also tight with former Democrat Congresswoman Cynthia McKinney and has written an article with her.

These people are frauds.

Patriotic Americans hope and pray that we will be saved from an onslaught of never ending communism via the fraudulent and treasonous election of Biden/Harris.

For four years, our president has endured the attacks by the enemies of freedom.  He has risen above the charges, been found innocent of every one of them, and he has fought for our country and her people.

General Michael T. Flynn has also suffered for four years against a harsh and evil entity who wished to silence the man who knew the evil who came against him and well could have exposed it.  Deep State entities surrounding our president facilitated the expulsion of this brilliant man who spent 33 years serving his country.

Sidney Powell has worked tirelessly and without full compensation to save General Flynn and America from the same enemies who wish to destroy her and the patriots who love her.

L. Lin Wood preaches not only Bible truth, but truth regarding those who are the very enemies of our country. He knows them all.

The aforementioned people love America and love the Lord God Almighty.  Each of them has labored in their own way to save our beloved country from destruction.  God has had His Hand on each of them.

It is up to us, the American people who love freedom and liberty, given to us by men who pledged their lives and property for America, to take a stand against the evil pervading our country.  It must be done now.