Big Oil, A Cop Killer, The Pentagon, And Dishonoring America

In 1940, the nation was still suffering the economic depressions of 1929 and 1931.  Things were not looking good with the impending war in Europe which we would not become involved in until December of 1941.

Kate Smith knew America was still in a terrible economic depression. Hitler was taking over Europe and Americans were afraid we’d have to go to war.  It was a time of hardship and worry for most Americans. Families sat around their radios in the evenings listening to their favorite entertainers and no entertainer of that era was bigger than Kate Smith.

Kate knew the pain the American people were in and she wanted to lift them up, so she went to her friend, song writer Irving Berlin, and asked him to write a song that would make Americans feel good again about their country. When she described what she was looking for, he said he had just the song for her. He went to his files and found a song that he had written but never published, 22 years before – in 1917.

He gave it to her and she worked on it with her studio orchestra. She and Irving Berlin were not sure how the song would be received by the public, but both agreed they would not take any profits from God Bless America.  Any profits would go to the Boy Scouts of America. Over the years, the Boy Scouts have received millions of dollars in royalties from this song.

Our President was born in the 1940s, my decade as well.  When we finally had black and white television in the 50s, the two most prominent people viewed were Kate Smith and anti-communist, Bishop Fulton Sheen.  This was the America we grew up in and loved, an America whose citizens loved their country and knew why we honored our flag and stood to sing our National Anthem, and we knew why we stood as well.  It is for those who fought for our freedom and for those who paid the highest price. 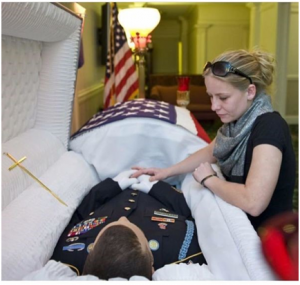 This is why we stand!

The Haslams of Knoxville, TN, own Pilot Oil Flying J.  It is one of the largest privately held companies in the country, which was founded by Jim Haslam, father of Jimmy Haslam and Bill Haslam, in the 1950s and has made the family billionaires. Bill Haslam is our Republican Governor, who campaigned in 2010 as a Christian conservative, and that’s a far cry from the truth.

Gov. Haslam supported Jeb Bush for President, was thrilled to be invited to the Obama White House, and got way too cozy with Education Czar, Arne Duncan.  On election day last November, the governor announced that he voted for neither candidate.  Gov. Haslam, like his close ally Sen. Bob Corker, has a long history of publicly criticizing President Trump. 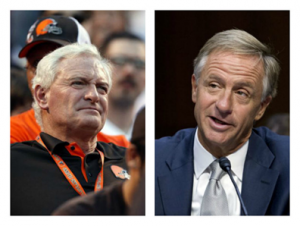 Now he has come out in praise of his brother Jim, who owns NFL’s Cleveland Browns, and is CEO of Pilot Oil, for aggressively attacking Trump over the disrespectful anthem kneelers along with some 30 other NFL owners.  [Link]

A number of truck drivers, veterans and everyday Americans are threatening to boycott the gas station chain Pilot Flying J over the actions of Jimmy Haslam, owner of the NFL’s Cleveland Browns, as well as the actions of one store manager in Kentucky.  [Link]

Several weeks ago, according to WSAZ, a group of veterans rolled up to a Flying J in the Bluegrass State and put up flags to welcome a rolling Vietnam Memorial. The manager of that particular store then came out and told the vets they weren’t allowed to fly the flags.

Another group of patriots are calling for a boycott of all Pilot Flying J locations because of the on-field protests by Jimmy Haslam’s Brown football players.  Jimmy Haslam allowed his team to take a knee during the anthem.  No respect.

Agents of the FBI and the Internal Revenue Service raided Pilot’s corporate headquarters on Lonas Drive in Knoxville on April 15, 2013. Records seized during that raid, together with secret audio recordings by informants, tell a story of customers shortchanged on millions of dollars in rebates and discounts on diesel fuel contracts with the nation’s largest truck stop owner, while sales executives laughed at clients behind their backs.

This rebate fraud scheme was revealed to the public in April 2013, but what was not revealed is that one of Pilot Flying J’s largest customers is the U.S. government, which buys hundreds of thousands of gallons of diesel fuel periodically for use by the Postal Service, and that the U.S. government was defrauded of its rebates in the same fashion as small private trucking companies.

Eight former and current Pilot Flying J employees were indicted early in 2016 in connection with the diesel fuel rebate scheme, and they’re scheduled to go to trial in October of 2017.

Of course, the Haslams deny any knowledge of this rebate scam, but here is the full story.

Back in July of 2012, I wrote a seven-part article about Governor Haslam, Water Rights, and Agenda 21 Corruption. Haslam was trying to give our TN water rights to the UN.  It’s bad enough that when Bill Haslam was Mayor of Knoxville, he promoted Agenda 21’s Smart Growth into Knoxville and the surrounding counties, but as governor, he tried to make deals with Norfolk Southern for intermodal rail yards. Governor Haslam’s goal in this deal was to supply diesel fuel for the trains at Norfolk Southern intermodal rail yards, and if he had made the deals he would have made another $25 million a year per intermodal for Pilot Oil, and there are now six.  Did he get it?  We don’t know.

The Governor promoted a six-cent tax increase on gasoline and a 12-cent increase on diesel.  The majority of TN Republican legislators are indebted to Haslam for helping them get elected, so they passed this atrocity on the citizens of TN.  What people don’t realize is that when an oil company collects this amount in taxes, they have 45 days to send the monies into the state.  That means that Pilot Oil Flying J can keep the funds for a month and keep the interest the funds earned.  Another plus for Pilot Oil.  The real atrocity is that this was done simply for gain, because the state has billions in their rainy day and investment funds…it was $6.7 billion in 2010.

And now, Pilot Oil Flying J has struck a deal to sell the majority of their company to Warren Buffett.

Our term limited Governor is considering a run for retiring Senator Bob Corker’s seat.  Of course, his sights are set on the White House, just like his good friend, Mike Pence.  Believe it when I tell you they both have plans, and Haslam has the money to fund a race.

He made the donation to Chicago-based “Assata’s Daughter’s,” named after former Black Liberation Army member Assata Shakur, in April as part of a $1 million charitable pledge.  Shakur was convicted of first-degree murder in the 1973 shooting death of New Jersey state trooper Werner Foerster and sentenced to life in prison, but staged a daring jailbreak and now lives as a fugitive in Cuba.

Chesimard shot and killed New Jersey state trooper Werner Foerster execution-style during a traffic stop.  As Officer Foerster lay on the ground wounded and helpless, Shakur grabbed his gun and blasted two shots into his head.

This is what Colin Kaepernick stands for, killing America’s law enforcement officers.

Jon Rappoport’s recent blog post exposes how some of the pre-game and halftime “patriotism” we’ve seen at NFL games—patriotism which, presumably, the kneeling players believe is hiding dark truths about America—has been paid for by the US Department of Defense.  The Department of Defense poured millions of dollars into the NFL in exchange for displays of patriotism during games.

So, does that mean that many of these NFL players have never been patriotic despite the fact that their own country has given them celebrity status and the opportunity to become multi-millionaires? 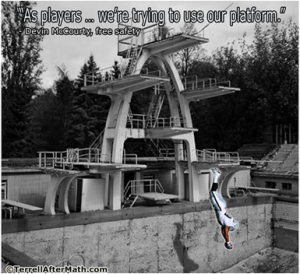 If standing for the national anthem has all along been only a marketing strategy, then perhaps we all should have turned off the NFL long ago.

Americans are actually destroying their NFL memorabilia after so many have taken a knee and refused to stand with their hands over their hearts for our National Anthem.

At least three members of the Dolphins — Kenny Stills, Michael Thomas and Julius Thomas — were seen kneeling during “The Star-Spangled Banner.” All three then stood for the British anthem, “God Save the Queen,” which was sung because the game was being played in England. So, they’ll stand for a foreign country, but not for their own nation.

Actions of the NFL

It was reported that the Raiders took the race war to their white quarterback, Derek Carr, and allegedly threw the game as a protest against him for not kneeling with them during the anthem.  Armstrong & Getty radio show pointed out that one of their fellow players said ‘If he wants to stand alone (for the National Anthem), he can stand alone on the field.”

The Dallas Cowboys actually knelt with their owner, Jerry Jones, prior to the anthem and then stood for the anthem.  Dez Bryant said they will not do that again, that it was a one-time effort against President Trump.  They will now stand with hands over hearts during the National Anthem.  Well, excuse me Dez, but you and your owner made a big mistake kneeling even once against our President. [Link]

They only did this because they saw the money coming to a halt.  Yes, it’s too little too late.

Anheuser-Busch is asking for specific feedback to NFL political protests. They want to know how you feel about NFL players kneeling during the National Anthem, and disrespecting the American flag. They want to know if they should stop supporting the NFL with advertisement dollars. Let them know that you think.  The automated system asks if you’re calling about the NFL. Press #1 to leave your message.  Call (800) 342-5283. 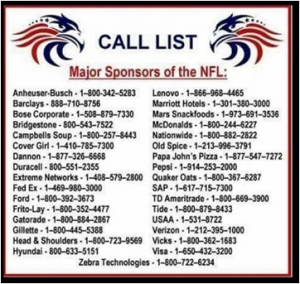 Here is the list of NFLs other advertisers, feel free to call any of them.

The fans of the National Football League are understandably angry with the decision of the players to disrespect America, her flag and her National Anthem. As a result, they are turning their business elsewhere.

The culture war has gone too far, racism and sexism are the two things used to destroy whatever the left wants annihilated.  Eight years of our first “black” President have created turmoil in America rather than bringing us together.  We are in a battle for our country in so many ways, and sadly many of our own people still don’t see it.

P.S.  Folks, if you saw Devvy Kidd’s recent missive, please help us keep NewsWithViews alive and well.  All of us who love America work very hard to research and bring you the latest political news.  Monthly donations are what keeps this website alive.  You can donate here. Or, send a check to NewsWithViews, P.O. Box 370, Merlin, OR., 97532. Thank you.