Blackrock, GlaxoSmithKline and the Great Reset

If we define an American fascist as one who in case of conflict puts money and power ahead of human beings, then there are undoubtedly several million fascists in the United States. —Henry A. Wallace, 33rd Vice President of the United States

All who wish to hand down to their children that happy republican system bequeathed to them by their revolutionary fathers, must now take their stand against this consolidating, corrupting money power, and put it down, or their children will become hewers of wood and drawers of water to this aristocratic ragocracy. —President Andrew Jackson

The system shaves the dice on the side of those with money and power, and anyone who believes otherwise deserves anything that happens to him. —James Lee Burke, author

In a previous article, I mentioned BlackRock, Inc.  Not many took notice or mentioned it, but now, BlackRock is finally hitting the news big time.  And they have influence, unbelievable influence with world leaders. In less than 30 years, this American financial firm has grown from nothing to becoming the world’s largest and most trusted manager of other people’s money.

Created in 1988, BlackRock gained its current power in the wake of the 2008 financial crisis. With the fall of Lehman Brothers, Wall Street was in the throes of free-fall: no one knew what thousands of their financial portfolios contained, what was hidden behind the derivatives, what was toxic and what was not, what was dangerous and what wasn’t.  They are the financial leviathan that bears down on Europe’s decisions and America’s.  The assets left in their care are more than $8.7 trillion American dollars.

In a recent article by The Conservative Tree House (CTH), i.e., The Last Refuge website, they exposed BlackRock’s connections to the illegitimate Biden administration.  The CTH author, Sundance, summarized the article, The Chairman of the BlackRock Investment Institute, the guy who tells the $8.7 trillion investment firm BlackRock where to put their money, has a brother who is the Senior Advisor to Joe Biden; has a wife who is the White House Personnel Director; and has a daughter who is now on the National Security Council.

BlackRock’s Chairman is none other than Tom Donilon whose literal job description for BlackRock is to: “leverage the firm’s expertise and generate proprietary research to provide insights on the global economy, markets, geopolitics and long-term asset allocation.”

Conflicts of interest and insider information.

Thomas Donilon is a member of the globalist Council on Foreign Relations and is Chairman of the BlackRock Investment Institute and Senior of Counsel at the international law firm of O’Melveny & Myers.  Like BlackRock’s owner, Donilon is a Democrat who has supported and advised every democrat president and candidate from Jimmy Carter to Hillary Clinton. 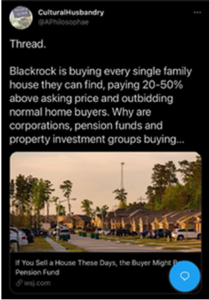 The connections are extremely telling.  However, what few people know is that BlackRock, among others, is buying every single-family house they can find, paying 20-50% above asking price and outbidding normal home buyers, especially in Florida, but other Red States as well. Corporations, pension funds and property investment groups are snapping up single-family houses, and even entire neighborhoods, to rent out or flip and are competing with American families –accounting for 25% of the sales in some cities.  Raw control by big money is the wholesale takeover of the housing market.

BlackRock is the world’s largest asset manager and the leading proponent of The Great Reset. They’re looking to redistribute $120 Trillion in housing wealth. Why does this matter?  Because for the lower and middle class, owning a home is the most major part of any financial success, and ensures their future upward mobility. This is wealth redistribution from the American middle class. Salt of the earth wealth heading into the hands of the world’s most powerful entities and individuals. The traditional financial vehicle called home ownership gone forever.

BlackRock, Inc is based in New York City and owned by Democrat Larry Fink.

They have filed an SC 13G/A form with the Securities and Exchange Commission (SEC) disclosing ownership of 377,284,263 shares of GlaxoSmithKline plc (US: GSK). This represents 7.5 percent ownership of the company. In their previous filing dated 2020-02-05, BlackRock Inc. had reported owning 376,159,235 shares, indicating an increase of 0.30 percent.

With stock in GSK, BlackRock is now in the development and manufacture of mRNA first generation Covid-19 “vaccines.”

GlaxoSmithKline plc (LSE/NYSE: GSK) and CureVac N.V. (Nasdaq: CVAC) announced a new $179 million collaboration, building on their existing relationship, to jointly develop next generation mRNA “vaccines” for Covid-19 with the potential for a multi-valent approach to address multiple emerging variants in one vaccine.

Emma Walmsley, Chief Executive Officer, GSK, said: “We believe that next generation vaccines will be crucial in the continued fight against COVID-19. This new collaboration builds on our existing relationship with CureVac and means that together, we will combine our scientific expertise in mRNA and vaccine development to advance and accelerate the development of new COVID-19 vaccine candidates.

GSK will also support the manufacture of up to 100 million doses of CureVac’s first generation Covid-19 vaccine candidate CVnCoV in 2021.

In 2018, Soros Fund Management also dramatically boosted its shares in BlackRock Inc., overseeing $6 trillion by nearly 60 percent to 12,983 total shares in the second quarter of 2018.  How lovely!

Larry Fink is in agreement with the French AXA. He even wrote a letter to the CEOs “highlighting issues that are pivotal to creating durable value” issues such as capital management, long-term strategy, purpose, and climate change. We have long believed that our clients, as shareholders in your company, will benefit if you can create enduring, sustainable value for all of your stakeholders.”

Realize all of this nonsense is about money and taxes…not about global warming or climate change, all of which is normal and cyclical. Link  The climate change comrades, the spiderwebs of big pharma control and the Great Reset are all wrapped up in one putrescent and treasonous package with BlackRock at the head of the pack.

Top dogs, stakeholders at the top of the communist revolutionary heap, those who committed treason to steal the election and destroy America from within…those whose gain-of-function and connection to Wuhan brought us the controlling and devastating destruction of small businesses in America…you think they weren’t culpable?  Think again…big money is in control.  The American people are being destroyed.  The American dream is being slaughtered in front of our eyes.

Wake up now and fight, or wake up later in a gulag when all is lost.