Home/Opinions, September 2022/Boomer Bashing and Other Stupid Trends in America

Boomer Bashing and Other Stupid Trends in America

Who hasn’t been exposed to the ongoing boomer and millennial bashing?  I’m sure there are insults to other generational demographics, I just can’t think of any right now.  But slamming a “boomer” or a “millennial” is sure trendy today.  And it’s exhausting.  Seriously.

For those of us who have been laboring to bring unity in an ever increasing divided states of America, to say this is counterproductive would be a tragic understatement.  What’s to be gained by this besides more schisms, fractures and dissension?  Generation bashing is the equivalent of racism but in a different demographic.   One has no more control over the time one is born than they do the place or the parents or the culture they are born into. 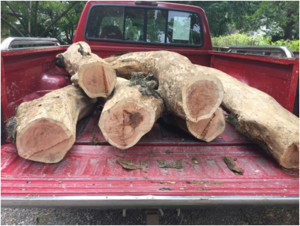 And I’m not a boomer, let’s be clear.  But I’m married to one.  And yesterday I was walking past a park where they were taking down a diseased oak tree.  I mentioned it to my husband in case they would be willing to let him pick up the wood.  We parted ways to run errands and when I returned, I found the pickup loaded with these logs that filled up the length of the full size truck bed.

He picked them up himself – all by himself, loaded them into the truck and will soon cut and split them.  Again, he loaded these logs by himself, without complaint or request for assistance.  This boomer does the work of someone half his age on any given day, and hasn’t felt a need to wage war on another generation less inclined.  He came from a background of poverty, got his first job at twelve throwing papers from his bike after school, worked his way through college with a bachelor’s of science in education K-12, and has worked the last 33 years for UPS in daily manual labor because it paid better than teaching.

He has worked 50-60 hour manual labor work weeks for over three decades to provide for his family of six.  He didn’t require his children to get jobs at twelve years old because it was hard for him when he was that age.  He sacrificed to give them what he never had in an effort to make their lives somehow better than his own with better opportunities.  [And just like my boomer husband doesn’t fit the stereotypical assessment of boomers, our millennial daughter doesn’t fit the stereotypical assessment of millennials.] 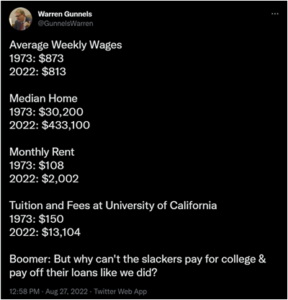 So when I see statements like this, I’m reminded that ignorance and indoctrination is alive and well in America.  To think someone thinks this a sound argument is a scary barometer for the current climate and culture of America.

It somehow ignores the realities of numerous factors, none of which have anything to do with being a “boomer” or not.  What his statistics prove is the devaluing of the dollar and economic duress of a nation under bad policies.  What it ignores is the responsibility of the individual to his personal commitments.  In most cases, debt is still a choice, especially debt for a secondary “education” (and I use that term with tongue in cheek).

If the cost of inflation is the qualifier for debt “forgiveness”, then let’s forgive the mortgages and car loans while we’re at it.  But it’s not about offsetting the inflation our politicians caused.  It’s about transferring wealth from the middle class taxpayers.   Let’s be clear, the banks aren’t forgiving the debt and swallowing the losses.  They’re just stealing from working class Americans to pay it back, with interest.

What is also abhorrent in this argument is that now somehow certain selected individuals who make certain (maybe poor) choices can be bailed out irrespective of contract or commitment.  When did signing names in an agreement between two parties become discretionary to the U.S. Government?  Have we really fallen this far as a nation as to think the U.S. Government has the right to absolve personal responsibilities and put the responsibility upon unrelated individuals?  Are honor and responsibility out of fashion?  Is integrity passé?

If the U.S. Government wants to take responsibility for its insane “lending” practices, then take the money from the U.S. Government institutions that created the problem, not the taxpayer.  Absolve the IRS’s new 87,000 salaried roles, or the Department of Education, or any other useless U.S. bureaucracy and its inflated budget to pay for their bad policies, but don’t use U.S. taxpayers to “fix” the problem they created.

But back to the boomer argument.  A nation so entrenched in fighting each other is a nation on the brink of its enemy’s victory.  Divide to conquer is one of the oldest strategies of war.  Take an inventory of the ever-growing schisms of America.  [race, socio-economic classes, religion, sexual orientation, etc.]  If our enemy can keep us consumed with defending our particular life definition, we fail to see the need to defend and protect our neighbor.  This is basic Christianity 101.  Love your neighbor.  This is the premise of the Declaration of Independence and the Bill of Rights.

The raging against a generation of people is misguided rage against a system that has been deployed to destroy the fabric of America.  You’re not mad at boomers, you’re mad at policies from the boomer era that have hamstrung economic progress, and you’ve misapplied them to your neighbors because they use simplistic language to express their own frustrations.  It’s like yelling at the mighty Oz on the screen, but you ought to be mad at the controller behind the curtain.

Boomers are the last generation with the old traditions of America.  They were raised for the most part by two parent families, by the sweat of the brow, at a time moral integrity was still a virtue, and overcoming difficulties was a challenge they took with pride.  They endeavored to 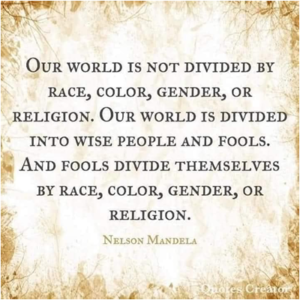 make their world a better place for their posterity, and by world I mean family life.  So when they see things in place today in a society they don’t recognize or want, they revert back to what they had to do to overcome.  (hard work, personal sacrifice, refocus on the basics, faith)  They were so busy making a living and building their family life that they didn’t realize their elected officials were selling out to the highest bidder, and that there was a conglomerate intent on dismantling the principles of the land they loved.  They existed at a time the subterfuge was still underground, and they thought America was still wholesome and moral.  They didn’t know what they didn’t know.

Every generation from the boomers forward has its own set of difficulties or trials, mistakes and failures.  At some point we have to stop blaming people groups and realize how badly we’ve all been duped by the powers that be, and unite for the sake of our future as free people.

The destruction of America has been plotted systematically for generations, and each generation the cabal has made its attack on the institutions that would prevent its end goal.  They’ve made substantial gains at significant times, and to place the brunt of the responsibility on the generation some of the worst gains were accomplished is to turn on your fellow Americans.

I would wager a guess that person for person in each generation would find the boomer generation has the most guns per capita of their generation than any other generation.  They probably have the most patriots who still genuinely care about the nation and would be willing to lay down their lives for it.  Why would you alienate these people because they can be lumped with a time some of the most damage via policies was done?