A top Washington, D.C. legal firm and think-tank announced on Wednesday that it had hand-delivered a biting letter to members of the U.S. Senate regarding the shenanigans and false statements of a New Jersey Democrat elected to the U.S. Senate.

The letter was addressed to the chairman and co-chairman of the U.S. Senate Select Committee on Ethics and calls for a full and non-political investigation into Senator Cory Booker’s, D-New Jersey, who admitted he violated Senate rules by releasing what he believed were classified records onto his Facebook, Twitter and other social media accounts.

According to the president of the phenomenal Judicial Watch, Senator Booker faces expulsion from the Senate for his violation of the rules. This isn’t the first time Booker finds himself the target of a government probe. He was also the target of a corruption investigation after several of his Newark, New Jersey Mayor’s top staff were indicted by a federal grand jury. Booker won his Senate seat at the right time so that he was able to avoid an indepth criminal investigation or grand jury indictment.

Sen. Booker confessed that he violated Senate rules when he issued a tweet on Friday, September 7 saying:

“And the classification of many documents as “Committee Confidential” is a sham… I willfully violate these sham rules. I fully accept any consequences that might arise from my actions including expulsion.” 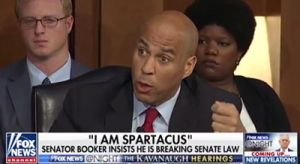 “Senator Booker, in an absurd invocation of ‘Spartacus,’ explicitly invited his expulsion from the Senate in his egregious violation of the rules and contempt for the rule of law and the Constitution,” stated Judicial Watch’s Tom Fitton. “Will the Senate assert the rule of law in the Booker case or allow mob rule to be the new standard?” Fitton asked rhetorically in his letter to the senate leaders.

The Judicial Watch complaint is reprinted below:

Judicial Watch, Inc. is a non-profit, non-partisan educational foundation that promotes transparency, accountability, and integrity in government and fidelity to the rule of law. We regularly monitor congressional ethics issues as part of our anticorruption mission.

And the classification of many documents as “Committee Confidential” is a sham … I willfully violate these sham rules. I fully accept any consequences that might arise from my actions including expulsion. 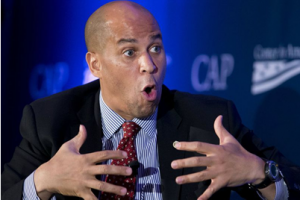 By publicly releasing Committee Confidential records, Sen. Booker appears to have violated provisions 5 and/or 6 of Rule 29 of the Standing Rules of the Senate (Rev. Jan. 24, 2013), which stipulate:

We hereby request that the Senate Ethics Committee conduct a preliminary investigation into whether Sen. Booker violated Senate Rules by releasing Committee Confidential records through his social media accounts.

Senator Bill Nelson, D-Florida — also recently made claims that Russian agents “have already penetrated certain counties in [Florida] and they now have free rein to move about.”

According to press reports: “[Nelson] added that voting machines in Florida have already been compromised by Russian meddling. Moreover, “[Nelson] has said repeatedly and unequivocally since Aug. 7 that Russia has access to election systems in Florida and could eliminate individual voters’ records.

” Nelson’s statements were not simply political remarks, but declarative statements about an issue extremely important to citizens and implicating the validity of our elections. Nelson made these declarations with the authority and credibility of the Senate, which has access to classified information not made available to the public.”

“Yet, there is no publicly known evidence supporting the veracity of Nelson’s remarks. Consequently, it appears either Nelson’s claims are based upon, and discloses, classified information he obtained from his position as a Senator, or evidence does not exist and his statements were false. In either instance, it appears that Nelson has violated Senate Rules and Regulations,” said Tom Fitton.

Questioned about his peculiar and shocking claim, Nelson insisted that he had information that election officials in Florida were not privy to. This gave the media, always looking for a way to protect Democrats, a green light to write stories that gave Nelson the benefit of the doubt. These stories were cast in a way to make the reader think about the vast gulf between state and federal government.

Only problem is that now the federal government has come out to say that no, they don’t have any idea what Nelson is talking about, either.

“Although we have not seen new or ongoing compromises of state or local election infrastructure in Florida, Russian government actors have previously demonstrated both the intent and capability to conduct malicious cyber operations,” DHS secretary Kirstjen Nielsen and FBI director Christopher Wray wrote this week. “DHS and the FBI will continue to notify any victim of a successful cyber intrusion into their election network in any jurisdiction nationwide. Every local jurisdiction could be a potential target this election season, whether through malicious cyber operations or influence operations.”