There’s a charlatan running for State Representative in Kansas.  By profession and testimony he is a “Christian pastor” of a “Christian Church” in Topeka, Kansas.  Allegedly they use the same Bible as the Christian faith, and profess to be “Christians”, adherents of the teachings of Christ.  In practice they endorse same sex marriage and abortion.

Whether he has also deceived himself as well as his followers is uncertain yet, but it appears he has deceived himself to believe that a follower of Christ is to openly practice sin, even murder, and to also endorse it as a tenet of the Christian faith. 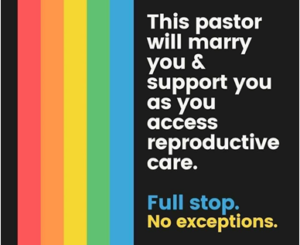 I expect such a belief system in the Democratic party (and other political ideologies), but it is counter to the principles of the Christian faith.  And if Tobias Schlingensiepen was just another Democratic candidate, I would not bother to point out the heinous fallacies of his posturing for the redundancy of the current political climate.  But it is because he alleges to be a spokesperson for the God I serve, the God of Abraham, Isaac and Jacob, and the God of Christ, I am compelled to contend for the faith and expose the deception at work.

To espouse such political ideology as congruent with Christianity indicates either a gross ignorance of the Christian faith or a deliberate perversion of it.  Those using a paid and titled position of leadership in an alleged so-called Christian church to deceive those entrusted to one’s care are reminiscent of the Pharisees of Christ’s day.

To be clear, the God of Abraham, Isaac and Jacob is also the God of Creation and the Father of Christ.  This is one and the same God of the Christian Bible.  God established a created order at Creation that is neither ambivalent nor vague.  The established created order by the Creator of all life created humanity as two genders necessary for one another for procreation on the earth.  Any other union is not sanctioned by God and rejected as a perversion to the created order.

[The gods of the world (Baal, Moloch, Isis, Rah, Zeus, etc.) openly practice such perversions because they defy the Supreme God and seek to pollute the world with fruits of darkness in their effort to usurp God by entrenching the world in darkness.  Study Baal-Peor rituals and worship to understand the origins of no-boundary sex[1].  Scripture is PLAIN about God’s views of such.] [See: Enemies Within the Church]

The days of Noah were precisely of this scenario.  The sons of God, the presumed fallen deity of the divine council of Psalm 82, schemed to corrupt God’s creation of mankind.  Enoch lays it out plainly, telling us they came down in the days of Jared to corrupt human flesh, and made a pact together for their actions.  Moses speaks of it in Genesis as well.  Most of modern Christendom doesn’t delve into the origins like this.  Most Christians are content to just accept God at His word that certain acts are sin, separate from the will of God.

Sin separates us from God, which is why the powers of darkness deceive humanity in order to enslave them…. “Did God really say?”  [Genesis 3:1]  Once we rebel from God’s authority and embrace whatever seems right to us or desirable for us, the power of darkness succeeds at estranging humanity from God.  We become enslaved to powers of darkness, which pollutes the land and increases the (spiritual) darkness in the land.

You cannot read Leviticus 18:22 (what Tobias followers call the “Klobber passages”) and be hazy on the intentions.  The act of homosexual sex is abhorrent to God, an abomination, and perverts the created order of procreation (and is impossible for procreation).  This was given to Moses from God Himself, the God of Abraham, Isaac and Jacob, and the same God of the whole Bible.

You cannot read Romans 1:18-32 and be hazy on the intentions of the writer (Paul).  These “lusts of impurity” – spelled out plainly and called “degrading passions” – are the result of rejecting the rule of God and His established order in one’s life.  Such people see fit to not acknowledge God and His ways, and as a result, God gives them over to their lusts and depraved minds.

Tobias Schlingensiepen openly marries gays in his church (or wherever they choose) in a state that does not acknowledge gay marriage and in fact, still has laws against it[2].  He does so as an alleged spokesperson of the Christian church.  He openly flies the gay flag and adorns his pulpit with it, all while proclaiming this is “love”.  No.  It is disobedience to the precepts of God.  It is rebellion.  It is perversion.  It is a lot of things, but it is not representative of God whatsoever, no matter how much you object that it is. 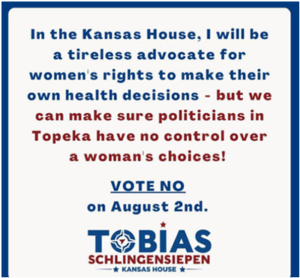 Schlingensiepen supports abortion, even advocates for it as “women’s healthcare”.  Yet when I commented on his Facebook page and asked if he would advocate for all women and their healthcare needs such as women who do not want a vaccination, my comment disappeared shortly after with no answer or explanation.

How disingenuous to label unrestrained abortion as “healthcare”.  Maybe before the sonogram we could be excused for such ignorance, but no more.  Everyone who knows anything knows a baby is murdered to obtain an abortion.  [If it’s not a baby, you’re not pregnant.]  Before that baby has done good or bad, it is cruelly dismembered, or burned, or otherwise tortured and murdered.  THAT is innocent blood on the hands of men and women, industries, legislators, and a whole host of willing participants.

You don’t have to look long or hard in Scripture to know what God thinks of the shedding of innocent blood.  At the very first murder we are told the blood of the victim cried out to God from the ground.  There is an accounting for innocent bloodshed, and God is neither blind nor deaf to it.  To promote it as a Christian principle and a human liberty is to disregard and mock every principle of God’s created order.  To feign love or Christianity through the advocacy of baby murder is not just disingenuous but wicked and deceptive.  (I would think an honest heart would see through such a facade, but alas, even honest hearts are led astray with the cunning lies of smooth lips and darkened hearts.)

So in District 55 of Kansas, near the center of Topeka itself, sits an alleged Christian church with a salaried pastor who not only condones and applauds homosexual marriages, but also performs them in defiance of state law and God’s law, and who also advocates for the murder of babies under the lie of “healthcare”.  He proudly promotes his beliefs under the hypocrisy of “Christian”, and runs his political campaign with such beliefs heralded.  (as a democrat, of course) 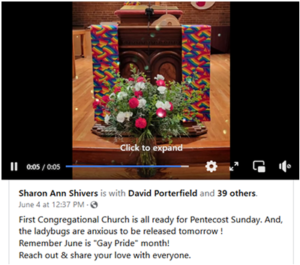 I openly call upon Mr. Schlingensiepen to repent of his lies about God and who God is, and to change his mind and turn from an open advocacy for sin and murder.  Repent and stop leading others astray from the path of righteousness.  Repent, and if you won’t do that, resign from a position of leadership in the arena of Christianity.  Your heralded beliefs are an affront to the laws of God and Christ, and do not represent the God of Abraham, Isaac and Jacob, the God of Christ and the Bible.

Know, Mr. Schlingensiepen, that God loves you and has provided you an opportunity to repent from maligning His Name and leading the simple and wayward from God and His Ways.  Know that God is merciful and will extend mercy to you if you just repent and align with His Word.

If you will neither repent nor resign, I call upon the Ancient of Days and I make my appeal to the God of Creation, the God of Abraham, Isaac and Jacob, and to Christ Himself to judge and remove the rebellious imposter of the Christian faith in whatever manner Heaven sees fit.  I make my appeal to Heaven and to the courts of Heaven to reign sovereign in this matter, that all those in District 55 of Kansas may know and see there is a God in Heaven who is merciful and gracious, long suffering and abounding in goodness and truth, keeping mercy for thousands, forgiving iniquity and sin, but by no means clearing the guilty3.

I call on the Supreme God to reign supreme over the works of Baal and the workers of darkness pretending to be servants of God, but instead promoting the works of darkness.  I ask God to make a distinction between those who serve Him and those who do not, and I beseech the Ancient of Days to rule against the unholiness of Mr. Schlingensiepen if he refuses to repent.  This is my appeal to Heaven.

[1] Email me if you want more information on Baal-Peor and the customs and rituals connected to it, and how it ties to sexual perversions and lauds licentious acts for its rituals.  The motive behind such action is to corrupt the pure order God established for humanity and to corrupt humanity itself.  Some articles are explicit so I have chosen to share them by request only.

[2] The Kansas Constitution, in Article 15, subsection 16 (page 27 of link), the Kansas Constitution defines marriage “between one man and one woman only” and classifies any other union as void.  This has neither been repealed or amended.  The DOMA (Defense of Marriage Act) reinforced the state laws, but individual counties are choosing to not enforce the law.  And this article touches on the issue specific to Kansas as well.