A freelance undercover journalist who goes by the name Janelle P recently met with Roman Catholic nuns and Protestant missionaries to discuss their work among North Korea’s sex-trafficked women who are currently hiding in China.

Those lucky enough to escape the brutal border guards of dictator Kim Jong-Un’s massive military must now contend with the anti-Christian policies in China. There have been disturbing reports emanating from China that reveal that President Xi Jingping has implemented an economic crackdown on the country’s poorest and most marginalized people — the Christians, both North Korean refugees and Chinese citizens who follow Jesus Christ.

According to Janelle P, reporters who are seeking the truth and not some hidden political agenda have uncovered what may be the most unfair and treacherous pay-for-play scheme ever created. “China’s Communist Party Chairman Xi Jingping has mandated that impoverished Christians and churches take down symbols of Jesus Christ and the cross and replace them with his likeness. The penalty for not adhering to this obvious idolatry is a threat to withhold government resources,” she wrote in an emailed press statement 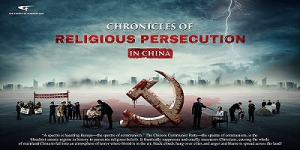 Under the Chinese Communist philosophy, citizens and migrants rely on the heavy-handed government for all creature comforts including shabby, second-hand clothing, minimal shelter, and even the ability to purchase food. While the world sees and hears about the Chinese economic boom, few are witness to the degradation and mercilessness of a country with an underbelly of corruption, brutality and injustice.

The Chinese battle against Jesus Christ and his teachings continues daily which has only increased the ongoing efforts to enforce atheism.

While the Asian superpower with populous numbering in the billions now enjoys a growing population of more than 100 million believers, upwards of 1 million Christians reside in Yugan county region alone. They have been widely viewed as a threat to state-sponsored secularism and as such remain one of the poorest locations on the globe. 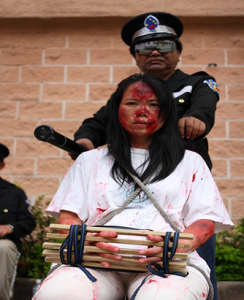 In its attempt to prevent the conversion of more believers, the atheist government subsidizes a huge propaganda campaign to convince members of China’s Christian population that strong ties exist between their poverty and their foolish faith. The brainwashing process includes the claim that only the Chinese government in the tradition of Chairman Mao Tse Tung and not the Son of God, Jesus Christ, can help lift them out of the gutter, provide safety and security, and help restore nutritional and health needs.  [YouTube Video]

In other words, government is the answer to their silent prayers whether they like it or not.

“China utilizes what has been called a ‘poverty-relief fund’ to assist its most vulnerable citizens when they suffer economic setbacks. The government recently made it abundantly clear those that do not strike down Christian images and replace them with large posters of Pres. Xi will be cut off from these life-supporting resources. The brutal attempts to coerce people of faith amounts to an official worship the Communist leader or starve policy,” wrote Janelle P.

The news report indicates that more than 600 Christian symbols have been removed, and more than 450 images of Xi have been put in their place. Many of the images of Jesus and the cross were displayed inside the private homes of the poor Chinese citizens.

The message to Christians across China has been heard loud and clear: either turn your back on Jesus Christ, or go hungry. [YouTube Video]