Creating War While Leading Through Opposition

[NOTE: The opinion in this article is the opinion of the author and is not the opinion of NewsWithViews.com, it’s employees, representatives, or other contributing writers.]

Fake News Media is “the enemy of the American People.” –President Donald Trump

There is less than 21% approval rating for the American media.  The reason is that people in this country understand that it is nothing more than fake and contrived news! Yet, they remain in the present, continuing to lie and to further their agenda by promulgating propaganda, as well as driving support for Donald Trump, as a leader of the opposition. The more the media attacks him, the more support that he garners. 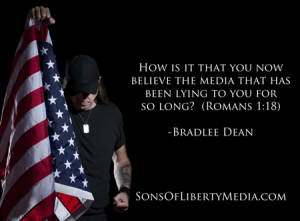 Those pulling the strings behind the corrupt politicians knew that Hillary Clinton never had the support of the American people anymore than John McCain had running against Barrack Hussein Obama.  Sad to say, it took the American people 8 years to figure out that he did everything opposite of what he promised. It was an easy fix.

Fake News now seems to apply to those who are for the Law and the United States Constitution while they expose corruption wherever it may be, even when it hits their favorite politicians. The enemies of America are thankful for people that remain ignorant of their enumerated laws (Hosea 4:6).  So far, the majority of the American people have been very accommodating.

“How fortunate for governments that people never think.” –Adolph Hitler

I reported earlier this year, 70 years of CIA propaganda and corruption, and how disinformation is exactly what they have been spewing out of the CIA for a long time, not only in our country, but in other countries, as well.

Dr. Udo Ulfkotte came out in 2016 exposing the CIA by stating the following:

“Taught to lie, to betray the people and not to tell the truth to the public.”

“The CIA gets control over all of the majority of journalists.”

Dr. Ulfkotte dropped dead inside of a year of making those claims.

If you don’t believe what he said, then you deserve what you have coming.

What they say that they do and what they actually are doing are two different stories. The fruit of the CIA has been war, world destabilization, media propaganda, murder, bribery, etc. Listen to former CIA agent John Stockwell:

“It is the function of the CIA to keep the world unstable, and to propagandize the American people to hate, so we will let the establishment spend any amount of money on arms. ….”

Of course, they have been in cahoots with the military industrial complex, which President Eisenhower warned Americans about back in January 1961. [YouTube Video]

The CIA has become a propaganda outlet.

“We’ll know our disinformation program is complete when everything the American people believe is false.”

So, how is it that when their favorite politician moves into the White House, all of a sudden, the things that he does, regardless if they are constitutional (legal) or not, as long, (as he has on your favorite jersey) all is accepted? This is exactly what is happening in America.  Once again, it’s a different President, but the same illegal and unconstitutional policies and agenda moves forward. However, as long as you like him, that is all that matters. Where have America’s principles gone? (Jeremiah 5:21)

“Kings will be tyrants from policy, when subjects are rebels from principle.” –Edmond Burke

Americans must adjust to changing times and still hold to unchanging principles (Psalm 119:89).

“For a people that value its privileges above its principles soon loses both.” –President David Eisenhower

Now, we have Hillary Clinton and Donald Trump agreeing as to what should be done with Syria.  Yet, Donald Trump promised a special prosecutor to investigate her for her crimes against “We the People.” He launched 59 Tomahawks in Syria, but refuses to bring forth “the rule of law” concerning corruption here at home? How do they attempt to justify their aggression, they tell you that they have chemical weapons that could be used against us.  Apparently, Americans did not learn that inciting the people to war first comes with a threat regardless if it is legitimate or not. Remember Weapons of Mass Destruction in Iraq under the Bush administration that could never be verified?

That was before Donald Trump became the president, and after he told the American people that they “owed her [Hillary Clinton] a major debt of gratitude” for her service to our country. [YouTube Video]

How many scandals are exposed concerning these corrupt politicians like that of Nancy Pelosi and Chuck Schumer, and now that Donald Trump is the president, they now agree. Are the flags going up yet?

There you have it.  The same world leaders who have been used to lie, steal, kill, sell their people out and wage war across the globe are in concert praising the new President of the United States of America.

How is it that you now believe the media that has been lying to you for so long?  (Romans 1:18)

This is pro-wrestling at its very worst.

Are they now telling you the truth because it is Donald Trump who is the president?  Hypocrites!  Again, isn’t Donald Trump the one that has called out American media resources as “Fake News Media” and the “Enemy of the American people?” America, this is leading through opposition.

As more troops are sent to another war, remember, it will not be Donald Trump’s young men and woman that will fight that war.  It will be our fathers, mothers, brothers, sisters, neighbors and children that will fight these unconstitutional wars.

“The man who can look upon a crisis without being willing to offer himself upon the altar of his country is not fit for public trust.” -President Millard Fillmore

What is it that Trumps administration is not telling you?

Let a former United States Marine tell you what the American media will not. [YouTube Video]

Another Canadian journalist exposed the lies of the Western media and the US about the war in Syria. [YouTube Video]

Hopefully, this will sum up the whole of what I am saying for those who have not learned from the past.

Every one of these warmongers claimed to be Christians (Matthew 7:16; 2 Corinthians 11:14).

Remember, war is the rule of force. Peace is the reign of law.

When was it America’s job to police the world?

“We Americans have no commission from God to police the world.”

“The Law…Expressed in orderly constitutional methods, is the only King to which we bow.” –President Benjamin Harrison

Furthermore, how many of these above “wars” were constitutional?

America, do you wonder why you are so hated by other countries?  You are hated because of what you allow your representative government to do to other countries, in many cases without provocation.

The best way to enhance freedom in other lands is to demonstrate here that our Republican system is worthy of emulation.

America, when are you going to figure this out? (Psalm 11:3)