Home/November 2017, Opinions/Democrats Circle The Wagons To Protect Their Sexual Predators

Democrats Circle The Wagons To Protect Their Sexual Predators

Rush Limbaugh has said many times that the left is always unhappy, they have no joy in their lives, and I fully believe he’s right.  During the eight-year reign of the Marxist Muslim, I never became depressed or unhappy.  Of course, most of us were appalled at everything he did, but we went on with our lives.  We didn’t march, we didn’t destroy public property, we didn’t do any of the things the left is doing in “resistance” to Trump’s election.  Neither did we ever publicly promote Obama’s assassination.  The left however, is desperately unhappy…let me give you a personal example.

The day before Thanksgiving, I saw my Hillary-loving neighbor out walking and she told me that her husband’s brother had just died, and she was preparing Thanksgiving dinner because family were coming.  Later in the day, I took early Christmas gifts to her that she could use to entertain family and mentioned that losing someone at a holiday always seems more tragic and depressing.  She said, “Well, we’ve been sad and depressed for a year because of the sexual pervert in our White House.”  She knows we supported Trump, but she just can’t resist saying terrible things, and she knows I never said a negative word to her about Obama.

This gal and her husband both take anti-depressants. How sad that these Democrat socialists truly are absolutely miserable, just as Limbaugh has said so many times.  I feel sorry for them, and the MSM blinds them to the massive sexual misconduct of Democrats, and now her beloved Charlie Rose is gone as well.

Sexual misconduct and sexual perversions seem to be the hottest media topic of late.  Here is a list of men accused of sexual harassment or assault, but it is by far incomplete.  NFL football players alone would fill stacks of pages, not to mention Hollywood, media, businessmen, and of course, politics. All are in the forefront of the news now.  The Daily Wire lists even more, note the number of Democrats, and now several more accusations against Bill Clinton.

A friend suggested it is being done to desensitize Americans just as they have done with other societal perversions that were once considered immoral.  Already this immoral conduct has become so pervasive that we tend to ignore it.

Media portrays all Republicans as definitely guilty of the charges, but Democrats are given a pass and defended by the MSM.

Congressman James Clyburn (D-SC), commenting about Conyers and Franken, said, “You can’t jump to conclusions with these types of things.  For all I know, all of this could be made up.”  Right, but you never say that about Republican politicians, do you Congressman?! 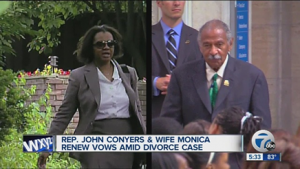 Congressman John Conyers (D-MI) and Senator Al Franken (D-MN) have both been accused of sexual harassment.

Conyers married his wife Monica when he was 62 and she was 25.  Monica Conyers is a former Detroit City Councilwoman who served time in a federal prison in a City Hall bribery case. [Link]

Conyers has been accused of sexual misconduct by two women, and he faces an ethics committee investigation, which basically means the good ole’ boys will cover it up. Lawyer Melanie Sloan alleges verbal abuse and excessive and rude criticism of her personal appearance by Congressman Conyers.  She told the Detroit Free Press that Conyers “constantly berated her, screaming at her and firing her and then rehiring her several times.” She maintains that none of the abuse was sexual in nature, but she claims the Congressman did attend a meeting wearing only his underwear. [Link]

Gateway Pundit is now reporting that according to affidavits, Conyers even used taxpayer money to fly women into D.C. to meet with him in hotel rooms!

Townhall is reporting that the 2006 staffers felt like ‘house servants,’ and baby sat Conyers’ kids six weeks at a time. 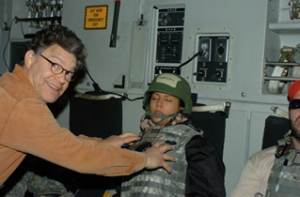 Leeann Tweeden, a radio news anchor with KABC in Los Angeles, said Franken forcibly kissed and groped her when they were overseas entertaining U.S. troops, in 2006. [Link] Franken’s sexual misconduct woes became a campaign issue in the Minnesota governor’s race this week as new allegations of groping two more women surfaced and the senator himself issued a new statement where he’s calling for a Senate investigation into his own behavior, which again means it will be covered up. They won’t expose their own for fear of being exposed themselves.

Now there is a growing list of women claiming Franken harassed them. Adding to the pressure on Mr. Franken was the announcement that two Minnesota state legislators, Democratic Farmer Labor Party (DFL) state Sen. Dan Schoen and GOP state Rep. Tony Cornish, plan to resign in the aftermath of sexual harassment allegations.

How the heck can Conyers and Franken survive?  The claims against them are from liberal women.  Time to resign and go back under the rocks they came out of, and if one resigns, every congressman who has committed sexual assault (that’s what this is) should also resign.  This is the reason they are circling the wagons, because they know the democrat party would lose way too many seats.

The Clintons set this tone in the 90s, by saying what they do in their personal lives don’t matter, just carry the liberal banner, but now we see the end results.  It’s time we sweep this part of the deviant swamp into oblivion.

And how do the taxpayers like it that Democratic representative John Conyers, the longest-serving member of Congress, settled a 2015 complaint from a former staffer who said she was fired after refusing his sexual advances. To make matters worse, the payout was the result of a secretive bureaucratic process Congress uses to handle harassment claims, and the money came out of Conyers’s taxpayer-funded office budget.  The New York Post reports that the federal Office of Compliance has paid more than $17.2 million for 264 settlements and awards to federal employees since 1997.

Apparently, this is just the tip of the iceberg of the total number of harassment incidents that have taken place on Capitol Hill.

Oh, don’t you just love this…special dispensations for our sexual perverts in Congress. They passed a law designed to protect themselves from such claims, and it prohibits their employees from having the same rights of redress as other federal employees and those in the private sector!

During the reign of Bill Clinton, Congress passed the Congressional Accountability Act (CAA) of 1995, and it was signed by Clinton.  Elizabeth K. Newman, an attorney with The Jeffrey Law Group, says it established “a terribly inefficient process and it takes forever,” in dealing with those allegations.  Newman’s Washington based law firm represents Congressional staffers subjected to sexual and other forms of harassment.

Newman says congressional staffers should have the same rights as other federal employees inasmuch as they should be allowed to file harassment claims with the Equal Employment Opportunity Commission (EEOC).  Unfortunately, they do not, and what they have to go through is a nightmare from hell as the victims.

Just who decided that sexual wrongdoing by these fools is not their responsibility but instead the taxpayers?  And where the hell are the Congresswomen who should be protecting female congressional staff employees?

Judge Jeanine Sums It Up

In the Judge’s 25 November 17 show, she said these predators are, “sleazy sexual perverts who claim the moral high ground based not on truth and justice, but on rank politics.”

Judge Pirro is right in asking why the American people pay the damages when these skunks are found guilty of sexual perversion, and suggests they need to repay us. We should take it out of their pay, sue them, or take it out of their pensions.  “No hardworking American should have to pay for the sexual immorality of these deviants.”  Listen carefully to her opening statements and solutions.

She is so right…if an elected official seeks to hide a settlement for sexual harassment by putting it in his operating budget and secretly paying the victim, the reimbursement to the taxpayers should be accompanied by a criminal investigation. Covering up payment to a complainant by saying a woman is working, when she is not, is a no-show job and conspiracy and fraud charges should be forthcoming…time these elitists pay the piper.

Her third recommendation involves the elimination of the forced confidentiality that protects the perpetrators as well as reforms to the system of resolution that treat the victim as if they were the offender and forces them to remain in the workplace where the abuse occurred as the 90-day-long process grinds on.  They are forced into counseling for 30 days, and then mediation for 30 days as if the victim is at fault rather than the perpetrator!  The lawmaker of course is not required to go to anything.

The Judge believes that the practice of allowing the lawmakers to forgo any of the remedial sessions that the victims are forced to attend is insane and that lawmakers should at a minimum be held to the same standards of public disclosure as offending priests.

Her final recommendation is, “If there is a finding of guilt of sexual misconduct, the official must be forced to resign their position.”

Americans who actually pay attention realize that we only have one party in Congress, and the two sides collude together to protect each other and grow rich off the American taxpayer.  Neither one of them is truly any better than the other, and none will risk outing the perverts because then they become the enemy of the good ole’ boys network.

We’ve seen this clearly with the efforts by Republicans, who are the majority in both houses, to delay or deny the promises they made during their recent elections.  These globalist insiders of both parties not only stick together, but collude to destroy the plans of America’s President.  Trump was chosen because grassroots Americans knew he wasn’t one of them.  He talks like us, he thinks like us, and he wants to really make America great again.

So, what do we do?  We pray without ceasing, we write and phone these buzzards daily, and come election time, we better get ourselves to the primaries and vote new blood into the system every single time there’s an election.  We don’t need term limits if we the people do our jobs and research the candidates and vote for and support the good guys.

Again, it falls on us.  Don’t leave it to chance, our descendants’ lives depend on us.