I think it is quite interesting that he is coming out to attack this President considering he was recently defending an actual oppressive regime.  He went to Cuba a few weeks ago and served as a mouthpiece for the oppressive Cuban government.  He is not criticizing the president because he is against oppression, he is criticizing the president because he has terrible poll numbers and he is, I think, looking for some attention. —Sarah Sanders on Jeff Flake’s Senate denouncement of the President

Oh yes, the bubble burst for the leftists when it was announced that our President is in astonishingly perfect mental and physical health, but they’ll cast aspersions on the physician, Rear Admiral Ronnie Jackson, who did Trump’s yearly physical.  The Obama lapdog delusionals are the only ones who believe their horse manure, but they’ll search out leftist “specialists” who will, without a personal examination, claim our president is mentally challenged with Alzheimer’s or dementia.  Total cowplop. 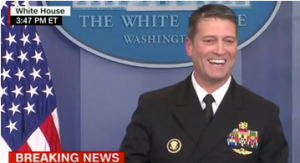 Yeah well commie media, you can’t get away with it.  Why?  Because Eric Trump, on a recent Fox and Friends, exposed how exhausted the media became while following his father around during the campaign. Our future President held three, and sometimes four rallies per day, and spoke to every audience for 60 to 90 minutes, then traveled to another rally.  Eric said he’d see the media slumped in their seats, exhausted, asleep, and his dad was still raring to go.

Yes, Trump is a Stable Genius

Because of all of the yammering idiocy of the Dems and their media sidekicks, the President actually requested a cognitive exam.  Dr. Jackson said he saw no indication that such a test was necessary, he stated a few guidelines were available and he agreed to administer one of the more lengthy, difficult and involved tests to President Trump which the President passed with flying colors.  Here is the video of Dr. Jackson answering questions from the media.

During the campaign, the Democrat candidate had fits of coughing, collapsed leaving the 9/11 memorial, took two weeks off before a debate with Donald Trump, and refused to campaign during the last month before the election, yet we never heard the media mention Hillary’s questionable health.

The questions to White House Press Secretary, Sarah Sanders from the assembled media were typical.  Here’s what they asked, “Can you assess the president’s mental fitness for office?” “Did you look into what the cause of the President slurring his words during an address?” “Are you ruling out early onset Alzheimer’s and dementia like symptoms?” “Do you keep a tally of how much golf the President plays and do you consider that exercise?” “Can you tell me how a guy who eats McDonalds and fried chicken and drinks diet cokes can be in as good a shape as you say he is?”

Well media, he doesn’t drink adult beverages, he’s never smoked, and he has the energy of a twenty-year-old, and he’s married to a beautiful and brilliant woman who is 24 years his junior, and that makes you so danged angry you can’t see the forest for the trees.  The man loves his work, he has boundless energy and it drives the left absolutely nuts. 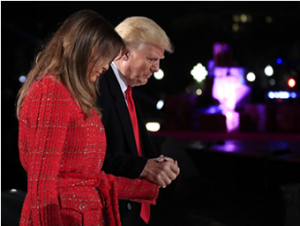 The lighting of the 2016 White House Christmas tree shows the love of this wonderful couple.

This man is so far ahead of all of the media, and that includes those on Fox News, that he’s got them tied in constant knots.  Why?  Because he’s playing chess, and these leftist dummies are playing checkers.

Trump is now calling Dick Durbin, Little Dicky, which I find all too humorous.  Durbin is the Senator from the 20th district of East St. Louis, Illinois and it is a slum, just like the slum Maxine Waters represents from California’s 43rd district.   Maybe we should call their districts “Sh**holes.” The fools in these districts vote this scum into office, hoping for more government giveaways to the electorate who have no desire to work or improve themselves.  Durbin lied about what the President said in their recent bi-partisan meeting.  He’s lied before, and now he’s admitting this lie. 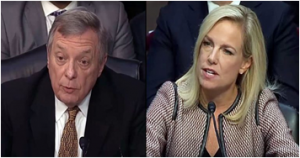 Kirstjen Nielsen, Director of Homeland Security, testified on 16 January 18 before the Senate Judiciary Committee on immigration. She was in the meeting where Durbin claims Trump used the derogatory term to describe countries. She was great. She told Patrick Leahy that she did not hear the President use the derogatory term, “Sh**hole.”

New Jersey Democrat Senator Cory Booker attacked Nielsen as though she were a slave trader.  Booker failed to maintain any decorum and screamed at Nielsen and his diatribe did not allow Nielsen to even respond.  She served only as the punching bag for globalist Democrat rants.

Apparently, there were profanities being tossed around in that meeting from all people on all sides of the issue. But the left is morally preening as though they are the essence of virtue and that they are spotlessly clean and that qualifies them to sit up on high, morally judging everybody else.  Yet, remember when former Vice President Joe Biden used the “F” word in public, and not just once, and the media said nothing?

Trump Tells Acosta to Get Out

President Trump had had enough of the disrespectful CNN yellow dog Dem cur, Jim Acosta, and ousted him from the oval office.  He should do the same with Acosta’s pal, April Ryan, as neither of these alleged journalists should have the privilege of even asking our President a question when they use such vulgar and contemptuous statements that gain them attention with their communist media associates.

In this instance, Trump was finishing up with a meeting in the White House with the President of Kazakhstan, when he was subjected to the undisciplined attacks of the rogue fake news propagandist.  A female voice thanked everyone, which is the cue that the media should excuse themselves.  However, Acosta refused the cue and started asking offensive questions. He said, “Mr. President, did you say you want more people to come in from Norway, is that true Mr. President?”

As Acosta continued his badgering Trump replied, “I want them to come in from everywhere, everywhere. Thank you everybody.” But that wasn’t enough for the blatantly disrespectful Acosta.

Pushing the race card, Acosta asked, “Just Caucasian or white countries, sir, or do you want people to come in from other parts of the world where there are people of color?”

The President had had enough of this low life liberal’s insolence and disrespect and pointing at the direction of Acosta and the door, President Trump said, “Out.” 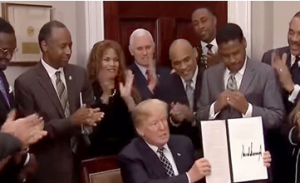 People in the media like April Ryan should not be permitted to attend important and solemn events where respect and decorum is a necessity.  Like her fellow fake news counterpart, Jim Acosta, she exhibited the same type of rude behavior.  Obviously, these people cannot be trusted to behave in a professional manner.

On 12 January 18, President Trump held an event in the White House honoring Dr. Martin Luther King, and was surrounded by a group of invited and prominent black guests, one of whom was close family friend, Lynne Patton who helped to run the Eric Trump Foundation, and now works for the U.S. Dept. of Housing and Urban Development overseeing New York and New Jersey.

As the President was concluding the event, April Ryan of CNN’s black Urban Radio Network disrupted the event with racist accusations.  Ryan shouted, “Mr. President, will you give an apology for the statement yesterday?” She was referring to his alleged use of profanity regarding “Sh**hole” nations, the leftist lie promoted by Democrats who attended the meeting.

She followed that moronic outburst by asking an insulting, “Mr. President, are you a racist?”

The President refused to dignify her loathsome outburst with a reply, but Pastor Darrell Scott, one of those in the signing ceremony, responded on the President’s behalf, shouting back at Ryan, “No, Absolutely not.” CNN hack Ryan responded to his answer, stating, “I’m talking to the President, not to you, sir.” Scott replied, “I’m talking to you.” This ill-mannered Bolshei continued with her crude and inappropriate questions.

Here is the one-minute video of that event

In the many decades that I have watched politics, I have never seen such disrespectful, abusive, ill-behaved and despicable treatment of the President of the United States. Men of lesser character and strength would have thrown in the towel long ago, but we have a President who is unlike typical globalist politicians.

Jesus said, “Behold, I send you forth as sheep in the midst of wolves: be ye therefore wise as serpents, and harmless as doves.”  Our 45th President is not only shrewd, but is far ahead of those he must deal with on a daily basis.  As I’ve said before, he plays chess, while the rest of them are playing checkers.

These crass and culturally ill-bred journalists need lessens in proper comportment, and if they can’t conduct themselves with appropriate decorum and civility, then they should be banned from the oval office.

Pray for our President, as he puts up with the rancor and venom of the socialist media, the democrats, and many in his very own party every single day.