Home/February 2021, Opinions/Don’t You Get It? America Is A Socialist Democrat Monarchy

Don’t You Get It? America Is A Socialist Democrat Monarchy

“We have allowed an unholy alliance of government – the new monarchy – and corporate influence – the new aristocracy – to take control of events in a way that would have made our Founders shudder.” —Marianne Williamson a contemporary American author, spiritual leader, political candidate, and activist

Founding Father and American President John Adams warned us 240 years ago when he said:  “I do not say that democracy has been more pernicious on the whole, and in the long run, than monarchy or aristocracy. Democracy has never been and never can be so durable as aristocracy or monarchy; but while it lasts, it is more bloody than either. … Remember, democracy never lasts long. It soon wastes, exhausts, and murders itself.  There never was a democracy yet that did not commit suicide.

That is why America was designed to be a Constitutional Republic, not a Democracy.  But the Democrats have turned America into a socialist Democracy that is murdering itself. 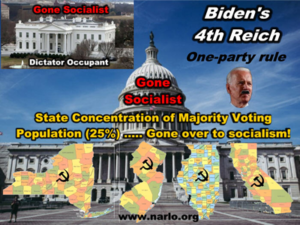 Conservatives must know by now that it is over.  By the time Biden finishes his first term in office, if he lasts that long, the damage he and the Democrats will inflict upon America’s culture, the economy, our energy, our sovereignty and our institutions will be irreversibly permanent.  There will be no way to undo it through the executive, legislative, bureaucratic, or judicial processes. As proof, conservatives have tried for 10 years to repeal Obama Care, passed when the Democrats controlled Congress and the White House, but have failed in every attempt.

Republicans, who should have seen this coming a long time ago, stood by and did virtually nothing other than to capitulate to the Democrats in increments over time until the merging of the two parties was complete.  Progressive corruption, collusion and racketeering forged the merging.  The Republican Party is now so fractured as to render it essentially impotent.  Disgustingly, ten members of the so-called conservative party voted to impeach former President Trump.

Because the American people are weak in character they only see the money and free government gifts, never the principles or the preservation of freedom.  Freedom requires self-reliance, independence, responsibility and strict adherence to the Constitution.  Government largess for the purpose of buying votes is the antithesis of freedom and the Constitution.  Nevertheless, weak American character is why the Democrats have been so effective in buying off the electorate with money from the Public Treasury and benefits from the legislative branch.  That is exactly what they are doing now.

Why do you suppose that the Democrats are obsessively set on passing the $1.9 Trillion dollar stimulus package that offers $1,400 in free cash to millions of Americans, without Republican support?  Why are Democrats offering to reduce all student loan debt by $50,000?   Why does that same stimulus package include $350 billion dollars for their Democrat friends in states like New York, New Jersey, Illinois and California who can’t seem to balance their budgets because of their socialist policies?  Why do Democrats want to open our borders to illegal aliens and promise them not only free health care but amnesty as well?

The answer is simple.  Every one of their payments to or benefits for the American people is designed to buy votes so as to keep the Democrats in power in perpetuity while closing the door permanently to conservative candidates and conservative ideology.

Then there is the issue of government control of the masses.  Why does our current government under Joe Biden want to “kill” fossil fuels?  Why did Biden cancel the permit to the Keystone XL pipeline that was already under construction with contracts let, materials purchased and labor hired?  The financial and job losses are staggering. There are tens of thousands of miles of natural gas, crude oil and refined petro-chemical products being transported by pipelines all over the U. S. Why just cancel the permit to the Keystone XL pipeline?  Why not stop the pipeline flow entirely if killing fossil fuels is the goal?

Why did Biden, with a stroke of his pen, freeze all leases for mineral and fossil fuel extraction on federal lands when he promised on several occasions that he would not ban fracking?  He just did!

Why have Democrats joined the radical cult of environmentalism and man-caused global warming where environmental law and an erroneous atmospheric condition repeal constitutional property rights throughout the land and impose massive regressive taxes on the general population?

Why has Biden re-joined the Paris Climate Accord, which will rob trillions of American taxpayer dollars to fund, when the net reduction in temperature, if the Paris Accord is successful by the year 2100, would be around 1.5 degrees Celsius.  And the whole scheme is based on unreliable computer models.  Meanwhile, China and India are free to emit CO2 as much as they want while Americans must sacrifice on a trumped up climate theory that doesn’t meet logic, reason, science, or the smell test. (See: “Climate”)

Why are Democrats constantly throwing race into our faces and accusing the White population of being terrorists, insurrectionists, White Supremacists and a privileged class?  Why are they inserting the racist-laced critical race theory into our schools, government bureaucracies and businesses?  The first reason is to divide us by playing the races against each other.  The second reason is to ingratiate Democrats with blacks and Latinos and cement their vote in perpetuity.

Why are Democrats so intent upon becoming part of the global world?  Why does globalism have a higher priority than American interests, American sovereignty, American freedom and the American people?

Once again, the answer is simple.  Democrats believe in total government control with Democrats in permanent possession and control of the steering wheel.  The “Consent of the Governed” to them is an oxymoron.  The Constitution is an impediment to their dictatorial rule.  Individual freedom, unalienable rights and free choice to Democrats are inferior to the rights of the collective, the group, the association ….. the government!  See how the Democrat collectivist beliefs parallel Hitler’s statements about the infallibility and priority of the state:

“I will tolerate no opposition. We recognise only subordination – authority downwards and responsibility upwards.”

“Brutality is respected.  Brutality and physical strength.  The plain man in the street respects nothing but brutal strength and ruthlessness.  Women too, for that matter, women and children.  The people need wholesome fear.  They want to fear something.  They want someone to frighten them and make them shudderingly submissive.”

“Each activity and each need of the individual will be regulated by the party as the representative of the general good.  There will be no licence, no free space in which the individual belongs to himself.  The decisive factor is that the State, through the Party, is supreme.”

To Democrats, the Declaration of Independence is the work of terrorists and is a document of insurrection against the state.   In fact, the U. S. Congress passed a law, Title 18 USC Section 2385, that prohibits and outlaws speaking or writing about, advocating, or overthrowing the government.

Hitler had Joseph Goebbels, his Propaganda Minister.  The Democrats have their propaganda minister in the form of the 4th Estate, commonly referred to as the Mainstream Media.  But the Democrats also have a third and fourth propaganda minister in the form of social media and academia.  Joseph Goebbels said, “think of the press as a great keyboard on which the government can play.”  The Democrats are having a high old time playing their favorite socialist tunes and uttering lies and Democrat propaganda on America’s Mainstream Media while getting social media to scrub any conservative ideas or policies in what is now called the “cancel culture.”

This is the ruling class we have elected to run our lives.  So who are the stupid ones, the ruling class or the voters?  The answer is abundantly obvious.  What have the Republicans done to stop the onslaught of a 100-year Progressive take over of the American government and all of its institutions?  Nothing!  In fact, in many cases, Republicans have aided and abetted the take over.  Representative government is essentially dead.

Back in 2014 we wrote an article entitled, “Just How Are You Going To Unravel This Banana Republic.”  In it we describe actual stories of individuals who have fallen afoul of a government gone mad with regulations and taxes, just as they are now.

Later, we penned another relevant article entitled, “Just How Are You Going To Reverse Engineer History.”   In the article we wrote, “How can we turn back the clock to a time when Americans were self-reliant instead of dependent?  How do we return to a time when we took responsibility for our actions instead of being excused for them because we have become victims of society’s ills?  What makes us think we can re-invent the past when the rule of law meant something, or when there were individuals with individual rights?  Why did we let America morph into a collective where only the collective has rights?

In 2019 we wrote a follow up article to the above two articles entitled, “Demographics Will Eventually Destroy Our Founding Fathers Republic.”  In this article we wrote, “Sadly, we are no longer Americans for America and freedom’s sake.  The vast majority of Americans have become non-thinking members of a constituency-voting block, voting or lobbying for things they can get FROM government for free, (at taxpayer expense) or protesting against government for things that government is proposing to take away.  Politicians have become nothing more than snake oil salesmen selling their soul for your vote by promising to give you something that isn’t theirs to give so that they can remain in power.”

“The only conclusion that one can come to is that either a man-made (civil war or revolution) or natural disaster has any chance of stopping this demographic avalanche from happening. The only other possibility is by some feat of magic a minority (freedom-loving Americans) can somehow convince the socialist majority that they are unknowingly headed down a path towards destruction, national oblivion and enslavement.”

It all boils down to the fact that America has morphed into a Socialist Democrat Monarchy and there is no peaceful way to reverse the path towards cultural, economic, financial, energy, national sovereignty and individual freedom annihilation.

We find no joy in reporting our irrefutable observations.  Sadly, most Americans, except those over 70, just don’t get it or refuse to accept it.  At least 100 years ago America ceased being a Constitutional Republic and became a socialist Democrat aristocracy under the relentless onslaught of the hopelessly corrupt and politically flawed Progressive movement, a movement spawned by socialists and communists in the late 1800’s.  And one more thing, as the socialist Democrats squeeze the conservative population even more, incidents like what happened at the Capitol on January 6th 2021 will become more prevalent.  Eventually, these smaller incidents of insurrection will lead America into a state of civil war.

Do you believe that former President Trump should receive the Medal of Freedom for his many accomplishments for America and the American people?  If you do, click HERE.