The toughest thing for any writer to do is announce the departure of a best friend. A best friend is closer than a brother even though both are gifts from God and both bonds are strong. But one does have a bit more latitude with a best friend than could take place with a brother or sister. Think about it.

I first met Dennis Guinta in a church I was affiliated with. The first time we saw each other in the aisle of the sanctuary, something clicked. We immediately launched into a lively conversation that was not about to end fast. We had strong ties in common; a fierce love for animals, a total commitment to God…and to our wives. Plus we both had an explosive sense of humor. Sometimes we would get so tickled in a restaurant that other diners wanted to come and join us.

The attached photo shows the two of us outside an animal shelter in Martinez, California, where a crowd had gathered to stop the euthanasian (putting to death) of unwanted dogs or cats. Most shelters keep them for only a couple of days and if nobody comes to claim them or adopt them, they are put down. Basically to get them out of the way. Both Dennis and I spoke at that gathering and apparently changed some minds.

Dennis had such a genuine concern for animals that he read of a Pitbull that was scheduled to be executed in New Mexico. Not because she had bitten someone or tried to. It was simply because she was a Pitbull. He got on the phone immediately, told them not to do anything to the dog because he was going to take off immediately to go there and adopt the dog. And he meant business. They could tell by his commanding voice that he did.

He jumped into his car and drove from Brentwood, California to a town in New Mexico to rescue that dog, that he named, “Maggie,” and then immediately came back with her. Maggie turned out to be a very loving dog. 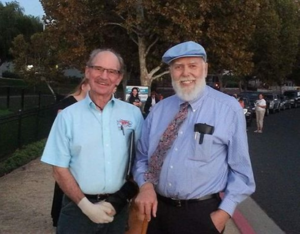 Dennis and I were always together or on the phone. We went to library sales and came home with a load of books that were bargain priced, which didn’t make our wives too happy. He felt the call to go into ministry so I trained him in my chaplain class. This meant that he had to be available to me 24 hours a day since he was required to go with me on emergency chaplain calls, many in the middle of the night. The first time he ever saw a person die was during that training along with the removal of the body. He also took part in the funeral I did for the woman involved.

He graduated and I ordained him as a chaplain of Drag Racers. I had been in show business when called to the ministry, so after training and additional classes I became a chaplain and was ordained as “Chaplain to Show business.” Made sense since both of us had a unique understanding of those areas.

Dennis ministered to racers on the tracks and in the case of illness, in their homes. He would pray with racers in their cars before a contest. He also put himself out there to be available to anyone who needed him. Such happened to me during the worst time of my entire life.

My beloved lab, Rusty died of a heart attack in my back yard. He was 11 years old. I knew it was coming and had my arms around him during the entire process telling him how much I loved him. He died in my arms. I had rescued him from the pound when he was a little pup with long legs and we had bonded fully over the years.

I immediately called Dennis. He rushed right over, used his van to drive us all to the pet hospital where they would cremate him and give us the ashes that we will always have with us. What’s more, Dennis paid for everything. He knew that we were not flush with money in those days. Also he knew exactly what to say, telling me about Rusty running through a field after crossing the Rainbow Bridge and waiting for me. And yes, I do believe that dogs go to heaven and wrote a book about it titled: “God and Animals-What the Bible says about Animals and Heaven” published by Amazon.

Then on the very same day the next week, our cat, who was raised with Rusty and the same color as him, died. They virtually grew up together. The cat died of grief. Dennis also paid that bill.

We were on the phone everyday discussing and almost cussing about the political antics of the day. Since he was 20 years younger than I, he would be reminded that he was ‘just a kid.’

When my dear wife was hit with cancer, Dennis insisted upon driving us back and forth to Stanford University Hospital which is not an easy drive. My own health was deteriorating and he would not have me drive that distance. This back and forth was almost every day. When Shirley had the surgery, Dennis stayed all night with me at the hospital. Just his presence was strengthening to me. He also drove me to my preaching and speaking engagements all over the Bay Area.

Also, being civic minded, Dennis never missed the opportunity during a news interview to discourage young people from racing on the streets but to leave that activity to the professionals.

When we moved from California to another state, Dennis was right there to help, and even drove one of the furniture trucks and helped us move in. Once again, his presence was very much valued during this move as well as soothing since any change in one’s life is a little scary. At least for me.

Yes, a best friend is far more valuable than rubies, jewels, heavy bank accounts or recognition. (A nod to Proverbs 31:10) I treasure every moment I had with Dennis and Sara his wife. Every encounter with them was pure joy. Life will not be the same for me after his passing. I’m sure that when my time comes, Dennis will be there to greet me and say out of the side of his mouth, “So what took ya so long?”

This is going to take some time to get over. At this moment tears are dropping down on my keyboard as I write this. But I have enough good memories of my very dear friend to last me for the rest of my life. And when I make that crossing myself and am reunited with him , it will not be thunder you are hearing, but laughter from heaven. In the meantime, dear friend, stop trying to race the angels.

Austin Miles’ Popular Book, God and Animals, what the Bible Says About Animals and Heaven is available on AMAZON