We knew that Donald Trump was given 77 million votes. That could not be hidden. Yet the Communist Democrats strained to convince us that this count wasn’t true. We heard stories of stacks of hundreds of ballots voting for Trump being tossed into rivers, and buried. We had proof of dead people voting. The grave yards were never livelier.

There were too many eye witness accounts in too many locations to fluff this off. Seventy Seven Million ballots voting for Trump simply tossed aside so that socialist Joe Biden could take control of America for the Communist Party. That has been the goal of the reds for over 60 years.

This “election” was totally tampered with in order to put America under socialist communist control. The lying news media did everything possible to unseat Donald Trump, even though he did everything he said he would do as president. No president was able to accomplish that during their tenure. Trump did.

When complaints about the election irregularities began to arise, the lying news media used words like “unsubstantiated claims,” and “faulty reports” in order to hide what had really taken place.

And the first thing Biden did as he slid into the Oval Office was to stop a company, in the middle of their project, costing 11,000 American jobs. That was right out of the gate. He has continued to sabotage our independence so as to be totally dependent on the Communist Government to meet their needs, or the needs the government determines one has.

This was a Communist coup d’etat that had been in the works for decades. Now to answer the typical reactions to election fraud, which it 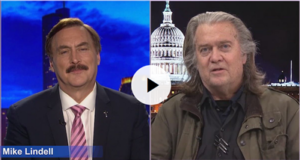 was, you will hear from eye witnesses to the various election frauds that took place. It was not an individual, but a group effort. You must take the time to listen to this and you will be astonished at what has taken place right under your eyes. As the Chinese Philosopher Sun Tzu stated, we must learn everything about our enemy.

In this case, experts reveal the cyber attack on our country. We must and CAN turn this around so that this can never again happen in our country again. Mike Lindell, the pillow man is a fierce patriot and gathered information that absolutely cannot be denied.

So here is everything you wanted to know about this last election but were afraid to ask. Click on this link for all our sakes: And fellow countrymen, here is ABOLUTE TRUTH about what really happened in the 2020 election.