The 1928 Republican Convention opened with a prayer. If the Lord can see His way clear to bless the Republican Party the way it’s been carrying on, then the rest of us ought to get it without even asking. —Will Rogers

McConnell’s the Senate Republican leader, but he refuses to lead on defunding Obamacare. What good is a leader like that? —Matt Bevin

The Republican Party’s typical position is to preemptively surrender whenever liberals start yelling ‘Oh that’s mean. You can’t use that word’: ‘Oh I did not realize that ‘The New York Times’ made a finding that the term ‘anchor baby’ is offensive. Henceforth I shall not use it.’ —Ann Coulter

If you believe the Republican held Senate will help President Trump stop the leftist onslaught from Speaker Pelosi’s Democrat held House, dream on.

The Neo-Cons and Kingmakers

A majority of Republicans front for America’s enemies.  Why?  Because 90 to 95 percent of them belong to the same globalist cabal as the Democrat party socialists.

Buckley advocated the legalization of marijuana, approved the Panama Canal giveaway, repeatedly called for national service for youth, smeared Pat Buchanan, pushed for foreign aid giveaways to Russia, favored legalized prostitution, supported adoption of the Brady Bill gun control measure, and endorsed “gay rights” legislation.  Seems as though if you have built a reputation as a conservative, you can get away with being as liberal as you want.

Journalist Irving Kristol published the magazine, Encounter, which received covert funding from the Central Intelligence Agency after the CIA and MI6 discussed the founding of an “Anglo-American left-of-center publication.

Phyllis Schlafly understood the destruction only too well when she wrote A Choice Not an Echo regarding the Rockefeller “Kingmakers.”

Like John Birch Society’s President Emeritus, John McManus, Schlafly accused “the secret kingmakers” of the Republican party of constantly undermining conservative champions like Robert Taft and Barry Goldwater and using back-door deals to ensure the victory of compromising candidates like Wendell Willkie and Dwight Eisenhower.  Neo-cons Buckley and Kristol along with the Rockefeller Republicans have stabbed us in the back. 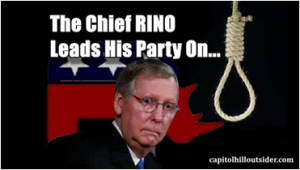 Regarding the southern border wall funding, Senate Majority Leader Mitch McConnell has already refused to use the nuclear option where a simple majority is enough, rather than the required 60 votes.  Senate Majority Leader McConnell and his wife, Transportation Secretary Elaine Chao make millions through Chao’s father who owns a Chinese shipping company, so McConnell has no desire to help Trump in any fashion.

Republican Sens. Jeff Flake (AZ) and Lamar Alexander (TN) immediately announced that they would not vote for the nuclear option.  Both are Trotskyites (slow Marxists). Link  Alexander is retiring, but his good friend, our corrupt Tennessee Republican Governor Bill Haslam, who refused to vote for Trump, will run for Alexander’s spot and retain it for dozens of years, once again giving no support to old right conservatives.

Harry Reid certainly had no trouble using the Nuclear Option in 2013 to fill district courts with Obama’s nominees, those same judges who now stop every executive order by President Trump to protect American citizens from invaders.

Transnational criminal gangs pose an immediate clear and present danger to the security of the homeland and its communities. Gangs are involved in a myriad of criminal activity, including murder, extortion, narcotics and weapons trafficking, human smuggling/trafficking and prostitution and other crimes with a nexus to the border.

The government spends $5.9 billion per month on food stamps.  Four and a quarter months of food stamp expenditures would pay the entire $25 billion for the Mexican border wall.  Why is this not in the budget?  Because the false friends on the right will not support our President and the protection of the American citizenry.

Thanks to socialist judges, officials with the Immigration and Customs Enforcement Agency released nearly 1600 migrants in downtown El Paso over the 2018 Christmas holiday.

Talk show host, Tucker Carlson has attacked President Trump for failing to build the wall, failing to defund Planned Parenthood and failing to rid us of Obamacare.  Carlson does not understand the Constitution, that it is up to Congress not the President to make these changes, but Congress is fighting our President at every turn.

Yeah well Tucker, have you ever talked about Sen. Ted Stevens of Alaska?  He was a decorated WWII hero…and beloved in the State of Alaska.  Falsely charged by the Public Integrity Section of the Department of Justice (DOJ), he lost his seat in a narrow margin to a democrat.  Sen. Stevens would have voted against Obamacare and we would have been spared because of his vote.  Robert Mueller was the FBI Director at the time, and Nicholas Marsh, the prosecutor in the Ted Stevens case committed suicide.

Back in 2015, the Senate voted to repeal Obamacare knowing full well Obama would veto it, but then they could lie to their constituents again and say, “Well we tried, we all voted to get rid of it.”  What a sham.

Senators Murkowski and McCain saved Obamacare just months after campaigning and promising their constituents they’d repeal it.  McCain’s 2016 campaign ads said “Obamacare is failing Arizonans,” and that “John McCain is leading the fight to stop Obamacare.”  McCain even introduced a bill to “fully” repeal Obamacare and replace it with a “free-market approach” that strengthens the quality and accessibility of care.  Yet he voted against it.

Murkowski wrote op-eds against the Affordable Care Act, vowed to repeal it, screamed about what it had done to her home state of Alaska and then turned around and voted against every single version of Obamacare repeal. She even voted against a “skinny” repeal that would have only ditched the law’s individual and employer mandates and suspended the tax on medical devices — a tax that is so harmful to that industry that even uber-liberal Sen. Elizabeth Warren wants it repealed.

And those death panels…they really do exist.

Ryan disavowed himself from ever supporting President Trump after he heard the Billy Bush/Access Hollywood tape during the 2016 campaign, which was the excuse for this left leaning globalist to sabotage his own party’s candidate.  Ryan said, “There are basically two things that I want to make really clear as your Speaker.  I am not going to defend Donald Trump, not now, not in the future.” 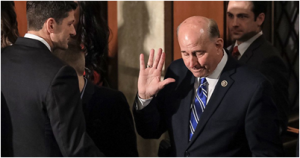 Paul Ryan was allegedly linked to the release of that tape in an effort to destroy Trump’s campaign.  Gateway Pundit revealed that Ryan actually allowed the corrupt FBI, DOJ and Mueller investigation to harass President Trump since before his inauguration.

Congressman Louie Gohmert revealed that Ryan encouraged GOP House members to campaign against President Trump in 2016.  Watch this 90 second video with Congressman Gohmert.  Now we find out that Ryan and his Chief of Staff John Burks were both involved in pushing the fake Russia Fusion dossier.

In 2016, Trump’s running mate, Mike Pence disagreed with Trump and endorsed Paul Ryan prior to Trump endorsing Ryan and McCain.  Not surprising for an establishment insider like Pence who spent 12 years in Congress voting for everything candidate Trump was against.

Pro-amnesty Ryan has never been in lockstep with conservative Republicans. Ryan’s June 2018 amnesty bill, the largest in 30 years, thankfully went down in flames. Ryan has fought the President tooth and nail regarding the porous southern border and illegal aliens.

Senator Schumer praised Ryan for giving President Obama everything he wanted, including promoting a $1.1 trillion omnibus bill. Ryan was far worse than John Boehner and his 20 years in Congress were spent betraying conservatives and America in general.

When over 44 House Republicans, including Ryan, announced their retirement prior to the 2018 midterm elections, the Speaker did nothing to convince the members to remain in Congress to help President Trump and the party.

Retiring Reps Goodlatte and Gowdy say crooked Mueller’s report on Trump “must be trusted.”  Both of these men have claimed Mueller is an honorable man, but history tells us differently.  Mueller’s modus operandi has been exposed numerous times by Congressman Louie Gohmert and by Louisiana State Senator John Milkovich in his book, Robert Mueller, Errand Boy for the New World Order.

More leftist Republicans are now in the Senate.  Romney has replaced GOP Senator Orrin Hatch and he represents the Rockefeller wing of the Republican Party.

As I stated in a previous article, whoever is advising and vetting the President’s choices is not on the side of freedom and the Constitution.  Swamp creatures seem to surround our President.  As for Romney, he will fight Trump at every turn, just like Paul Ryan and Mitch McConnell.

President Trump has few friends in Congress.  The House Republicans were responsible for overseeing the FBI and DOJ, but they failed.  They unceremoniously ended their investigation into the way the FBI and the Department of Justice handled Hillary Clinton’s email scandal and the biased allegations against President Trump.

The next two years will be a nightmare from hell.  The 2019 House will be run by the socialist Democrats with Nancy Pelosi at the helm until at least 2020.  The Republican Senate will not stop the Democrat efforts to destroy our President and his campaign promises.  The Senate is just as filthy as the House.  Both are led by left of center haters of our representative Republic.  They have no desire to help Americans or our President.

Kimberley Strassel’s latest article, The Trump ‘Ethic’ Resistance exposes that House Democrats are about to blitz the Trump administration with subpoenas and investigations. Dark money will fund the effort to destroy Trump.

A local friend said to me, “Honey, here’s the truth of the matter. The majority of Republicans, like their Democrat buddies, are slimy pinko commie sumbitches eagerly tearing apart the very fabric of our once great nation.”  I believe he’s right.

Time to call a halt to this corruption.

P.S. We are starting a brand-new year.  NewsWithViews is funded by your donations.  Our CEO counts on those donations to run the website and keep articles coming into your email every day.  None of the research journalists are paid, they write exposes for the love of country and to expose the evil we are fighting.  Please add NewsWithViews to your monthly budget.  Every dollar keeps this website operating. You can donate here.