Fauci Isn’t the Only Sadistic Bastard

WARNING:  Photos are horrible but the truth must be told and seen

Back on August 16, 2021, I pointed out in my column:  “There is NO need to abuse animals and subject them to extreme pain and cruelty to sell products (like spraying hair spray into the eyes of a bunny rabbit to see how the poor thing will react) and certainly not this but then again, I see Doctor Death as having no soul:  Anthony Fauci Approved the Systematic Torture of Dogs (8.5.21)  –  $424,000 of our tax dollars.  Beagles were tortured and endured months of horrible pain and then killed.” 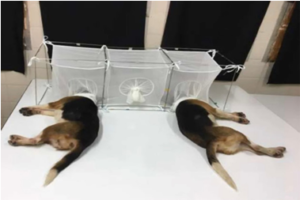 Don’t know why it took so long, but over the past few days, suddenly, it’s all over the Internet.  Fauci under fire by beagle organization over alleged puppy experiments, October 27, 2021

“A bombshell report from the watchdog group White Coat Waste Project claimed that the agency spent $1.68 million in taxpayer funds on drug tests on 44 beagle puppies.“ Keith slammed the experiments, which allegedly also involve locking the dogs in cages with hungry sand flies so that the insects could eat them alive, as “unethical.” “Dr. Fauci, the evidence is clear: animal testing is outdated, flawed, cruel, unethical and harmful to both animals and humans,” she said.

When I first saw the beagle photos two months ago, I damn near, well, you can imagine.  Such barbaric experimentation using our tax dollars was hidden by doing the experiments over in Tunisia.   Further from White Coat Waster Project: “Bearing witness to what you and your organization does to these animals is nothing short of criminal. It is time to end it, and now the world is watching,” president and founder Shannon Keith wrote.

“If it does not end immediately, Beagle Freedom Project will make sure it becomes criminal and those who perpetrate it will be punished by law.”  She cited the FDA Modernization Act, a bipartisan bill that was introduced to end an outdated mandate that experimental drugs must be tested on animals.”

That bill, H.R. 2565 has been introduced session after session; Congress refuses to pass it.  As of today, the bill has all of 12 co-sponsors.  My congressman, Jodey Arrington is not one of them.  Arrington is very popular in this district but apparently torturing and killing innocent animals doesn’t seem to bother him.  But, that bill is watered down diarrhea.  “Allows an applicant” to stop torturing helpless animals? It should read:  Effective this date ALL animal testing will cease as other ethical and effective biology- based methods are available.

“This bill allows an applicant for market approval for a new drug to use methods other than animal testing to establish the drug’s safety and effectiveness. Under this bill, these alternative methods may include cell-based assays, organ chips and microphysiological systems, sophisticated computer modeling, and other human biology-based test methods.”

NIH (National Institutes of Health) is under HHS (Dept. of Health Human Services) headed up by another sociopath, Xavier Becerra [D].  The buck for spending stops at his desk.  $3 MILLION of our tax dollars went to fund heinous experiments at the University of Wisconsin-Madison where cats were drilled into their heads, deafened and then killed.

Fauci isn’t the only sadistic sanguivorous cretin receiving funding from your wallet.  This photo is USDA (Dept of Agriculture).

I am not anti-meat, foul or pork.  I eat meat, chicken and turkey. But, there is NO excuse for outright cruelty when it comes to slaughtering animals.  It’s not necessary to put pregnant pigs in gestation crates for months and months where they can’t move at all.  It’s not even against the law to simply burn them alive once their bodies wear out and can’t produce any new piglets.  The American people have no idea the horrors going on at big farming operations.

It would take pages and pages to describe how cows, chickens and other farm animals are tortured by big corporations while state legislatures look the other way.  What I don’t understand is how can their employees even look in the mirror every morning? Yeah, I can.  Sociopaths have no empathy for anyone, including animals.  Only for themselves. 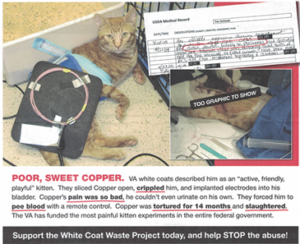 Rise for Animals is another group who simply want to see totally unnecessary torture of dogs “for science” stopped.

“Marshall BioResources breeds tens of thousands of dogs for the sole purpose of being sold as research subjects.  Dogs are born into a life of cold cages, treated like disposable commodities… Just recently mixed hounds bought from Marshall were used in experiments that can only be described as medieval.  Temple University researchers cut the spinal roots of these dogs, sliced off their tails and implanted electrodes on their bladders.  Sometimes their bladders were then cut from their abdomens before they were euthanized.”  Sociopaths masquerading as researchers.

“Marshall BioResources ships the dogs, cats, ferrets, and other animals they breed to research laboratories for unimaginably cruel experiments. Petco purchases and sells Marshall ferrets and products, directly supporting this cruel business. You can help shut it down.”

And Anthony Fauci’s NIH gives more than $15 BILLION dollars in grants every year for this monstrous industry with a large portion going to Marshall BioResources.  THIS is what you work so hard for to see your paycheck raided to pay for the deliberate torture of helpless animals.

NAVS (Advancing Science Without Harming Animals) is another hard working, dedicated organization trying to stop such evil.  August 27,2021 newsletter:  “Another Beagle bred to be tortured.  Her life spent in a cramped cage for all but 3 hours a week and what do they feed that innocent little doggie?  Pesticides to see how long it takes for her energy to fade away and kill her.

Physicians Committee for Responsible Medicine is a wonderful organization that educates Americans that using animals for science is NO LONGER NECESSARY (if it ever was), explains why and alternatives.  The one section they get an F on is COVID, but then with all the censorship hiding the truth, I’m not surprised.

But don’t throw the baby out with the bath water.  Want to fight hot flashes?  No need to torture helpless animals for more pills, there’s a better solution.  I highly encourage you to visit their site and read the truth about ethical science vs torturing animals.

Where does the blame for this go to?  Congress has oversight committees for USDA, NIH, VA & HHS.  They know this barbaric, monstrous torturing of innocent animals is going on and they approve of it because they fund it.  The bill above is toothless.  Those thieves in Congress continue to spend BILLIONS torturing animals for research.  Is this okay with you?

Tell your congress critter and senator:  We demand ALL animal testing at any U.S. government labs stop now – including farming out the research to foreign countries where they torture the dogs.  Not another BORROWED dollar to any labs who use animals for research because there are better alternatives.  Not another BORROWED dollar to any college or university who use animals for research for the same reason:  There are better scientific based alternatives to benefit mankind.

The same goes for your state rep and senator.  Tell he/she the same thing.  Not one more nickel to any labs, colleges or universities who torture animals for research.  I signed the petition to our state AG Ken Paxton to clamp down those who commit grotesque animal cruelty. Throw them in jail and send a clear message.

I have donated to the Beagle Freedom Project. They rescue those precious little muggers after being released from animal testing and research facilities. Just heart breaking. “Most were puppies when the torture began and had never even stepped on grass their whole miserable lives. BFP gives them rehabilitation and a safe and nurturing environment while they find new forever owners who will love and take care of them.”

The Kindness Ranch in Wyoming is also an animal sanctuary that rescues dogs and cats who’ve survived unimaginable torture while being experimented on by labs and universities – paid for by your state and/or federal income taxes.

The U.S. government is still allowing animal cruelty testing. The VA is one of the dirtiest culprits. It is NOT necessary to improve the lives of humans. E.P.A. Says It Will Drastically Reduce Animal Testing. Prove it.  No, it is not necessary to “safeguard human health”. Propaganda pure and simple. The same goes for the rotten, corrupt FDA (Federal Death Administration). It needs to stop, period.

And, don’t let me forget about cosmetics – a multi-billion dollar a year industry.  I covered this last Christmas:  That fur on your coat, ski parka and sweaters likely comes from dogs skinned alive by demonic sub-humans in China.  It’s just business they say.  The fur is routed through other countries to get around laws banning it like the U.S.

A long, long time ago I quit using any brand of make-up in any form that practices animal cruelty. Like spraying hair spray into the eyes of a bunny rabbit to see how it will react. I don’t want any product on my face, body or eyelashes that comes at the cost of torturing a defenseless animal.

Now, just because a cosmetic company says they are cruelty free does NOT mean they are because a little-known fact: If that company sells to the God-less communists in China they MUST use animals to test. China requires companies to torture animals to sell their products in their country.  That’s right and that’s why I use all-natural fruit-pigmented make-up from foundation to blush to mascara to eye shadow; silicone free.  All products. Dreamy!

Look, I know we have big serious issues killing this country:  Illegals invasion, vote fraud and the COVID-19 injections killing fields.  But, like hurting innocent babies, this torturing of animals is demonic.  There’s no reason for it when alternatives are being used with better results due to modern science.

I could have added a hundred more photos that would break your heart, but I hope you will make your voice heard on this and if you’re running for city council, county commissioner, your state legislature or Congress, make a promise you will work to stop such unnecessary and horribly cruel torture on helpless creatures.

Always hit them where it hurts the most:  $$

Cruelty-Cutter is cruelty-free shopping made simple! Cast away any doubts when purchasing items by using Cruelty-Cutter to scan an item and have an immediate response about its animal testing status.