“The FBI does not make any judgment about the credibility or significance of any allegation. The purpose of a background investigation is to determine whether the nominee could pose a risk to the national security of the United States. The allegation does not involve any potential federal crime. The FBI’s role in such matters is to provide information for the use of the decision makers.” – FBI Statement

Former, First Lady, U.S. Senator, Secretary of State, and losing presidential candidate Hillary Clinton spoke about the allegations leveled against Judge Brett Kavanaugh when it appeared he would be confirmed by GOP senators and a couple of “Blue Dog Democrats.”

On Tuesday night, Clinton told MSNBC host Rachel Maddow that she believes the FBI should conduct a full investigation. She said the accuser Dr. Christine Blasey Ford, a Democratic Party activist and college professor, is entitled to have her 35-year-old case treated as a crime.

“As someone who has watched this process unfold over many years, there does have to be some direction given to the FBI to pursue an investigation,” Clinton said. 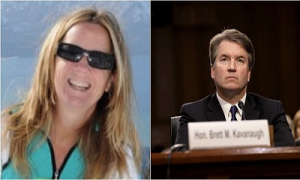 Clinton told Maddow that the investigation shouldn’t take a long time to conduct.  “I don’t think it would be a lengthy investigation,” she continued. “I think it could be done in an expeditious manner if they’re still trying to have a vote on this nominee, they could postpone for two weeks.”

But several law enforcement sex assault-investigators said this case is a waste since Prof. Ford doesn’t remember where the “crime” occurred, what the exact time and date was when she was assaulted, were there any witnesses, where did she go after the alleged sexual assault. 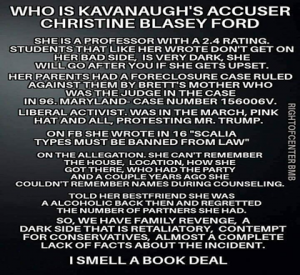 doesn’t answer the key investigatory components: who, what, where, when, how and why? This is the Democrats playing games with people’s lives — mean spirited, character assassination,” said former New York State Housing police commander Geoffrey Garlanti.

Clinton further said there could be an appearance of insult to Ford if an investigation is not done.

“Prof. Ford will be insulted? Is Clinton still having her dizzy-spells? What about Judge Kavanaugh? The man’s record is one of achievement, maturity and brilliance. He’s far superior to the Democratic Bozos who are judging him based on the word of a Deep State operative from Palo Alto University in the heart of the People’s Republic of California,” Det. Aquino quipped.

A Justice Department spokesperson has already released a statement saying the FBI will not be conducting an investigation into Ford’s allegations because they do not involve a federal crime:

“The FBI does not make any judgment about the credibility or significance of any allegation. The purpose of a background investigation is to determine whether the nominee could pose a risk to the national security of the United States. The allegation does not involve any potential federal crime. The FBI’s role in such matters is to provide information for the use of the decision makers.”

Before the allegations of sexual misconduct surfaced against Kavanaugh, Clinton had already expressed he was too dangerous for women’s rights and working-class people. She urged her Twitter followers to call their senators to oppose his nomination.

“Sure, he’s too dangerous? Hillary has blood on her hands, smeared women as nuts and sluts, and stole millions of taxpayer dollars, but Kavanaugh is the one who is dangerous,” said Mike Baker, a former cop and political strategist.