FBI Rotten From The Top Down, First Comey, Now McCabe

Republics are created by the virtue, public spirit, and intelligence of the citizens. They fall when the wise are banished from the public councils because they dare to be honest, and the profligate are rewarded because they flatter the people in order to betray them. Joseph Story, former Justice of the Supreme Court

Comey’s understudy, Democrat Andrew McCabe, now the acting FBI Director, is facing three federal inquiries for (1) sexual discrimination and subsequent retaliation against the complainant, (General Michael T. Flynn) (2) campaigning as an FBI official for his wife, which is a violation of the Hatch Act, and (3) ethics violations relating to campaign payments to his wife.

Let’s take a look at these charges one by one.  John Solomon and Sarah Carter of Circa, exposed McCabe’s retaliation against General Michael T. Flynn.

Robin Gritz who is a decorated counterterrorism agent, had filed a sexual discrimination and retaliation lawsuit against Andrew McCabe and other top FBI officials.  Once she filed the lawsuit, McCabe began investigating Gritz personally looking for any dirt on her he could find.

Unfortunately, it takes a good deal of time for the lawsuit to work its way through the U.S. Equal Employment Opportunity Commission and is still waiting for review by an administrative law judge in the Office of Federal Operations.

In 2014 Michael Flynn backed up the sex discrimination charge brought by Gritz against McCabe and other top people at the FBI.  Surprise…two years later Flynn is the subject of a McCabe-led FBI investigation about how he supposedly colluded with the Russian ambassador.

There was never anything to the Flynn/Russia story, and I even have strong doubts about Flynn lying to the Vice President, because Pence is an establishment globalist insider who wouldn’t want a man like General Flynn in the administration. If there was any lie by Flynn, it had to be inadvertent simply because of the stature of this General.  Of course, there’s also the possibility the General didn’t fully trust Pence, but that is simply conjecture from this writer. 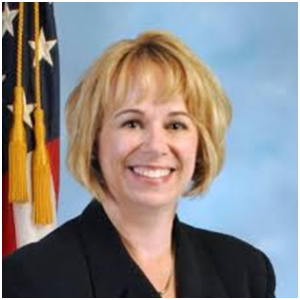 Flynn’s intervention on behalf of Supervisory Special Agent Robyn Gritz was highly unusual, and included a letter in 2014 on his official Pentagon stationary, a public interview in 2015 supporting Gritz’s case and an offer to testify on her behalf. His offer put him as a hostile witness in a case against McCabe, who was rising through the bureau’s leadership ranks.

By the way, McCabe spent 30 minutes being interviewed by Trump for FBI Director and was rejected.  Christopher Wray was chosen instead.

General Flynn, who led the Defense Intelligence Agency, worked closely with Gritz to find terrorists overseas. He said it’s a shame the FBI let go of someone with years of national security experience.  “She was one of the really bright lights and shining stars early on who got it when it came to the kind of enemy that we’re facing, and I just thought she was a real pro.”

It seems she was not believed, as there was no support for her from anywhere except from Flynn. Gritz ended up being fired, her security clearance pulled, and she ends up without a job living back at home with mom and dad. She also believes the FBI is blackballing her in her field so that she cannot get another job.

Flynn defended her and then two years later, Flynn is under investigation by the FBI for supposedly colluding with the Russians.

Who within the FBI had a personal reason for wanting to take Flynn out? The answer, obviously is Andrew McCabe.  The FBI’s leaking of adverse information about Flynn was unconscionable. If McCabe is responsible for it, he should be held accountable.

The WSJ reported that the political organization of Virginia Governor Terry McAuliffe gave nearly $500,000 to the election campaign of the wife of an official at the FBI who later helped oversee the investigation into Hillary Clinton’s email use.  Jill McCabe ran for a Virginia State Senate seat as a Democrat in 2015, and she is the wife of then deputy FBI Director McCabe.

The Journal also stated that it was McCabe who told lower-level FBI investigators to “stand down” in their inquiry into whether illegal influence-peddling or financial crimes were being committed at the Clinton Foundation. Meanwhile, McCabe did not recuse himself from the investigation into presidential candidate Hillary Clinton’s emails, despite an apparent conflict of interest involving his wife.

Remember McAuliffe was prominently featured last August, 2016 for his decision to restore the voting rights of some 13,000 West Virginia ex-felons, an effort he was expected to continue until the voting rights for all 200,000 ex-criminals have been restored.  Why?  So they could vote for Democrats.

The WSJ added that the Virginia Democratic Party, over which Mr. McAuliffe exerts considerable control, donated an additional $207,788 worth of support to Dr. Jill McCabe’s campaign in the form of mailers, according to the records. That totals to slightly more than $675,000 to her candidacy from entities either directly under Mr. McAuliffe’s control or strongly influenced by him.

It defines prohibited political activity as “any activity directed at the success or failure of a partisan group or candidate in a partisan election.” 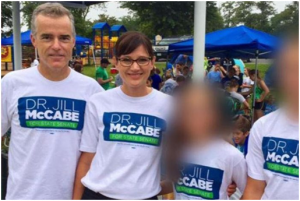 There are too many questions about McCabe’s actions during his wife’s campaign.  McCabe attended a meeting with his wife and McAuliffe on a Saturday in March 2015 specifically to discuss having Jill McCabe run for state Senate in Virginia as a Democrat.

The Office of U.S. Special Counsel, (OSC) the government’s main whistleblower agency, is investigating McCabe’s involvement.  The agency’s probe was prompted by a complaint in April from Robyn Gritz, who is suing the FBI and McCabe alleging sexual discrimination during her 16-year career.  She forwarded social media photos showing McCabe wearing a T-shirt supporting his wife’s campaign during a public event and then posting a photo on social media urging voters to join him in voting for his wife.  She filed the complaint alleging the social media photos are evidence of possible Hatch Act violations. 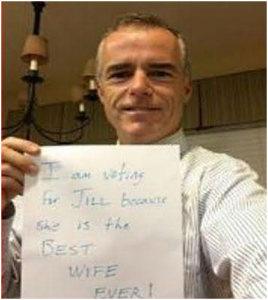 “I am voting for Jill because she is the best wife ever,” McCabe put on a sign that he photographed himself holding. The photo was posted on her social media page a few days before the election, in response to Dr. Jill McCabe’s plea to “help me win” by posting photos expressing reasons why voters should vote for her, according to the complaint.

Other social media photos in the complaint showed McCabe’s minor daughter campaigning with her mother, wearing an FBI shirt, and McCabe voting with his wife at a polling station.

The Hatch Act prohibits all federal employees from engaging in election activities during work hours, but most are free to involve themselves during off hours.

Gritz argued in her complaint to the OSC that the photos suggest McCabe violated that standard.

“As a former FBI agent, it is my understanding that we were held to a higher level with regard to the Hatch Act,” Gritz wrote in her OSC complaint. “While I’m filing this complaint, I am doing it due to the large number of current, former and retired FBI agents who know if they were acting such as McCabe we’d be already on leave without pay, under investigation and assured of being in violation. We are all under the impression that these are, in fact, violations.”

Richard Painter, the former chief ethics lawyer for the White House, said that the social media photos and the McAuliffe meeting documents raise serious questions because FBI and intelligence community officials must adhere to more stringent rules under the Hatch Act.

Former FBI Assistant Director James Kallstrom said McCabe may not have the bureau’s rank and file behind him.

“I’ve talked to numerous agents that have some knowledge of what’s going on inside the FBI,” said Kallstrom. “The appearance of conflict of interest is substantial, and you can’t have a high position in the bureau and have even the apparent conflict of interest.”  Kallstrom is not betting on McCabe lasting much longer at the bureau.

Sen. Charles Grassley, R-Iowa, believes McCabe also has a conflict of interest in the ongoing probe into alleged Trump collusion with Russia in the 2016 election.

This fallacious and distorted probe already cost retired U.S. Army Lt. Gen. Michael Flynn his job as Trump’s national security adviser.  And that is the greatest loss to this administration.

P.S.  We are grateful to all our readers for helping us bring NewsWithViews articles into your homes every day.  It is only with donations from our many readers that we continue.  Please help NWVs stay alive and well by sending your donations here.