Former U.S. Attorney for the District of Columbia (1983-1988) and husband of Trump legal adviser Victoria Toensing , Joe diGenova stated on Fox News Channel that Special Counsel Robert Mueller and his team of investigators/prosecutors don’t have the right to issue a subpoena to force President Donald Trump to answer questions to be used in the impeachment proceedings against Trump.

A career prosecutor himself,  diGenova went on to taunt Mueller and told him to go ahead with the subpoena that he knows is illegal and unconstitutional and see what happens.

DiGenova told Fox News host Judge Jeanine Pirro that Mueller’s investigation has nothing whatsoever to do with any Russian collusion. He went on to say the ultimate goal of Mueller’s action are either bringing down President Trump or making him a one-term president.

DiGenova, who is working with Trump’s legal team, is just one of many legal scholars and law enforcement officials who believe Mueller’s continued “pseudo-investigation is nothing more than a prosecutor who goes to court without a real case,” said former police officer and prosecutor Jason Pilliar. “It’s plain to see that Mueller’s credibility is in the toilet, but he lacks the will to flush that toilet,” Pilliar added.

According to news reports, someone involved in the investigation leaked some of the 44 questions Mueller wants to ask Trump. However, a reading of those questions appear to have nothing to do with the baseless allegation of Trump-Russia collusion to beat Democratic presidential candidate Hillary Clinton.

An acknowledged legal scholar, diGenova said, “It appears that the ambiguous questions are meant to 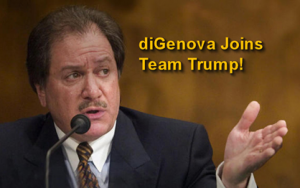 be a perjury trap if Trump overlooks a small minor detail.”  Other legal experts such as former police detective and prosecuting attorney Michael Barker have accused Mueller’s team of using the same tactic on another target — Lt. Gen. Michael Flynn. “Gen. Flynn is being called a convicted liar, but there appears to be no evidence of his lying. Actually, I see more evidence of Mueller, James Comey [fired FBI director], and Mueller’s boss Rod Rosenstein lying than I do with Flynn’s statements,” said former New York police detective Iris Aquino.

According to diGenova, who appeared on Tucker Carlson’s FNC show, Mueller is known as a prosecutor who has flagrantly spent U.S. taxpayers upwards of 100-million-dollars while being party to unethical and illegal behavior. https://youtu.be/CN9BbXICq3Y

In the past, Mueller convicted four men in Massachusetts that he knew were innocent. He did it by 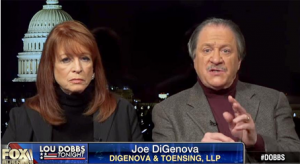 withholding evidence that proved their innocence, according to former Boston newsman now Newsmax TV host Howie Carr. Carr said on the air that two of those men served more that 20-years in federal prison while two others died in prison. That travesty of justice resulted in a lawsuit in which taxpayers were responsible for a 101-million-dollar settlement.

In another travesty of justice,  Mueller was convinced he had the right man in the infamous anthrax case in 2001. His leadership on that case proved he had no experience with anthrax. Mueller was so certain of the suspect’s guilt that he ignored a tip that “fingered” the real perpetrator. His actions got the suspect fired from a security job and caused him to be ostracized. That case ended up costing the taxpayers close to 10- million- dollars.

DiGenova said to Jeanine Pirro, another career prosecutor, district attorney and criminal court judge, that If there is any justice in the world, Robert Mueller will get a close up from the inside of a prison cell. He’s already ruined too many lives.

The Washington Post reported Tuesday Mueller raised the prospect of a presidential subpoena in a recent meeting with Trump’s legal team.

A poll released on June 5, 2018 reveals that a majority of Republicans and a growing number of Democrats believe these supposed protectors of the American people are in reality politically-motivated lawbreakers working on behalf of a cabal of crooked, dishonest politicians and wealthy leftists who control the nation’s wealth.

The nationally-recognized polling company Rasmussen Reports released their latest political findings on Tuesday and it’s not what the Democratic Party and supporters were counting on as they approach the November elections.

While most Americans believe that President Donald Trump never colluded with members of the Russian government to steal the election from Hillary Clinton, the poll shows that now a majority of voters believe that senior law enforcement and counterintelligence officials broke the law in their pursuit of “putting stink” on Trump’s campaign to prevent him from winning the presidency.

Even Democrats are becoming more convinced. Nearly a third of Democrats, 29 percent, “believe these officials are Very Likely to have broken the law.” That is up from 22 percent in February.