As the cities of Minneapolis, Los Angeles, New York and others across the nation are experiencing the anger, violence and destruction of some Americans who’ve taken to looting businesses, attacking police station houses and torching neighborhood businesses and other structures,  U.S. Justice Department and FBI investigators are pursuing the new allegation: That the alleged killing of a black security guard by a white city cop had more to do with workplace violence than with racial bias.

According to a police officer from the Minneapolis-Saint Paul area, “The now disgraced law enforcement officer moonlighted at a nightspot that had a need for professional security officers to maintain the peace in the club which served liquor and had customers who pedaled marijuana, heroin, cocaine and designer drugs to their fellow patrons.” 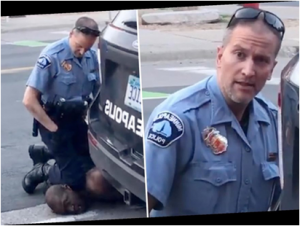 Officer Derek Chauvin became overzealous when the club hosted special events that attracted black customers. The owner claims the cop responded to violence by taking out his police-issued pepper capsicum and spraying not only the people involved in an incident but innocent members of clientele.

“He would [pepper spray] everyone instead of just apprehending and removing the people who were fighting,” said Maya Santamaria, who owned the El Nuevo Rodeo Club [The New Rodeo Club] in Minneapolis.

On Memorial Day, blacks, Latinos and some whites began street marches and protests first in Minneapolis and then in other cities after the apparently out-of-control cop was captured on a witness’ cellphone video as he knelt on the neck and carotid artery of his former co-worker George Floyd for more than eight minutes. During Floyd’s arrest on suspicion of passing a counterfeit bill the four responding police officers including Chauvin failed to find out the nature of the alleged counterfeiting complaint by a store owner.

Floyd died in custody and Chauvin was fired Tuesday and arrested Friday on charges of third-degree murder and manslaughter. The three other officers who took part in the arrest were also fired, and they remain under investigation.

While Chauvin’s off-duty job at the El Nuevo Rodeo club stretched over 17 years until a few months ago, Floyd only started working there recently as a security guard and only worked about a dozen special events.

“The workplace is the scene of almost one million violent crimes each year,” claims former Bureau of Justice Statistics director Lawrence Greenfield. “About 10 percent – or 100,000 – of these workplace crimes involve offenders armed with handguns.”

Of the approximately 3.2 million crimes and thefts in the workplace, about 500,000 victims lose an estimated 1.8 million workdays each year and $55 million in lost wages, not including days covered by sick or vacation leave. Among women who experience crime at work, 40 percent are attacked by a stranger, 35 percent by a casual acquaintance, 19 percent by a well-known acquaintance, and one percent by a relative. About 5 percent of workplace attacks on women are perpetrated by a husband, boyfriend, or former boyfriend.

One study from the National Security Institute indicates that workplace homicides totaled 7,600 in one 10-year period, although the NSI concedes that this figure may be overly conservative because of data gathering limitations. The actual number of occupational homicides may be greater than reported because of the methods used to collect information – mostly death certificates – tend to underestimate the total number of deaths, according to the National Institute for Occupational Safety & Health.

Of the 7,600 homicide victims, 80 percent were male. The homicide rate for male workers is three-times that for women. Nonetheless, homicide was the leading cause of death from occupational injury among women, causing 41 percent of all deaths among women as compared to just 10 percent among men.

Nearly half of the workplace homicides occurred among workers aged 25-44, but workers aged 65 or older had the highest rate of occupational homicide. Additionally, 75 percent of the victims were white, 19 percent were African-American, and 6 percent were Latino or other races. However, the rate for workplace homicide among black workers and other races was more than twice the rate for whites.

As far as weapons of choice, firearms figured in 75 percent of workplace homicides. Knives and other types of cutting and piercing instruments accounted for only 14 percent of these deaths. Information contained on death certificates doesn’t allow identification of the circumstances of homicides in the workplace, but the types of high-risk workplaces and occupations suggest that robbery is the predominant motive.

Some homicides are caused by disgruntled workers and clients, or by domestic violence which may spill into the workplace. An increasing number of these incidents involve one employee killing another over a disagreement.  Violent employees have killed co-workers, supervisors and personnel staff in several high-profile cases such as the shooting of several personnel office workers by a former employee at New York City’s Beth Israel Medical Center.

According to a study released by the National Association of Chiefs of Police, based on figures submitted by 16,149 law enforcement agencies (up from 15,254 agencies in 2016), provide information about the offenses, victims, offenders, and locations of hate crimes.

The reason for the lack of accuracy in the yearly released UCR’s documentation is the fact that it is a voluntary program and as such for whatever reason, local police departments may opt to withhold possession.

Law enforcement agencies submitted incident reports involving 7,175 criminal incidents and 8,437 related offenses as being motivated by bias toward race, ethnicity, ancestry, religion, sexual orientation, disability, gender, and gender identity. Please note the UCR Program does not estimate offenses for the jurisdictions of agencies that do not submit reports.