Last Saturday, June 30, 2018, Mayor Rudy Giuliani and a number of high-ranking dignitaries, including generals from countries in the Middle East, Europe and North America participated in a propaganda event in Paris, hosted by NCRI (The National Council of Resistance of Iran or People’s Mujahedin of Iran (MEK), an Islamic Marxist group to support the NCRI’s standing as government in exile.

This is not the first-time U.S. officials have attended MEK events. Despite the fact that Mujahedin-e Khalq (MEK) had been formally designated for 15 years by the US State Department as a “foreign terrorist organization.” Giuliani, along with Trump’s National Security Adviser John Bolton and former Obama administration National Security Adviser James Jones, have been known to appear in MEK events for years.

The MEK was instrumental in the success of the Islamic revolution and in particular, installing the Ayatollah Khomeini. This group has plenty of American blood on its hands, as well as that of thousands of Iranians killed while the group was a strike force serving Saddam Hussein in the 1980s and ’90s.

The MEK has paid Giuliani handsomely for years—$20,000 or more, and possibly a lot more—for 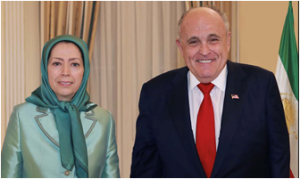 brief appearances before the group and for lobbying to have it removed from the State Department’s list of Foreign Terrorist Organizations (FTO), which occurred in 2012 under then, Sec. of State Hillary Clinton. “Other American advocates have been well paid, hired through their speaking agencies and collecting fees of $10,000 to $50,000 for speeches on behalf of the Iranian group. Some have been flown to Paris, Berlin and Brussels for appearances.”

In Giuliani’s case in particular, the deception is rather striking. “America’s mayor” has shown himself as a crusader in the fight against “Islamic terrorism” Yet he appears to feel that feasting at the table of Islamo-Marxist terrorists who have assassinated Americans is in no way inappropriate. Outrageously, Giuliani said the current ruling system in Iran “must be replaced by a democratic government which Madam Rajavi represents” This is like saying Adolf Hitler’s regime should be replaced by Joseph Stalin.

The History of MEK

MEK history stretches back to the 1960s, when it was founded by a group of Iranian (so called) students who opposed the shah and espoused an ideology that mixed Shiism—particularly the cult of martyrdom—and Marxism. Along with the group’s anti-regime sentiment came a hefty dose of anti-imperialism and hatred of the United States and Israel. Some of its members trained in PLO camps in Lebanon and Jordan. 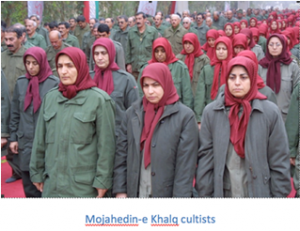 According to Human Rights Watch who interviewed several former MEK members, the organization is a cult that has kept its members virtually imprisoned in a compound in Iraq and controlled them psychologically. They eliminated anyone who expressed their intent to leave.

A RAND report commissioned by the US DOD found that the MEK is a cult that utilizes mind control and practices mandatory divorce, celibacy, authoritarian control, forced labor, sleep deprivation, physical abuse and confiscation of assets.

Most Iranians inside Iran believe that if Rajavi is given the chance to return to Iran, the MEK would become the Pol Pot of Iran. The expatriate Iranians in the U.S. are indeed diverse. A great majority support a democratic republican form of government. Some support a constitutional monarchy. A very small minority are of the communist-extreme left persuasion. And a few belong to the Islamist-Marxist gang of the People’s Mujahidin. This latter group has about zero support among Iranians, both in Iran as well as abroad. They are thoroughly despised by the overwhelming majority of the people for being cultists, Islamists and at the same time traitors for being in league with Saddam Hussein against Iran during the past Iran-Iraq war.

Assuming that money is not a factor, why would such prominent Americans support once an officially designated Iranian terrorist group? It’s a straightforward, enemy-of-my-enemy proposition: the MEK 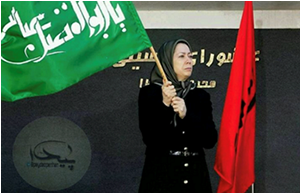 opposes the theocratic government in Tehran, and so do we. But, the enemy of my enemy is still not my friend.

If we are going to support an overthrow of the Iranian Islamic Republic, we have to pick the right partners who will lead to a secular democracy in Iran.  Not this group. This would be worse than the instalment of the Ayatollah Khomeini by former President Jimmy Carter.  And not to mention, who has given Mr. Giuliani and others the right to impose a terrorist group on the Iranian people after 40 years of compulsory Sharia Law? Haven’t we learned the lessons of history?

Iranians who are living under the Islamic regime in Iran, truly despise the MEK. Even more so that the current Islamic regime. They are asking for a referendum on the theocratic ruling system in the Islamic Republic.

The best option to dislodge the mullahs is to support the Iranian people. We have invaluable allies on 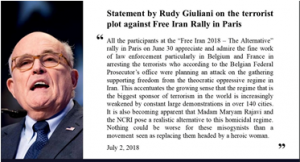 the ground in Iran. There are some 50 million Iranians who are the best hope of the world in that part of the world. These enlightened Iranians despise both the Mullahs and the MEK while having no animosity toward Israel or the United States. Most of these people are well-educated, smart and have broken away from the slavery and fraud of Islamism.

They are in the best position to send the Mullahs packing for good. Instead of throwing a lifeline to the sinking ship of the Mullacracy, or supporting terrorist groups, we must act resolutely in doing everything non-violent to help them defeat the Mullahs. It is our best bet.