Sadly, my wife Mary and I had to euthanize Sammy, our beloved 15 and a half year old greyhound. Due to his unusually large size, his former owner named him Samson. We called him Sammy.

After Rush, our border collie and Puppy, our cocker spaniel died of old age, Mary said her next dog would be small enough to carry in her purse.

Around 13 years ago, I was sitting on my sofa watching NFL football when I felt a presence in the room. Upon turning around, I was face to face with a huge dog with a cast on his broken hind leg.

A vendor at the convention Mary attended was looking for homes for greyhounds who were retired from racing. If not adopted, the beautiful dogs could be euthanized. So much for Mary’s plan for a dog to fit into her purse.

I believe our pets come to us via divine assignment. Every pet we have had came to us through unexpected circumstances. 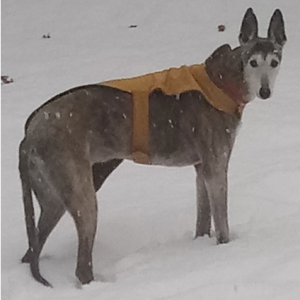 Sammy was a gentle giant who loved people and socializing with other dogs. He would never fight another dog unless in self-defense.

I like to think of Sammy as our patriot dog because of what he endured for our country. For several years, Mary and I spent a large amount of time traveling the country with the Tea Party and the Conservative Campaign Committee. We were working to elect conservatives in house and senate races. We also worked to elect President Trump.

For a while, Sammy was home alone with a pet sitter stopping in twice a day to feed and walk him. The sitter reported to us that she thought Sammy was sad and lonely.

We found Ms Sue, a great new pet sitter. She would move into our home whenever we left town on another campaign adventure to save America from socialist/progressive anti-American Democrats. Sammy loved Ms Sue.

Sammy always greeted us with great excitement every time we returned home. After Ms Sue began staying with him in our absence, Sammy did not even raise his head from his bed or look in our direction when we came through the front door. That was annoying.

Had this wicked woman stolen my dog’s affection? Just kidding.

Old age caused Sammy to lose mobility and control of his body. Though it pained her deeply, Mary knew it was time to let Sammy go.

The veterinarian was wonderful, making Sammy’s passing painless and peaceful. He said it was rare for such a large greyhound to live 15 and a half years. Mary always fed Sammy bones and raw meat which is called BARF.

In a small way, Sammy’s time home alone without us contributed to Republicans winning the senate and Trump winning the White House. Mary and I went to lunch to celebrate the life of Sammy, our patriot greyhound.