…and other unrests in Topeka, KS, the heart of America

A picture was leaked of a training session at a Goodyear plant in Topeka, KS on Thursday, August 18, 2020.  It shows a slide from the presentation outlining their “zero tolerance” policy.  On it you’ll find references to BLM and LGBTQ are acceptable, but references to Blue Lives Matter or All Lives Matter or MAGA are unacceptable.

I reached out to Goodyear, via their Corporate phone number [330.796.2121].  After being on hold for over thirty minutes, I was able to speak with a customer service representative.  The representative was aware of the picture because she had fielded other calls about it.  She indicated the headquarters at Akron, OH were looking into it.  She seemed genuinely surprised and told me she had not had any training like that where she was. 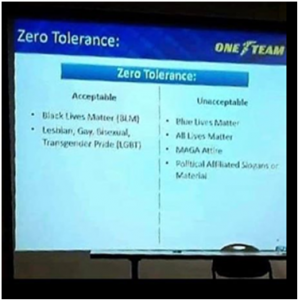 When I asked for clarification of whether Goodyear still contracts the tires for the police departments, she assured me they did indeed.  I said, “Well this isn’t going to go over well here.”  She agreed and said, “It won’t go over well here either!”

After doing some local inquiries in Topeka, I was able to confirm this was a true picture of a very real training that workers at the Topeka Goodyear plant have been required to go through.  I was told the local union (307) had endorsed the training, but has since (as of today) begun backpedaling over it.  I have not gotten an official statement of that, but a worker there indicated that was his experience as an employee and union member there.

When I reached out to corporate Goodyear, they took my name and phone number and said they would be in contact with me eventually.  I am awaiting that call.  In the meantime, the local news covered the story here.  As Thursday’s business day drew to a close, Goodyear sent the following response to the local channel WIBW.

“Goodyear is committed to fostering an inclusive and respectful workplace where all of our associates can do their best in a spirit of teamwork. As part of this commitment, we do allow our associates to express their support on racial injustice and other equity issues but ask that they refrain from workplace expressions, verbal or otherwise, in support of political campaigning for any candidate or political party as well as other similar forms of advocacy that fall outside the scope of equity issues.” —Melissa Monaco, The Goodyear Tire & Rubber Company [Source]

Now unless my reading comprehension is lacking, this pretty much reaffirms their training slide.  You can express your views about racial injustice but only as they define it, i.e. Black Lives Matter, and only if it aligns with the narrative they approve.  They refuse to acknowledge that showing support for a sitting American President is an expression of the First Amendment, just like showing support for a favorite athlete, or entertainer, etc.

They have narrowly channeled the First Amendment in the workplace to “equity issues”.  Further, they have chosen to narrowly define those “equity issues” as only pertaining to BLM and LGBTQ.

Their official response refused to even acknowledge their dismissal and vilification of Law Enforcement Officers.  Apparently they can reap the financial reward of contracts with Law Enforcement, but they cannot allow employee support of such.  This should prove interesting in the days to come.

An employee of the Topeka Goodyear expressed that “heads will roll” because this has gone public.  He stated that not only will the person who gave the training session face severe consequences, but he thinks if they can find the leaker, he/she will be terminated.  It’s interesting how the cockroaches scurry when the light gets turned on, but the person who switches the light on is the villain.  Let’s see what happens in the coming days.

Speaking of police matters in Topeka…

Ironically, Topeka, the capitol city of Kansas, is engaged in its own struggle with Campaign Zero who have sent their activists in conjunction with Black Lives Matter’s Topeka leader, Pjay Carter, to bring Police reform to Topeka.  Allegedly they want the Topeka Police Department to adopt the 8Can’tWait  reform points, under the umbrella of Campaign Zero.  But as retired Lieutenant (of TPD) Ron Gish pointed out, all of the 8Can’tWait campaign’s proposals are already implemented in the Topeka Police Department.  The (Topeka) City Council has included removing qualified immunity from police officers’ protection.  The ramifications of this are broad.

Gish, with 34 years of law enforcement experience, also stated in a letter to the City Council:

Police recruiting numbers across the nation are down 60% since the George Floyd incident! Good officers are walking away. They are submitting paperwork to retire earlier than they planned. Others are finding other careers. All the investment we have in these officers is being lost. If qualified immunity is removed, I don’t know why a law enforcement officer would continue putting themselves at risk. The daily risk of being physically harmed, killed in the line of duty or sued is already too high.

While the initiators of this agenda dare not call it defunding the police (at least not in the Midwest), if you begin to follow the logic and purposes of these initiatives, you’ll see that’s what the objective appears to be.  When you castrate the tools of enforcing the law, you lose the ability to enforce the law.  This may very well be the intention.

Mr. Carter, the BLM organizer in Topeka, sounds level-headed and proactive (to me).  He is genuinely concerned for the welfare of black people at the hands of police and is representing from that perspective.  He makes valid points and seems reasonable and fair in his concerns.

But as the national scene has played out, the movement of well-intentioned concerns can easily be hijacked by those trying to commandeer a vehicle for their own personal agenda.  This article about Campaign Zero doesn’t hide the fact that George Soros has latched on to the movement.  I’m going to guess the sincere blacks who have sincere concerns do not really know Soros’ intentions, but are more than happy to take his money.

The author of the article states, “Inside the Washington office of the Open Society Foundations, the grant-making network founded by liberal financier George Soros, there was a sense that Black Lives Matter was on the cusp of something bigger — and a real desire among people with money to make that happen.”

People within the organizations for police reform and against police brutality don’t think 8Can’tWait’s platform is radical enough.  For that we have 8toAbolition, which calls for a defunding and “demilitarization” of the police in their first two steps.  So right off the start, they want a police presence removed altogether.  After that they’d like to release criminals, repeal certain laws, and provide housing.  Here are their eight initiatives: 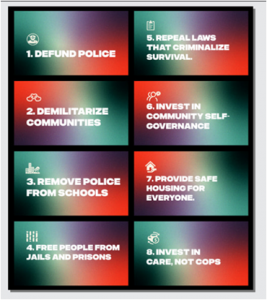 This article goes on to say,

The original campaign, #8Can’tWait, has now updated its website in response, with the organizers saying that they now realize that they “unintentionally detracted from efforts of fellow organizers invested in paradigmatic shifts that are newly possible in this moment.” On the ground, the calls to defund the police are gaining traction. The mayors of Los Angeles and San Francisco want to shrink their police budgets, and New York City now plans to move some funding from the NYPD to youth and social services. Minneapolis is going even further, with plans to disband its police department and rebuild a new system for public safety.

Judging by cities like Minneapolis, Portland and Seattle, we can see a decreased police presence does not decrease crime.  Austin, Texas has recently defunded their police department on a unanimous vote with their City Council.  I’m curious how the residents these councilmen/women represent feel about this.  Have their decisions represented their constituents’ will as well?

I know in Topeka of the nine city council members, four have reputedly already aligned with the efforts to move forward in this direction, with a fifth likely.  They need only one more to make these changes.  The mayor, who is making an ambitious bid to unseat a Republican Congress seat this November, has thrown her weight behind it.  There is, obviously, an agenda to align with if you run in Democratic circles.

It would behoove American citizens concerned about the future of their communities to get and be involved in their local politics.  There are organized movements with a lot of money behind them to fundamentally change the structures of our institutions.  The conversation should be about whether such changes are in the spirit of our nation’s principles, and if they are representing the good of our communities.  But if the happenings in Topeka, Kansas are an indicator, quiet meetings behind the scenes are trying to move agendas forward without public involvement.