Behold, God is my salvation; I will trust, and not be afraid: for the Lord Jehovah is my strength and my song; he also is become my salvation. Isaiah 12:2

Be careful for nothing; but in everything by prayer and supplication with thanksgiving let your requests be made known unto God. Philippians 4:6

By Monday morning, the 11th of September, praying Americans were thanking God for hearing our many prayers for Florida and Hurricane Irma’s devastation.

For days, we watched the arrival of a Hurricane that was supposed to be so huge that all of the State of Florida would be decimated.  The media constantly repeated that this was the biggest storm of the century, it was not.  They were so excited about this horrible storm that my husband could no longer stand listening to them, and muted the sound. 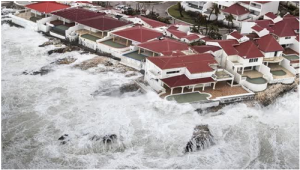 I am glad those in charge, the Governor, the police, the first responders, the EMT’s, and all others were on guard to remove people before this evil monster hit.  They did a fabulous job, and of course they’re getting no credit because credit would go to Republican Governor Scott and President Trump.

Lives were lost and property was damaged and destroyed, but far less than what was forecast, and I fully believe it is because we kept asking our God to move this thing, to take His Hand and still it, to stop the devastation, to quell the storm, to ease the wind, to calm the waters, and to bring peace.

And He did.  Praise His Holy Name.

If It Bleeds, It Leads

The news media never changed the story, it was going to be the worst Florida Hurricane ever.  But our God had other plans.  The golden tendrils of prayers we sent to the throne asking Him to quell this monster were answered.  Yet, we keep hearing horror stories, and there are areas that are devastated.  Key West, Key Largo, Jacksonville, Miami, St. Augustine, Marco Island, and Naples were some of the very hardest hit by Irma. 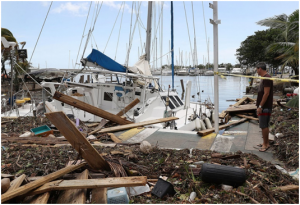 This picture is at the Dinner Key Marina in Miami.

Fernando Oropeza walks up the stairs after taking his dog Simon out for a walk at a hotel on September 10, 2017, in Fort Myers, Florida.  They were soaked.

In East Naples, a man inspects the damage to his neighbor’s home.

Yes, there is a lot of damage, but it could have been far worse.  Unbelievably, my friend who lives in Clearwater, never lost power, and that in itself is a miracle because Irma was forecast to literally take out the Tampa area.  My friends in The Villages were spared, friends in Coral Springs, and friends in West Palm and Eustis were spared.  Thank You Lord!

As Rush Limbaugh said on Thursday, the 7th, he watches the smaller outlets that report the changes in the forecast, whereas the larger ones are locked into what they decided from three days prior to the first land hit by Irma.  His viewpoint was that it could change from what was forecast, and it definitely did do that.  To God be the glory! 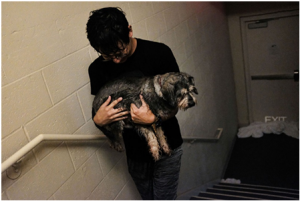 The Taxpayer Cost of Harvey and Irma

While at this point it’s hard to know how much damage there is, these storms seem likely to have caused $150 billion to $200 billion in total damage to homes and furnishings, vehicles, commercial real estate, and public infrastructure. This is comparable to the property loss resulting from Hurricane Katrina.  The federal government has approved aid, and will now approve more for Florida.  US taxpayers will have to foot the bill, but that’s not the end of it.

Nearly every single homeowner in the US has homeowner’s insurance.  Our insurance costs don’t have steep increases in years when there are no natural disasters, because the companies are in competition with each other.  But just wait for your bill after these two hurricanes.  There will be a steep rise because this is when the insurance companies make their money and build their extravagant buildings.  Yep, we’re about to be gouged again. 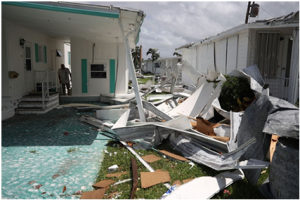 Years ago, I asked a secretary at our insurance company why the huge increase happened one year, and she said it was because we had to help pay for the natural disasters that year.  I told her I didn’t have any natural disaster, and I thought the increase was over the top.  We expect a much higher premium this year.

Be Cautious with Donations

The Hollywood elite have gathered together for a telethon to collect monies for various organizations, mostly the American Red Cross, (ARC) which I wouldn’t give a dime to.  Of course, Jennifer Lawrence is claiming hurricane Harvey and Irma are Mother Nature’s divine judgement and revenge on President Trump for his attitude towards global warming. Link  What a bunch of leftist horse hockey.  But this is what was spewed by Hollywood elitists, that global warming and climate change cause these hurricanes.

Hmmm, if the big earthquake comes and Lawrence is in California and falls into the sea, what divine judgement would that be?

Donors might be surprised to learn the American Red Cross (ARC) doesn’t make clear what percentage of their dollars will go directly to helping the victims of the storm.  Dating back to 2014, NPR and Pro Publica have reported that the Red Cross misstated how donor dollars are spent.

A study released by Sen. Charles Grassley, R-Iowa, concluded that the Red Cross had spent $124 million, one-quarter of the money donors gave for earthquake relief in Haiti in 2010, on internal expenses.  Their CEO earns $500,000 a year, but hasn’t had a raise since 2008.

I remember how angry people were when they found out that monies they’d donated after 9/11 to the Red Cross were not all going to 9/11 needs, but to various other areas.  People were astonished, and angry.

My uncles always told me they’d never give them a dime.  Why?  Because when these men were coming off the front in WWII, there was the Red Cross, charging 10 cents for a lousy cup of weak coffee instead of giving it to them.  But wait, there’s more…

Succumbing to pressure following the deportation of Danish Jews to Theresienstadt, the Germans permitted representatives from the Danish Red Cross and the International Red Cross to visit in June 1944. It was all an elaborate hoax. The Germans intensified deportations from the ghetto shortly before the visit to eliminate the overcrowding, and the ghetto itself was “beautified.” Gardens were planted, houses painted, and barracks renovated. The Nazis staged social and cultural events for the visiting Red Cross dignitaries. Once the visit was over, the Germans resumed deportations from Theresienstadt, which did not end until October 1944. 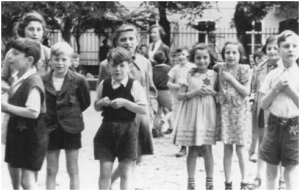 Here is a photo of Jewish children in the Theresienstadt ghetto taken during an inspection by the International Red Cross.

The Red Cross, told us no one was being brutalized or killed, and the camp was lovely, and of course there was no questioning or investigation of the people or the Nazis.

No, I wouldn’t give the lousy Red Cross a penny.

As for other large organizations, Brian A. Gallagher, President and CEO of United Way Worldwide, earns $1.2 million.

By contrast to the more excessive salaries, the Salvation Army CEO salary seems more reasonable, according to this quote from a 2016 article: “W. Todd Bassett, National Commander of the Salvation Army, was paid (along with his wife, who also works for the organization) an estimated $94,091 in salary and benefits in 2003 (including house and car). (Source: Fayetteville Observer).” The best approach is probably to look at a charity website and see if they have the CEO salary listed.

Christian organizations seem to be outgiving most others.  Samaritan’s Purse has an overall rating of 96.32, and gives nearly 90 cents of every dollar to help those in need.  That’s what you want to check when donating to any non-profit charity.  Franklin Graham’s organization is a nondenominational, Christian organization that provides spiritual and physical aid to people affected by disaster and poverty around the world. It focuses on helping victims of war, poverty, natural disasters, disease, and famine.  More information about Samaritan’s Purse.

I am not promoting them, just reporting that they have stretched their limits to help people in these hurricanes.  Please donate to the local food banks who need help as do the pet rescue organizations.  Do your own research and decide, but I would suggest you stay far away from organizations like the American Red Cross and United Way.

Whenever there are tragedies and natural disasters in America, her people, no matter their differences, always seem to come together, even if it’s just for a short time.  We’ve seen it time and again.  This is the norm, but then there are the few…

We’ve also seen the looters and those who refuse to help others in need.  Sometimes it can be a grave mistake.  And it all comes down to legalities rather than saving people from devastating storms.

The Marriott Hotel sent a rescue ship to the Caribbean after Irma, and left non-guests stranded on the dock.

The hundreds of people waiting on the dock in St. Thomas on Friday night, the 8th of September, had just survived a hit from Hurricane Irma that had crippled the airport and devastated pretty much every building not made of concrete.  Food and water were in short supply, and electricity was almost non-existent.  Hurricane Jose hadn’t turned north yet.  The people on the island feared they’d be wiped out with another storm on St. Thomas.

But a large ship with enough room to transport all the tourists was approaching the dock. Just in time, help had come.  But it hadn’t come, the ship refused to take on the passengers who were not guests of the Marriott although there was plenty of room to transport them to San Juan to get flights home.

The callousness of the Marriott for these people, both elderly and young couples with children, will cost them dearly.  Had they taken these people aboard and gotten them to San Juan, these folks would have stayed at Marriott Hotels the rest of their lives and talked about Marriott saving them for years. [Link]

Now they’ll tell everyone they know about the cold and heartless treatment of Marriott who left them stranded, and perhaps destroyed by another incoming storm.

God’s Hand moved Jose and another storm didn’t cause devastation, but no thanks to Marriott.