Home/March 2019, Opinions/Heartbeat Bills Could Lead To Roe Vs Wade Repeal

Heartbeat Bills Could Lead To Roe Vs Wade Repeal

The NY legislature has created a new Auschwitz dedicated to the execution of a whole segment of defenseless citizens. Satan is smiling.  —Charlie Daniels

And we call it pro-choice instead of murder of unborn babies.  So many euphemisms to hide the truth of this evil.  Many endangered species are protected and heavy fines and jail time result for the destruction of these creatures.  But our human babies are destroyed at the rate of 4,000 per day and we are now approaching 70 million dead children.  Many Americans are not aware that for nearly all of our country’s existence, taking the life of a baby in the womb was prohibited.

Everything began to change in 1967 after years of organized campaigns by pro-aborts. In 1962, Sherri Finkbine, of Phoenix, Arizona Romper Room fame, had taken a sleeping pill her husband brought back from London.  It was Thalidomide, a drug known for causing severe abnormalities of embryos.  This drug was prescribed to pregnant women for morning sickness and extreme nausea.  Finkbine traveled to Sweden for an abortion.  Her situation was used in campaigns to legalize the murder of unborn babies.

By 1970, four states, New York, Alaska, Hawaii and Washington passed laws that basically allowed abortion on demand.  Of those four, New York’s was the only law without a residency requirement and the state quickly became the nation’s abortion capital.

Just recently, New York’s Governor Cuomo was gleeful that he had signed the Reproductive Health Act, (another euphemistic term to describe baby murder) to allow abortion up to and even after birth, should a baby survive the abortion.  Other states are now following New York’s lead once again. The Governor said he was doing nothing more than codifying Roe v Wade.  This however is untrue, Roe only allowed abortion up to viability of the gestating child…24 to 28 weeks of pregnancy.  Yet, nothing in Roe stops the states from killing babies after viability and up to birth.

The New York bill is also part of a broader trend of left-wing states codifying a “right” to abortion in anticipation of a future Supreme Court ruling that could reverse Roe, restoring states’ ability to ban abortion themselves and automatically banning it in the handful of states with pre-Roe bans still on the books as we have in Tennessee.

Prior to Roe, only 20 states allowed abortion and 30 disallowed it.  It was strictly a state issue, and should have remained as such, because “abortion” is outside the scope of powers delegated to the federal government over the country at large.  Had it remained a state issue, many more Americans would be alive today. 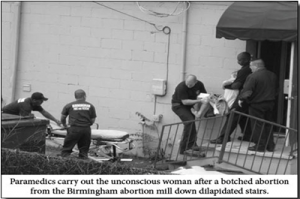 Many abortion clinics do not even meet basic building codes for emergency access.  Jill Stanek took the following pictures of a Birmingham abortion mill who had two botched abortions in one day.

The abortion industry routinely offers women grisly and unsanitary facilities. Deplorable conditions exist because of a lack of state or county inspections.  The Kermit Gosnell abortion mill was just one of thousands who are never inspected and were filthy.

Abortion is far more dangerous to the woman’s health than carrying the baby to birth.  We don’t know how many women are dying from abortions because the numbers are not being kept.  Neither do we have the numbers of women who have committed suicide because they murdered their own babies.  The CDC even says that only 45 of the 50 states in the United 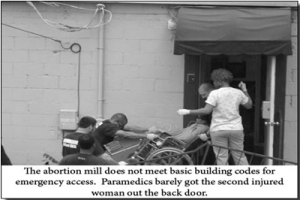 States actually keep abortion records. We really don’t know how many abortions are being done in the United States and we know even less about the complications and deaths.

Many of the heartbeat bills are written requiring abortion providers to listen for a heartbeat, but not all specify ultrasounds. Since the mid-1990s, several states have moved to make ultrasound a requirement prior to abortion, and I’m hoping more will do the same.

Qualified ultrasound providers can easily find a baby’s heartbeat after only a few weeks of gestation.  Save the Storks has built 40+ Stork Bus mobile medical units to help mothers make the choice to give life to 4,000+ babies. Save the Storks partners with local pregnancy resource centers to inform an expecting mother of all of her options so that she can make the best choice for herself and give life to her baby. 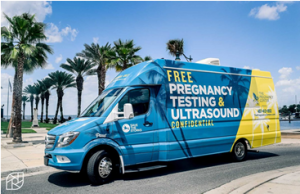 They save four out of five babies whose mothers board the Stork Bus for an ultrasound. Strong laws for ultrasound before abortion could save many more babies.

Fourteen states require verbal counseling or written materials to include information on accessing ultrasound services.  Twenty-six states regulate the provision of ultrasound by abortion providers. Three of those states, Louisiana, Texas, and Wisconsin—require the abortion provider to display and describe the ultrasound image. Guttmacher.org, a pro-abortion website, lists the state laws and policies and requirements for ultrasound.

States have passed several laws inhibiting abortions… waiting periods, restrictions on health insurance coverage, bans after 20 weeks of pregnancy because of infant pain, requirements that clinics meet ambulatory surgical center standards or requirements that abortion doctors have hospital admitting privileges and regulations for clinics to meet ambulatory surgical center standards, ultrasounds and now the heartbeat bills.  If you’ve never watched Silent Scream about an abortion on a twelve-week-old unborn baby, the short movie proves there is extreme pain for these little ones.

Do I trust abortion providers to tell a pregnant woman her child has a heartbeat?  I don’t, but new laws and regulations can actually save more babies.  The heartbeat bills have nearly all been challenged by federal courts, but states need to keep passing them.  And here’s why…

I asked three attorneys to explain to me the purpose of pushing the heartbeat bills when they are consistently are struck down.  Two of those attorneys spoke in legal terms that still didn’t make it clear as to why the politics of these bills are so important.  Finally, I asked another attorney to please explain it to me in layman’s terms.  The heartbeat bills have to do with the strategy of positioning an issue so that the US Supreme Court will review it.

My friend explained the structure of the federal court system, and stripped it down to the essentials we need to know regarding the necessity of pushing for more heartbeat bills to be passed in state legislatures and signed by the Governors.

In every lawsuit [which isn’t settled] one side loses. The side which loses generally has the right to appeal his cases.  His appeal is filed in one of

Ultimately, we want a lot of states to file heartbeat bills knowing that they will all get sued and that most of the Circuit Courts of Appeal will rule in favor of the baby killers. However, if the pro-life people can get just one Circuit to rule in favor of LIFE; then, they can show “conflict jurisdiction” to the US Supreme Court and perhaps they will overturn Roe v. Wade.

My attorney friend explained, “It’s a classic strategy – though I personally opt for the nullification remedy.  Still, there is no reason both remedies couldn’t be used – and the US Supreme Court might be more likely to overturn Roe v. Wade if some States have already manned up and nullified Roe v. Wade.  State heartbeat bills are fully constitutional – this is one of the issues reserved to the States or The People.”

There you have it.  Was my previous article wrong?  Maybe it was.  But here’s the thing…we have a slim chance with the heartbeat bills to get one Circuit Court to rule for the babies, and as my friend said, “Isn’t the money spent by the states worth trying to save babies?”  Yes, it is.

We need one challenged state heartbeat bill where a Circuit Court of Appeals rules for the babies.  Thus, we must urge the state legislators to write superb heartbeat bills, pass them in both houses of the legislature, and have them signed by the Governor.  Getting a case to the Supreme Court can take three to five years.  This gives our President time to possibly fill the court with another pro-life justice should either Justice Ginsburg or Breyer leave the court.  Amy Coney Barrett is a great pro-life choice.  Of course, timing is everything.

P.S. During the Trump campaign NewsWithViews articles had virus warnings appear when you opened them.  There was never a virus, it was an attempt by Google to keep people from reading truth. Now, Google has removed their ads from NewsWithViews because they don’t like the content of the conservative articles. Those ads generated between $500 and $1,000 per month to pay for the cost of running the website. They know that, and that’s why they’ve pulled their ads.  We need your help now more than ever. Please tell your friends to sign up to receive the daily emails, and remember NewsWithViews when you pay your monthly bills.  Please help us by donating here.