How Naturalism, Gender Identity And Pornography Are Inexplicably Entwined

The Problem with Choice

Choice without consequence is as old as the planet, and should be as obvious to the educationalist, the theorist, the scientist, and the humanist, as it is to those with just good old fashioned common sense.   We can’t have the   freedom to choose without accepting responsibility and also accountability on the outcome of our choices.

From even the smallest choice like the clothes we wear, to the food we eat, down to where we choose to go on holiday, each and every action we take has an outcome.

Unfortunately, in our fallen states of being, our choices are not always the wisest.   Temptation, selfishness, lust, and also a sense of entitlement (resentment) are a contributing factor which is also embedded in our psyche.

Therefore it stands to reason that the choices we make can harm or heal us.

‘Normalizing’ or ‘Glamorizing’ choices which obviously have the potential to seriously hurt people, and even drive them to suicide, has become a very fashionable new trend in presenting lifestyles to adults and more seriously to the next generation, our children. Where does our responsibility lie? 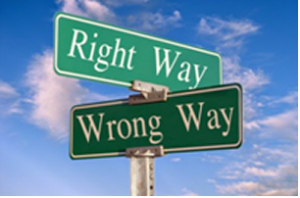 A new law which could come into effect in 2020 can rule that primary school children in the UK, aged from 4 upwards must be taught a positive view of non-traditional “families”, same-sex relationships and transsexual identities.   The teaching will come under ‘Relationship Studies’ and would be a mandatory part of the school curriculum, instead of ‘Sex Education’, from which parents can presently opt their children out of.

Recently, it was reported that up to 600 parents in Birmingham, UK, kept their children from school in a demonstration against relationship studies and a programme called ‘No Outsiders’  There was an emphasis on the demonstrators being ‘Muslim’.     However, concerned parents across the country have been petitioning the Lords Committee expressing their alarm at the deceptive legislation which will remove the parent’s choice for their child’s education in nursery school.

The ‘No Outsiders’ programme which was developed and created by Andrew Moffatt who is the Assistant Head Teacher at Parkfield Community School,  is a range of 35 (picture) books covering race, religion, gender, age, disabilities, sexual orientation, marriage/civil partnership and pregnancy/maternity.

♣  There is never a reason for bigotry at the school gates

Kenan Malik, an Observer columnist in an article printed in the Guardian attacked two issues with just one stone by labelling the demonstration as bigoted and likening it to a Tommy Robinson event spewing hatred, except it was Muslim parents spewing hatred towards gay relationships!

Whilst there is a very obvious pushback taking place within our schools against the indoctrination and the mandatory teaching of gender issues as being lifestyles to very young children, unfortunately there are now a few other new kids on the block waiting to join forces, which are subtly and not so modestly intent on mutilating the truly natural potential of creation.

Next month, families in the UK, are being invited again to a nude family fun event at Waterworld Aqua Park, Stoke on Trent.  The British Naturist Society who have advertised their event as being open to members and non members, and to all adults and children of any age are charging £21 for adult non members, £5 for children.   Under fives go free.

Whilst petitions against the events are also taking place around the country at similar venues, in relation to exposing children to adult nudity, the British Naturist Society who claim that they take their safeguarding and health and safety precautions seriously, still advertise that they exist to unite and support naturists, to protect naturist places and make social nudity more acceptable across the UK.

But naturist family events at public leisure centres are not the only places where nudity is becoming socially acceptable.

The infamous Channel 4 network in the UK which often crosses the boundaries of decency have been airing ‘literally’, a dating programme called Naked Attraction, where people looking for love choose their date not by viewing their face or getting to know the personality of someone they may be attracted to; but by choosing a partner from how they look in their ‘birthday suit’. The programme is at least honest if not shallow, in contrast to naturists who claim they are more interested in each others minds, rather than the obvious nudity of the strangers they may mix with.

In 2017, Paris also opened its first ever naked restaurant called ‘Au Naturel’ indicating that the drive by Naturist societies to make nudity more acceptable in the mainstream is ‘happening’.

Another popular Channel 4 TV programme which also crosses the boundaries of decency is The Sex Clinic where young and ‘active’ people are filmed being intimately investigated for transmitted sexual diseases.   The trailers to the programme are presented in a light hearted way in bright colourful clinics with attractive doctors.   The most recent episode was advertised as:

“Emily requests an STI test to make sure her hook-up isn’t cheating. Leticia seeks advice on bipolar and sex.   And a male stripper has a rash down below”[Link]

Dr Naomi Sutton, known as Dr Naomi in the programme hopes to de-stigmatise attitudes towards sexual health and promote healthier attitudes; but whilst her work as a Consultant Physician in Integrated Sexual Health at The Rotherham NHS Foundation Trust is valuable in helping under 16’s, trafficked women and victims of sexual assault, one cannot help but wonder what happened to the healthier attitudes we once highly held before sexual behaviour was de-stigmatised and an anything goes attitude replaced them, leading to the increase in sexually transmitted diseases which medicine now has to treat. [Link]

It is reported that the sexual health crisis in the UK with syphilis and gonorrhoea on the increase, is all due to government funding being withdrawn year upon year towards funding sexual health services.

“This government is presiding over a national crisis in sexual health, caused in large part by the decision to implement year-on-year cuts to the public health grant which funds sexual health services,” The impact of these cuts is being felt disproportionately by people in black and minority ethnicity (BME) communities, young people, and men who have sex with men – a group which accounts for 78 per cent of the new syphilis cases.

That is an interesting statement which you currently could not put pictures of in a 4 year olds book.

What is really natural?

It seems sad that the world can take what is truly natural and beautiful and alter it.   Even a beautiful display of flowers once connected and fed by the earth loses its life force once they are cut and arranged and displaying by human hands.

Naturists, who up until now have kept their love of being naked predominately to private beaches, are not always natural people in the truest sense of what that means.   In creative terms, and not evolutionary terms, in our fallen state a wonderful gift of modesty was given to us that would never allow us to expose ourselves to un-consenting adults, and definitely never to children.   It is why it is against the law, and indecent exposure is listed under the Sexual Offences Act 2003.   Are our concepts now being ‘toyed’ with?

Choice, that word, that gift, that curse, that we have and don’t take responsibility for, is being given to children as young as four years old in schools.   Children at Water World Aqua Park will see men and women who are strangers naked – and this is being portrayed as natural?  Children with same sex attraction and gender related issues are sadly also not been given the correct information.     Are they all being used?

The Emperors New Clothes is a more realistic children’s story on how we can all be taken in by swindlers.   Pretending to weave the finest cloth which could only be seen by the elite and not by anyone else including people considered stupid, a suit which doesn’t even exist is sold to the emperor.   Parading the streets in his nudity, and his ugliness, and not wishing to offend him, his public congratulate him on his beautiful new suit.

A child who did not see it necessary to pretend or offend anyone shouts “But he has nothing on” bursting the bubble of pretence until all the onlookers repeat what the child has said.   The emperor continues attempting to maintain dignity as though nothing has happened.   Who is the fool?

Telling children what is acceptable and that they can choose what they do with their bodies at any age is happening to younger and younger children.   What is the real agenda behind the visuals and the information that adults are feeding them, and how are we complicit in the next stage of sexualizing children?