Hypocrite: someone who conveniently forgets their own faults to point out someone else’s.

For what is the hope of the hypocrite, though he hath gained, when God taketh away his soul. Job 27:8 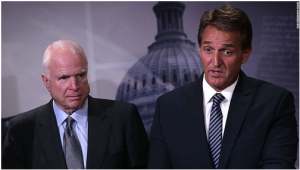 John McCain and his leftist buddy, Jeff Flake, along with Speaker Ryan all criticized Trump’s decision about Maricopa County’s former lawman. The pardon “undermines Trump’s claim for the respect of rule of law (lex rex) as Mr. Arpaio has shown no remorse for his actions,” said McCain.  Remorse for following the law??? How about your remorse Senator for allowing all our POWs and MIAs to die in Nam because you refused to release classified records!

What in hell is wrong with these three globalist neo-cons who are no more in the conservative camp than is Soros, the very one out to destroy Sheriff Arpaio.  Yeah, we know.

Flake said he would have preferred that Trump “honor the judicial process and let it take its course.” Arpaio was convicted of contempt of court for refusing to obey a judge’s order to stop patrols that focused on Hispanics as part of Arpaio’s crackdown on undocumented immigrants. He had yet to be sentenced but could have faced 6 months in jail. Please folks, vote the bums out.

I’m really tired of Sessions’ ability to evade doing the job he was hired to do, and he’s recused himself far too many times.  Yes, Sessions bailed out again, this time on Sheriff Joe.  The civil contempt lawsuit against Arpaio was brought by the ACLU and its counsel Covington & Burling, the law firm of Eric Holder.

The President had, before trial, asked Attorney General Jeff Sessions to review the Arpaio prosecution and to consider dropping the criminal charges. This request by President Trump was perfectly proper and within his authority as the chief law enforcement officer of the United States. Arpaio’s attorney, Larry Klayman, at the outset had suggested this approach to Sheriff Joe.

Klayman stated, “However, as was true of my similar request to have Sessions review the on-going and equally political prosecution of Cliven Bundy, Sessions abdicated his responsibility and refused the president’s lawful request, apparently claiming, without legal basis, that the request was improper.”  What total bull dung!

The latest outrageous determination by the DOJ is again protecting Hillary Clinton.  According to a delusional and very corrupt official in the FBI named David M. Hardy, who is the FBI records management section chief, there isn’t enough public interest in the Hillary Clinton case to justify releasing her records.  What?  Are you kidding me?  How many times did we hear, “Lock her up!”  Link

Why the hell isn’t Sessions cleaning house?  Is he another spineless weasel enjoined to the uni-party globalists?

Klayman is right, it’s way past time Sessions should man up and start doing the job he was hired to do. 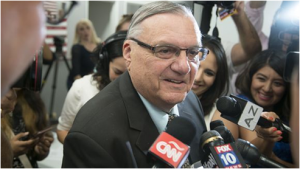 Every single thing Joe Arpaio did in Arizona as Sheriff of Maricopa County was legal.   Soros sunk an astonishing $2.3 million into a campaign aimed at defeating Maricopa County Sheriff Joe Arpaio, according to a filed campaign finance report.

Guilty of Upholding the Law

America’s Sheriff, Joe Arpaio was found guilty of misdemeanor criminal contempt without the benefit of a jury of his peers by guess who?

The guilty ruling, by Clinton appointed U.S. District Judge Susan Bolton is the latest chapter of a nearly decade-long saga of legal proceedings against Sheriff Joe initiated by leftist groups opposed to his aggressive policing of illegal aliens. The 85-year-old Arpaio should never have been charged, and thankfully our President pardoned him for good reason.

The charges against Arpaio stem from a civil rights suit demanding he cease “racial profiling” in his Maricopa County Sheriff’s Office’s immigration enforcement operations. After a federal judge issued an order demanding certain practices, Arpaio was charged with contempt for continuing to try to enforce the law as he saw fit.  Link

Racial profiling is used against the sheriff because Arpaio went after illegal aliens, most of whom were Hispanics. 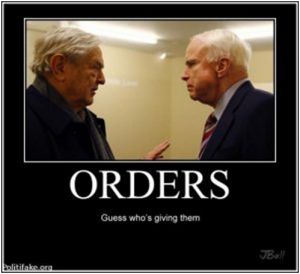 McCain’s hypocrisy in damning Trump’s pardon of Sheriff Joe smells to high heaven. The Arizona Senator was among the most vocal critics. “Trump pardoning the sheriff ‘undermines his claim for the respect of rule of law,’ McCain tweeted.”  What hogwash!

Remember, back in 2008, Jerome Corsi reported that McCain had been funded by Soros since 2001, and Soros was behind the removal of Sheriff Arpaio.  We also know quite a bit about McCain’s past, which is a far bigger scandal than anything America’s favorite Sheriff has ever done.  Let’s look again at McCain’s history.

As a former Viet Nam POW, we know that McCain recorded a Tokyo Rose-style propaganda message that was broadcast on North Vietnamese radio in 1969. It was hardly a secret in veterans’ circles that McCain had spent much of the war producing Communist propaganda broadcasts since these had regularly been played in the prisoner camps as a means of breaking the spirits of those American POWs who resisted collaboration.

But there is a far bigger scandal, which I touched on in a previous article.

Sidney Schanberg’s massively documented expose about McCain’s role in the POW/MIA cover up, is the greater scandal.  Schanberg is one of America’s greatest wartime journalists, a Pulitzer Prize winning former top editor at The New York Times. In the years since then, other leading journalists have praised Schanberg’s remarkable research, now giving his conclusions the combined backing of four New York Times Pulitzer Prizes, while two former Republican Congressmen who had served on the Intelligence Committee have also strongly corroborated his account.

McCain fought against the release of classified Vietnam POW records and insisted they be sealed.  He and John Kerry buried the evidence. He also voted against a Senate Select Committee recommendation to investigate possible POWs left behind that were classified as MIAs.

McCain purposely suppressed information about what happened to American soldiers missing in action in Vietnam.  Throughout his Senate career, McCain has quietly sponsored and pushed into federal law a set of prohibitions that keep the most revealing information about these men buried as classified documents. Thus, the war hero who people would logically imagine as a determined crusader for the interests of POWs and their families became instead the strange champion of hiding the evidence and closing the books, most likely to protect himself.

In 1993 the front page of the New York Times broke the story that a Politburo transcript found in the Kremlin archives fully confirmed the existence of the additional POWs, and when interviewed on the PBS News hour former National Security Advisors Henry Kissinger and Zbigniew Brzezinski admitted that the document was very likely correct and that hundreds of America’s Vietnam POWs had indeed been left behind. The reality of Schanberg’s POW story is now about as solidly established as anything can be that has not yet received an official blessing from the American mainstream media.

McCain also had his POW records sealed, which is not consistent with someone proud of their record. 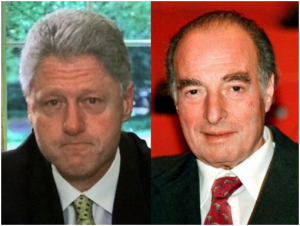 The very same Republicans, Democrats and media who are excoriating Trump’s pardon of Arpaio never batted an eye at the fact that former President Obama commuted the sentences of over 1000 people in jail for drug crimes.

In addition, the same politicians never expressed a hint of disapproval at the fact that Obama pardoned 74-year-old Oscar Lopez Rivera — a radical Marxist responsible for an era of domestic terrorism in Puerto Rico, hundreds of bombings, and a massive attempt to overthrow the government (“seditious conspiracy”).

And what about Obama’s commutation of Bradley Manning who was convicted of violating the Espionage Act, stealing government property, violation of the Computer Fraud and Abuse Act, and multiple counts of disobeying orders.

Born Bradley Manning, Obama likely commuted his sentence because of his sexual identity confusion as a statement and a slap in the face to the religious right.  Manning now calls himself “Chelsea” Manning.

Barbara Olson wrote the premier book on Bill Clinton’s pardons of cronies and friends when he left office.  Her book, “The Final Days: The Last, Desperate Abuses of Power by the Clinton White House,” exposes a true abuse of power by an American President.

Rich was on the FBI’s most wanted list and was facing prosecution by Rudy Giuliani in 1983, when he fled to Switzerland and lived in exile.

The outrageous Marc Rich pardon is still paying off.  Rich’s ex-wife Denise donated $450,000 to the fledgling Clinton Library and “over $1 million to Democratic campaigns in the Clinton era.”  The flow of funds from those connected to Marc Rich or the pardon scandal have continued to the Clintons.

Rich died in 2013. But his business partners, lawyers, advisors and friends have showered millions of dollars on the Clintons in the decade and a half following the scandal, a scandal even Barney Frank and Obama found appalling.

The Republican hatred of our President is unparalleled in American history, and their hypocrisy should be obvious to the American electorate.

P.S. Again I come to all the avid readers of NewsWithViews and ask you for support.  Running a website this large is a huge operation and a huge monetary cost.  Please help us to keep bringing the truth into your home every morning.  Won’t you add NWVs to your monthly donations, every little bit helps this website stay alive.  You can donate here.