Today, Seth Borenstein, AP Science Writer, produced another irrational attack on climate truth. He references a prediction in the 2012 special report by the Intergovernmental Panel on Climate Change (IPCC),

Then, he presents the usual extensive list of weather-caused damages since 2012.

He says this IPCC report is the warning and forecast “by top United Nations climate scientists more than 10 years ago.”

“The report was clairvoyant. The report was exactly what a climate report should do: Warn us about the future in time for us to adapt before the worst stuff happens.”

But Borenstein and Oppenheimer go off the scientific cliff by concluding these IPCC predicted damages prove that our CO2 emissions caused these damages.

The only thing Borenstein has proved is that he and scientists parked in universities around the world do not understand the logic of science and boastfully announce conclusions that are illogical, irrational, and unethical.

Events do not prove their cause.

The most important principle in science is ironically one of the simplest.

Only true science can find the cause.

The IPCC claims these three (false) theories are true:

You didn’t know it was this simple, did you? 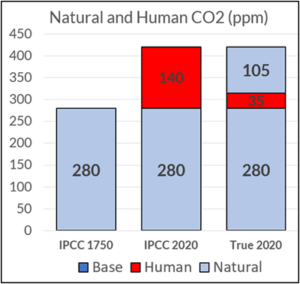 Let’s look at the big picture of climate alarmism.

This figure shows the three scenarios for Natural and Human CO2.

The first bar is the IPCC version for 1750. Here, the natural CO2 level is at 280 ppm. It is at equilibrium, which means the CO2 outflow equals the CO2 inflow.

The second bar is the IPCC version for about 2020. Here, the IPCC assigns all the CO2 increase to Human CO2. All climate alarmism is based on this bar.

The third bar is what the IPCC data show (Berry, 2021). Here, the Human addition is only 35 ppm. This means Natural CO2 caused about 75% of the CO2 increase. The third bar is climate truth according to IPCC’s own data.

Berry (2021) proves the second bar is false, PCC’s theory (1) is false, and the climate claims by Borenstein and Oppenheimer are science fiction. It is simple and can prove in a court of law that climate alarmism is based on false science.

Other scientists have proved IPCC’s theories (2) and (3) are wrong. There is no scientific basis to support the claim that human CO2 causes dangerous climate change.

The threat of the climate fraud is the Great Reset.

The Great Reset depends on the climate fraud and its climate laws and regulations. The only way to stop the Great Reset is to undermine its Democrat-supported climate foundation by voting Republican in the 2022 election.

The Great Reset, if achieved, will impose a world government with a two-tiered economy where the superrich will control their profitable monopoly and everyone else will live as a serf in perpetual socialism.

They will control the miseducation and medication of your next generation so they will never again regain the power to be free.

Will the Republican Party support climate truth in time to win in 2022?

Climate change is the most divisive, misunderstood, critical issue in the 2022 election

Climate truth is the core Republican issue because it affects the supply and cost of our energy and food, and negatively affects our education, economy, taxes, and freedom. The climate fraud encourages citizens to believe other government lies.

America’s only hope is that the Republican Party will support climate truth. The absence of a Republican challenge has allowed the Democrats to gain voters on the climate issue.

President Trump is no longer president because, in addition to the election fraud, he lost his climate debate against Biden. His debate loss disillusioned voters who were waiting for him to prove Biden is wrong about climate.

The Message is more important than money.

Now, in mid-September 2022, the November election does not look good for Republicans.

Republican candidates say they are losing the election because the Democrats have more money. While money is necessary, today’s business advertising proves a better message can beat money every time.

This Republican climate message will get free publicity because it is controversial:

Our national energy plan should include:

Our national CO2 plan should include:

Carbon capture may be the most insane and counter-productive peacetime undertaking in human history.

Stop net zero politics. Netzeroclimate.org says, “Net zero refers to a state in which greenhouse gases going into the atmosphere are balanced by removal from the atmosphere.”

Sixteen Republican candidates (85%) agreed with the Democrats on climate change. They did not read Berry’s book, Climate Miracle.

If they win their climate lawsuits in Montana, Democrats will control Montana’s mining, energy, and economy. They will shut down Montana’s hydrocarbon energy try to power Montana with wind energy.

In 2011, Dr. Berry filed an Intervention to a Democrat climate petition in Montana’s Supreme Court. His Intervention caused the Court to reject the petition, thereby saving Montana billions of dollars per year thereafter and making him the only scientist to defeat a climate lawsuit. The Montana Supreme Court ruled,

“If they cannot prove a connection between eliminating Montana’s minute carbon emissions, and reducing the pace of global climate change, then public trust doctrine cannot, even under their own flawed legal theory, apply.”

“This establishes once and for all, at least for Montana law, that climate science is decidedly not settled.”

Beginning in 2020, environmental groups have filed more climate lawsuits against the State of Montana. One of these new lawsuits, Held v. Montana, is a carbon copy of their 2011 petition to the Supreme Court that Dr. Berry defeated in 2011. Montana has refused Dr. Berry’s offer to help Montana defeat Held v Montana.

How to stop a climate lawsuit.

Montana’s defense attorney for Held v Montana thinks they must defend against the plaintiffs’ direct claims.

Dr. Berry disagrees. He believes the best way to defend against climate lawsuits is to prove the plaintiffs’ assumptions are wrong, as he did in 2011.

According to Dr. Berry, all climate lawsuits assume the above three IPCC theories are true. The best way to win the defense is to defeat theories (1) and (2). Dr. Berry says his Climate Team 6 can take out these three invalid climate theories in court and thereby stop all Democrat climate lawsuits.

As a bonus, defeating these Democrat climate assumptions in court will change America’s education and politics.

Montana’s defense should use the 2011 Montana Supreme Court precedent that climate science is “not settled.” This would put the burden of proof on the plaintiffs to defend the science behind their lawsuit.

The defense should include the reasons the 2011 plaintiffs filed their petition in the Montana’s Supreme Court rather than in a lower court. They claimed an irreversible climate change event would occur before they could go from a lower court to the Supreme Court and stop Montana’s CO2 emissions in time to save the planet. Now 10 years later, it is obvious that no such damage has occurred.

The scientific method says if your prediction is wrong then your theory is wrong. This proves the scientific basis of the Democrats’ 2022 climate lawsuits is wrong.

Republicans must lead a new revolution against the climate fraud.

Putin’s closure of his gas pipeline to Europe should be our wakeup call. Europe quickly cast aside its green idealism for carbon fuels and nuclear energy. Solar and wind have proved they cannot support a free industrial society.

Now is the perfect time for Republicans to promote climate truth because people want to stay warm this winter and want to keep the costs of energy, travel, and food low.

If Republicans accept this challenge, they will win in November 2022 and change the world.