During his June 2015 presidential announcement speech, Mr. Trump said, “But Obamacare kicks in in 2016. Really big league. It is going to be amazingly destructive. Doctors are quitting. I have a friend who’s a doctor, and he said to me the other day, ‘Donald, I never saw anything like it. I have more accountants than I have nurses.’ It’s a disaster. My patients are beside themselves. They had a plan that was good. They have no plan now.” 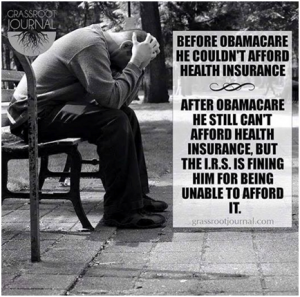 Yes, doctors are quitting in droves. The loss of physicians right here in Knoxville at the University of Tennessee Medical Center is astounding.  They get close to retirement, I’m talking 55 to 60, and say, “I’ve had enough, I’m outta here.”  The loss is astronomical.

Prior to Obamacare, people were still complaining about health insurance and its costs, mostly because of bills passed by Congress that allowed illegals to freely gain healthcare in the US without insurance, and working Americans’ costs rose. But back then, 25 and 30 years ago, people had jobs and they had discretional income, and many of them had health insurance through work.

Perhaps 20 or 30 million folks didn’t have insurance and for that Obama and gang threw out what worked and came up with this unaffordable monstrosity in the name of “compassion” to insure the 30 million who weren’t insured.

Most young people in their 20s and 30s don’t care about insurance, they’re healthy.  That’s a lot of people who’ve now been forced to buy or pay penalties.  Totally unconstitutional.  Even those who didn’t have insurance were never turned away in an emergency.  Bottom line, this is all about control and wealth redistribution.

President Trump said, “I am not going to own this sucker. It isn’t mine. I had nothing to do with it. I’ve engaged in good-faith efforts to fix this and people aren’t interested. So, fine. If you’re not interested establishment, you live with the results.” [Link] He’s not going to own it.  Watch this one-minute video from our President.

Oh yes, Republicans all voted against Obamacare in 2010, but now they can’t come to an agreement on Repeal and Replace, so what does McConnell decide? To finally allow a total repeal vote like they’ve had six times before.  And now they’ve proven they don’t want to really repeal it.  It’s all been smoke and mirrors over the last seven years to fool the electorate into re-electing them.

Guess who the Senators are who would vote against the total repeal…Shelley Capito of WV, Lisa Murkowski of AK, and Susan Collins of ME. These women should have a “D” behind their names, and remember, most of these same Republicans failed to defund this unconstitutional filth when they had the chance. [Link]

The Republicans promised to repeal Obamacare if they were given the House, then given the Senate, then given the White House. They have all three and they’re not repealing squat in Obamacare. Do these left leaning Repubs know what is going to become of their party if they refuse to comply with the President’s promises to the American people?

Donald Trump has had enough, and I don’t blame him.  As a show of good faith, he tried to work with the Republicans to Repeal and Replace, although all of us just want the horrid piece of trash repealed, and they’ve failed, not once, but twice.  Now Trump is saying he is going to just let Obamacare fail, and he’s sure as hell not going to own it…which he’s also been saying for months.  Let the radical leftist Democrats absorb all the blame, along with Obama…just let the thing crash and burn. [Link]

The Democrats are responsible and deserve the blame.  No one would work with Trump in the Republican Congress, so it’s time to let Obama’s so-called “legacy” implode.  Oh yes, they’ll try to blame Trump.  Democrat Steny Hoyer is already saying, Trump, you have to do something to save Obamacare.  Hogwash!  The thing is an albatross, let it flounder and die.  And Dems, you’re the ones who passed this garbage, so own it. 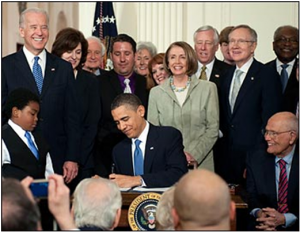 I remember Pelosi saying, “Affordable healthcare for all Americans!”  “We have to pass it to see what’s in it.”  They sang the praises of Obamacare and everything was so wonderful.  Affordable for all, insuring everyone, keep your doc, keep your plan…all bull dung, and they knew it.  They knew it was going to implode and they wanted single payer all along.  What screwed them out of that single payer goal was the fact that Hillary Clinton lost the election!

Look at all those smiling gleeful radical lefties who knowingly trashed individual freedoms granted by God in our Constitution!  It was Vladimir Lenin who said, “Socialized medicine is the keystone to the arch of the socialist state.”

When taxpaying Americans opposed this unconstitutional monstrosity and screamed about it, they couldn’t understand what the problem was!  Of course not, the leftist dingbats in the Democratic party have their own Cadillac policies, and they live in their own little lobbyist funded bubble.

It was those very taxpayers who were sick of the redistribution of wealth forced on us by this Obamacare debacle who elected Trump.  Our costs went up, and illegal aliens received free care.

Thirty-Four Dems Voted Against the ACA

In 2009, 34 House Democrats voted against the Affordable Care Act. Many came from red or purple states—Texas, Tennessee, Ohio—and identified themselves as part of the moderate-to-conservative “Blue Dog” coalition. (No Senate Dems voted against the bill.)

Now only four of those democrats are still in Congress, 30 of them are gone.  Reps. Collin Peterson of Minnesota, Stephen Lynch of Massachusetts and Dan Lipinski of Illinois were among the 34 House Democrats who voted against the Affordable Care Act in 2010.

Lipinski said even though he has publicly criticized problems with Obamacare, he has never voted in favor of repeal measures the GOP has brought to the House floor in recent years.

“We can’t throw it all out,” Lipinski said. “Let’s fix it so it works.” (Sorry Lipinski, it isn’t ever going to work.)

Lynch and Peterson have both called for repairing the law, although Peterson last year was the sole Democrat to vote yes on a GOP bill to repeal Obamacare and defund Planned Parenthood. Peterson told Minnesota Public Radio later that “what we should be doing is working to fix it.”  (Sorry but there isn’t a fix, it needs to be dumped and let the free market work.)

All three have criticized Obamacare, which has resulted in premium spikes, high deductibles and vanishing health insurance markets, but they are not rallying behind the Republican proposals, and neither are they rallying behind total repeal.

As Huey Long said so long ago, “The only difference between the Democratic Leadership and the Republican Leadership is that one of them was skinning from the ankle up, and the other from the ear down.”

Our President has tried to work with these people, but the Republicans in Congress lean more to the left than to the right.  Unfortunately, it is the American people who will suffer.

Yes, Obamacare will implode, but Mr. President, Illegitimi non carborundum…Don’t let the bastards grind you down.