Despite his predecessors, President Trump is very serious in his efforts to squeeze Iran’s economy as much and as fast as possible. Trump intends to make the Islamic regime fall on its own via crippling sanctions. Iranians are swarming for U.S. dollars as Iran’s currency, the rial, plunges to historic lows amid economic and political uncertainty. Iranian currency, the rial has lost one-third of its value this year alone and is now 60,000 to the dollar. That number is a lot higher in the black market.

During the campaign, Trump promised, he would withdraw from the 2015 Iran nuclear deal Obama orchestrated. Trump unwillingly stuck with it for a number of months longer than he wished while Rex Tillerson was Secretary of State, but once Tillerson was moved and replaced by Mike Pompeo, and joined by another anti-Islamic regime expert, National Security advisor, John Bolton. The A team was created.

So, let’s be clear: The new strategy Pompeo laid out is the same as the old strategy — the US plans to impose maximum pressure on Iran to force it to change. (That’s similar to Trump’s strategy toward North Korea, by the way.)

Global oil supply chain easily can handle the loss of 500,000 bpd of Iranian crude, although we may 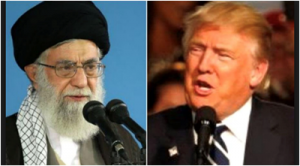 notice some higher prices at the pumps. While both India and China have the scope to lower their imports from Iran, they will possibly be reluctant, especially given the ongoing quarrel over pricing between China’s top refiner Sinopec and Saudi Arabia.

It is becoming quite clear that President Trump’s decision to depart from the Iran nuclear deal was just the first step in the White House’s plan of action towards the regime in Tehran. The administration is engaging all of America’s instruments of national power to isolate and defang the mullahs.

European allies, and even America’s adversaries, appear to be following an aggressive U.S. policy against the Iranian regime, which is backed by sanctions intended to cut off Tehran from the global trade market.

On May 8, 2018, President Trump stated: “The Iranian regime is the leading state sponsor of terror.  It exports dangerous missiles, fuels conflicts across the Middle East, and supports terrorist proxies and militias such as Hezbollah, Hamas, the Taliban, and al Qaeda. Over the years, Iran and its proxies have bombed American embassies and military installations, murdered hundreds of American service members, and kidnapped, imprisoned, and tortured American citizens.  The Iranian regime has funded its long reign of chaos and terror by plundering the wealth of its own people.”

He continued, “while the deal itself contains no provisions for withdrawal, Iran has threatened to reactivate its nuclear program if the United States reneges on any of its obligations under the pact’s terms.”

France and Germany, whose leaders visited Washington, D.C., in recent weeks to appeal to Trump, have warned that nullification of the agreement could lead to all-out war in the Middle East. Former British Foreign Secretary Boris Johnson who recently resigned, said that as far as he knows, the administration has no clear “Plan B” for what to do next.

Meanwhile, the Trump administration isn’t looking to invade and occupy Iran, but it does have a fairly clear goal of regime change. I have no doubt about it. Pompeo, National Security Adviser John Bolton, and other key figures in Trump’s circle, including key Republicans in Congress, are open advocates of overthrowing the Islamic Republic and its ruler, Ayatollah Ali Khamenei as are millions of Iranians.

It does also appear that the Iranian regime is facing serious setbacks in Lebanon, in the Palestinian territory, in Syria, and even in Iraq.  The mullahs’ attempt to seize power in Lebanon has provoked much of the Lebanese population against them, and their proxy, Lebanon’s Hezb’allah, is in a state of frenzy.  The Iraqi thug-cleric Muqtada al-Sadr and his Mahdi Army, the mullahs’ mercenary force, face serious problems due to the pressures from the U.S. and the Iraqi government.

After years of using its proxies and interfering in the reginal countries, the Islamic Republic now finds itself isolated and has decided not to carry out its threat of suspending relations with countries that voted in support of the U.N. sanctions.

We should keep this in mind, before we get involved in Iran, we must declare unequivocally the commitment to respect the territorial integrity of Iran, as well as the rights of Iranians to decide, through democratic processes, all matters pertaining to their lives and their country.