“Experience hath shewn, that even under the best forms of government those entrusted with power have, in time, and by slow operations, perverted it into tyranny.”  —Thomas Jefferson

While trying to come up with a subject for our weekly column, America’s immigration dilemma started doing ever-tightening circles in our mind.  It is a dilemma that has been coming at legal Americans like a slow-moving freight train for several decades and it now may have reached the point where it cannot be fixed politically.  The illegal immigration freight train has become a run-away!

Because of this situation, and out of building frustration and outright anger, we began a title to our next article with: “If Government Won’t Deport Illegals, Then Legal Americans Must.”  But of course if we followed through with that title and wrote an article around it, we would be guilty of advocating violence or vigilantism.  That’s how far our frustration went until logic and reason took over and we realized why illegal immigration can’t be fixed under the current system.  It’s because representative government is hopelessly divided and most likely, forever broken without massive intervention by the people.

Americans, well at least some Americans, cling to representative government and a Constitutional 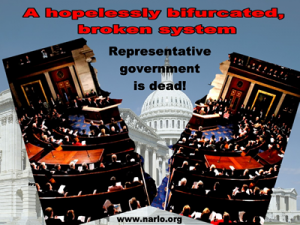 Republic out of a perception that the vision of our Founding Fathers will be forever enshrined in the annals of politics and the halls of government.  That would be true except for the human failings of greed, lust and power that build up over time when left unattended.  The Founding Fathers warned us that government could eventually evolve into political favors, bribery, pay offs, double dealing, corruption, collusion, conspiracy and racketeering ….. if the people let it.  The sad reality is, we have.  Some of the people are trying to undo the government cabal, while millions of other Americans like it just the way it is, because they are freely profiting from our increasingly corrupt, unconstitutional system.

Representative government has failed on all accounts, mostly due to two observable conditions.  The first condition is the apathy of the American people and the second condition is the ever-widening gap between two vastly different and opposing ideologies.   One ideology is fixed on the idea that society slowly evolves away from individual independence, constitutional unalienable rights and self-reliance due to rising human densities, to a culture that is heavily dependent on government and government services.  The other ideology is the direct opposite of the former.  A compromise, or co-existence, between the two ideologies has most likely evaporated into thin air because too many Americans have been bought off with promises of “free” stuff by one of those ideologies.

Since the people aren’t paying much attention to what the government representatives are doing, as respects their freedom and natural rights, those representatives are free to do pretty much whatever they want to do.  The representatives can enrich themselves at the expense of the masses.  They can buy more votes with your money.  They can join the world elite in establishing world government.  They can open the flood gates to illegal immigration for ulterior motives ….. you know, like votes.  And they can increase their power over the American people by passing highly restrictive laws for a million different reasons, all of which are supposed to benefit the masses (or the planet), but don’t.

All common sense political fixes to the problems facing Americans never materialize in America’s representative government.   The divisions between the two parties (ideologies), produces either no legislation, or partisan legislation that contains meaningless compromises that lead to conflicts and loopholes over which lawyers can argue over for decades and that is if they can even come to a compromise.

Alarmingly, our representative government (RG) “system” has morphed into an intertwined entanglement of a corrupt, interlocking national and international interests of commerce, finance, trade and labor, accompanied by government enablers of the RG “system” in the executive, judicial and legislative branches.  The tentacles of one interest are inextricably interwoven into the tentacles of all the other interests.  Finding out what drives one, leads to a complex maze of closed doors, backrooms, and secret meetings.  All the sources are purposely hidden and camouflaged.  Traces to find the truth go down dead end paths, or are blocked by impenetrable obstacles.  Sources of the RG “system’s” power are elusive and they are anything but constitutional.  The RG “system” exists because of citizen apathy and survives, thrives and grows on the people’s money, driven by the special interest elite.

Special interests, including internationalists, corporations, unions, socialists and environmentalists, drive federal, state and local governments.  They are a viral infection in the RG “system.”  Corrupt politicians whose only priority is to get elected or re-elected, drive the legislative branch of government and are part of the RG “system.”  Even the “good” representatives, if that is not a contradiction of terms, will eventually be sucked into the RG “system”.

The RG “system” has produced the likes of international mobsters Bill and Hillary Clinton.  It has spawned corruption that was recently exposed in the Department of Justice and the FBI under the leaderships of James Comey, Robert Mueller, Andrew McCabe, Bruce Ohr, Peter Strzok, Lisa Page and many more.

The RG “system” gave us a ridiculously expensive judicial system that is far removed from the common law of the people and constitutional protections.  The RG “system” repealed our citizen grand jury mechanism for holding government accountable by the people.

The RG “system” gave us radical environmentalism that tells man he is a virus on the earth and must be heavily taxed and regulated and freedoms denied.  The RG “system” gave us social justice, a liberal ideology that promotes and supports only the collective, never the individual or individual rights.  Under these conditions the U. S. Constitution has become virtually meaningless.

Our representative government “system” gave us the entrenched establishment and the deep state.  The RG “system” gave us an insane immigration policy that directly benefits one of the two opposing ideologies and is a huge financial drag on the rest of us.

The RG “system” gave us a government-run health care bureaucracy that is expensive, inefficient, cumbersome and generally corrupt.  The people never really benefit from the new policies and are only more taxed by them, while they continue to lose more of their freedoms.

But then we aren’t telling you anything new.  For twelve years now we, along with many other patriots, have pointed out the flaws in our representative form of government and we get positive responses rewarding our efforts and telling us to keep up the “good work.”  But then, when we mention possible “fixes” to those flaws, we hear a deafening silence.  The “fixes” evade us because instinctively we know that those “fixes” will upset our status quo to which we have all adapted.  We have effectively adapted to government tyranny knowing full well that to override government tyranny will take immense sacrifices, sacrifices we are not willing to make.  The German people “adapted” to the rising tyranny of Hitler and the Third Reich.

Many have been duped into believing that the rise of a Donald Trump presidency will save our Republic.  But all the Trump Administration and Congress did was to “so benevolently” give us some of our own money back, open up some more jobs, reduce some regulations and put more food on our tables.  The People didn’t do it.  The government did it.  We the People OWE the government for our prosperity.  That “ain’t” freedom folks.

The government knows full well that a full belly stops all kinds of complaints and gripes about government tyranny and adds up to votes for the providers.  Keep ’em fat, dumb and happy and the masses will be less likely to jump on the government’s case.

“Oh what fools we mortals be, when we believe that government cares for you and me.”

For four thousand years or more, the people have been adapting to slowly evolving tyranny.  When it explodes in their faces and the chains wrap around their wrists and ankles and the jail door slams shut, or before a noose snaps their neck, they then yell, “give me freedom.”  But alas, by then, it is too late.

We close with this admonition.  Some citizens that are frustrated with the unreasonable and in some cases treasonable actions of government will resort to violence to relieve their pent up anger and frustration.  No matter how much the politicians shield themselves with a huge police presence at government meetings and conferences, or when they are alone out in the community, some Americans will resort to violence against those they think are responsible for their grief and frustration and will find a way to deliver that violence.  Incidences of violence will grow as the noose of tyranny tightens.  Being a politician will eventually become extremely hazardous, unless politicians wise up and return to the principles of freedom and liberty laid down for us by our Founding Fathers and paid for by the blood of countless brave men and women that have gone before us.  NEVERTHLESS, IN NO WAY ARE WE CONDONING THIS TYPE OF VIOLENCE.

If you squeeze a ripe tomato too hard, it will ooze out between your fingers.  If you squeeze Americans too hard, unintended and sometimes violent consequences will be the result.  It is an inescapable fact which way too many of us ignore.

Thomas Jefferson wrote: “What more is necessary to make us a happy and a prosperous people?…a wise and frugal Government, which shall restrain men from injuring one another, shall leave them otherwise free to regulate their own pursuits of industry and improvement, and shall not take from the mouth of labor the bread it has earned.  This is the sum of good government.”

Anyone who is paying attention knows for sure that the government described by Jefferson is not the government that exists today.  Our representative form of government is essentially dead but we just can’t wrap our heads around it!  We now live in an “Establishment run” oligarchy that robs us blind ….. for our own “good.”

To the victor goes the spoils and WE THE PEOPLE are not the victors.

So you see ladies and gentlemen, the first title to this article may have been more right than the second and the last, final and only solution to government tyranny is …….