Is The Maurice Strong Davos Secret Society Out To Destroy Donald Trump’s Administration?

Well, not quite.  Both Trump and Mueller were Davos attendees.  Mueller’s was definitely more downplayed.  Clearly from publicity surrounding the closed crowd Davos events, Mueller was the more favored participant of the two.

Global governance is and always has been the main game of the Davos crowd and its organizing body, WORLD ECONOMIC FORUM.  Donald Trump has been perceived as doing much in his power to shut down global governance – climate control measures and all.   The Davos crowd of politicians, high financiers, “scholars” and industrialists viewed Trump with neither affection nor favor. 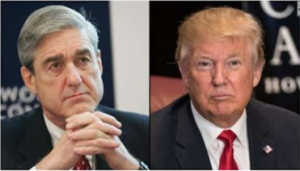 One short week after Trump’s return from Davos, Switzerland and only two days after his State of the Union address,  the New York Stock Market would drop by an astounding 666 points!  That was a number obviously chilling to millions,  including but not limited to Donald Trump’s Evangelical base of support in the USA.  This happened only two days after Trump’s triumphant State of the Union speech to the United States Congress.  A pivotal point of his speech was the dramatic improvement in the USA economy after his November 8, 2016 election.  The 666 droppage would double immediately after the weekend on the following Monday by upwards of another 1200 points in one day.

In 1990, two years before the 1992 Rio Earth Summit event, Maurice Strong publicly fantasized to a Canadian Globe reporter about a novel he considered writing.  It would be about a secret society being formed of Davos participants.  If the wealthiest nations of the world would not sign and implement a global compact, they would decide it their duty to collapse the global economy to bring the change about.  They would have the sophistication about and access to the global levers to make it happen.

“Each year, [Strong] explains as background to… the novel’s plot, the World Economic Forum convenes in Davos, Switzerland. Over 1,000 CEO’s, prime ministers, finance ministers, and leading academics gather in February to attend meetings and set economic agendas for the year ahead. With this as a setting, he then says: ‘What if a small group of these world leaders were to conclude that the principle risk to the earth comes from the actions of the rich countries? …In order to save the planet, the group decides: Isn’t the only hope for the planet that the industrialized civilizations collapse? Isn’t it our responsibility to bring this about?’

“‘This group of world leaders,’ he continues, ‘forms a secret society to bring about an economic collapse. It’s February. They’re all at Davos. These aren’t terrorists. They’re world leaders. They have positioned themselves in the world’s commodities and stock markets. They’ve engineered, using their access to stock markets and computers and gold supplies, a panic.

The reporter listened to this as Maurice Strong was driving him to the airport.  The Canadian Globe reporteor had interviewed Strong at his Baca Grande compound in Colorado, USA.  The reporter was chilled – this was not just anybody saying this.   The words he had just heard had come from the mouth of the man with the power to make it happen – Maurice Strong.

Maurice Strong is now dead and gone.  He left the world in the fall of 2015.  But his Davos influences clearly live on.    And his fantasized allies are clearly strong presences at Davos, including the World Economic Foundation founder himself, German Klaus Schwab.

The 2018 Davos World Economic Forum was in late January – not February.  Davos 2018 opened on January 23rd and lasted for 4 days through January 27th.  President Trump’s State of the Union message was delivered on January 30th.  Only two days later, February 1st, the Stock Market would fall precisely 666 points.

I’ve looked at organizations with occult agendas long enough to know that they often communicate with winks this way.  People possessing the levers to manipulate financial markets can do so with obvious numeric precision.  It is my opinion that a strong and mocking message was being sent to the Trump administration and to those both hoping for and fighting against “Global Governance,” i.e. global control.

“. . . He deeply incorporated the World Economic Forum’s mission of improving the state of the world into everything he did. He was a great visionary, always ahead of our times in his thinking. He was my mentor since the creation of the Forum: a great friend; an indispensable advisor; and, for many years, a member of our Foundation Board. Without him, the Forum would not have achieved its present significance . . . . ”

The ability of Maurice Strong and the World Economic Forum Davos participants to change the world by pulling its financial levers clearly lives on.  It is my belief that the sudden financial reversal taking place only two days after Donald Trump’s State of the Union address and only one week after the conclusion of the Davos WEF forum was a strong message that they do what they want when they want.  As the annual Davos participants were gathering, the London Financial Times opined the prevailing sentiment of those about to gather:  that globalization would proceed despite Trump administration opposition.

Knowing that Robert Mueller was present at the Davos events and rubbing elbows with those of like mind with Maurice Strong’s still living and active confederates does little to reassure me that his (Mueller’s) intentions are American only driven pure and honorable.  The Davos dream was Global Governance shaped for the convenience of the various Davos stakeholders.  Trump’s dream was less global governance, more “America First.”  These were colliding world views and the Davos crowd assumed they were playing for keeps.  Not just anybody can go to Davos conferences – it is a tightly controlled event.  Robert Mueller was clearly invited.  For what purpose?

We know now from advance reports on James Comey’s new book that he considered politics in his actions before the Election.  It is not unreasonable to assume that his marching buddy, Robert Mueller might well be doing so as well.  Were Maurice Strong’s fantasies at least partially acted upon post Davos 2018?   Was or is there a Davos “secret society.”  If so, did they invite Robert Mueller to help further their agenda?

I have my strong suspicions.  I hope I’m wrong, but I suspect I’m not.  Donald Trump, Brexit, “populism” are all being used as strong rationales for “global governance now.”  All were topics of deep discussion at the 2018 Davos conference.   The worst may well be happening – now.  But now, that’s a “conspiracy theory” isn’t it?  A “conspiracy theory” perhaps arising from the grave of Maurice Strong and his real life confederates themselves.