“America is the only nation in the world based on an idea – freedom and self-government – so if we don’t understand that idea and what sacrifices were made to win that freedom and keep it for over two centuries, how can we possibly continue to keep it?” —Eric Metaxas, a contemporary American author, speaker, and radio host.

Duty, honor, Country, the creed of the U. S. Soldier, a creed not lost in the Army, but pretty much devoid in the general population.  General Douglas MacArthur described these words in a speech he gave on May 12, 1962:

“These sacred words build your basic character. They mold you for your future roles as the custodians of the nation’s defense. They make you strong enough to know when you are weak, and brave enough to face yourself when you are afraid.”

“They teach you to be proud and unbending in honest failure, but humble and gentle in success; not to substitute words for action; not to seek the path of comfort, but to face the stress and spur of difficulty and challenge; to learn to stand up in the storm, but to have compassion on those who fall; to master yourself before you seek to master others; to have a heart that is clean, a goal that is high; to learn to laugh, yet never forget how to weep; to reach into the future, yet never neglect the past; to be serious, yet never take yourself too seriously; to be modest so that you will remember the simplicity of true greatness, the open mind of true wisdom, the meekness of true strength.” 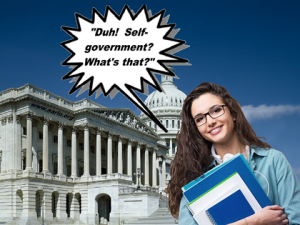 “They give you a temper of the will, a quality of the imagination, a vigor of the emotions, a freshness of the deep springs of life, a temperamental predominance of courage over timidity, an appetite for adventure over love of ease.  They create in your heart the sense of wonder, the unfailing hope of what next, and the joy and inspiration of life.”

The U. S. Marines have a similar creed described by the three words, honor, courage and commitment.

Notice that “honor” is repeated in both creeds.  Without putting these words into practice, without honor in individuals and government representatives, self-government won’t work.

Instead, many Americans have replaced honor, duty, courage, commitment and country with self-gratification, self-absorption, addiction, debauchery and corruption.  Millions of Americans have become personally soft, weak and dependent on government.  They have rejected self-reliance and individual responsibility.  Self-government is the farthest thing from their minds.

There are almost 80 over-lapping government programs that provide cash, food, social services, education, training and housing for low income Americans.  Over 73,000,000 Americans are on Medicaid and Children’s Health Insurance Programs.  Over 55,000,000 seniors are on Social Security and Medicare.  Over 40,000,000 are on food stamps.  On any given night, well over 500,000 Americans are hopelessly locked in homelessness in one of the wealthiest nations on the planet.  The lion’s share of homeless Americans survive in the states of Washington, Oregon, California and Nevada.  It is of note that all four states are run by Democrats.

Any American that is receiving subsistence from government, in any form, can no longer be a free and impartial voter, owing his or her very existence to government.  A person on welfare will not vote for anything that reduces that welfare and in fact will riot in the streets to maintain their largess.  A senior citizen on Social Security and Medicare will not vote for any politician or initiative that could or would decrease their benefits.  If the government promises and then provides free college tuition to students and then later decides it can no longer afford free college tuition and decides to cut back the programs, campuses across the nation will erupt in violence.

Look at France right now as the government tries to reduce its complicated retirement benefits.  To buy the votes of the people, the French government promised too much and now revenues will not cover retirement expenditures.  Government has no choice but to reduce those benefits, or raise taxes.  The people have taken to the streets in violent protest of the government’s action.  The trains have stopped and schools have closed.

There is an irrevocable adage that most governments refuse to acknowledge.

“Once government has promised something to the people, government can’t take it away without triggering massive protests, even if there is no more money to cover the promise.”

But there is another factor that works against self-government.  Modern life has become so complicated and the people so divided on issues, Americans either take the easy way out and do nothing, or continue to elect the same people over and over again where the divisions and complications rise and any reasonable or common-sense fix is out of reach.  The problems remain and the national deficit and debt goes higher and higher.

Issues like immigration, agriculture, the environment, transportation, trade, infrastructure, health care, education and foreign policy have become so complicated, convoluted and divisive, people just tune out.  The people don’t know who to believe, or whose telling the truth, or who is lying.  Government at any level is the least trustworthy.  Who can forget Obama’s infamous promises of “you can keep your doctor“, “you can keep your health care plan” and “your costs will go down by $2,500 per year.”  Every promise was a lie.

According to recent polls, millennials (23 to 38) are losing interest in patriotism, religion and having children.  If the next generation that is going to take over control of our institutions no longer considers patriotism, religion, or having children of any value, the chance to preserve individual freedom becomes less and less likely.  Government services then become the only important item in people’s lives and centralized government becomes more and more powerful.  Much of this shift in values can be placed squarely on Progressives, the public education system, academia and the media.  The parents of these millennials are also complicit.

Meanwhile, the tug of war between the two opposing ideologies, liberal and conservative, grows even more vicious and mean such that political power becomes the only end by any means, without regard for what is good for our Constitutional Republic or the American people.  This political viciousness is being played out in multiple Congressional events like the Supreme Court Justice Brett Kavanaugh confirmation hearings and the current impeachment trial of President Trump in the House and Senate.

In short, representative government has become impotent and ineffective and that is primarily because today’s American is incapable of, or unwilling to govern themselves through their representatives.  One by one, the freedoms we take for granted will be repealed and absorbed into the collective.  Local, state and the federal government will continue to invade those freedoms as fewer and fewer Americans object.  Eventually, this condition can only lead to civil war, or revolution as those Americans that wish to preserve freedom turn to the last remaining alternative to defend their liberty ….. the gun.  Watch what happens in Virginia over gun control.  It is the canary in the coal mine.

During this interim period as more and more individual freedoms are lost, the people can only hunker down and use what is left of their rights to keep the government at bay.  Nevertheless, the end of this perilous journey can only end in final subjugation and enslavement of the people of the United States, unless and until the people decide for themselves that they are capable of self-government, even if it means making the ultimate sacrifice to do it.

For those rural landowners determined to protect their land from government encroachment and environmental overreach, click HERE.