It is hard to believe that the 7th century ideology called Islam has been resurrected and with its vast and unlimited petro-dollars, infiltrated every country in the world, with the intention to dominate the world.

Islam seeks nothing less than total global domination.  The word Islam literally means “Taslim,” (submission) or just “surrender,” the kind that comes by force and fraud.  Its scripture must be taken literally; its provisions are intended to dominate every waking moment in the life of a believer.  There is no room for being a half-hearted Muslim and no toleration of watering down its invocations.

The various Muslim sects subsumed under the Sunni label constitute nearly 90% of Muslims while the total subjects forming the Shiite sect account for the remaining 10% in the world. The pure number, all things being equal, bestows greater advantages to the majority. In the case of Muslims’ heinous agenda, the religious underpinnings of the two sects may be different. Even their strategies may be different in some respects. Yet, their objective is the same: dominating the world. 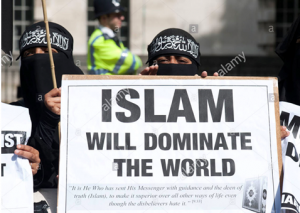 History is replete with evidence that clearly demonstrates that to Islam the ends justify the means. Hence, the two sects are at work with their own schemes, many of which they have in common.

The Sunnis not only have the advantage of numbers, they have been busy at their conquest of the West longer than the Shiites. The Sunnis have had powerful wealthy governments such as Saudi Arabia and the Emirates of the Persian Gulf directly financing and supporting the agenda.

The Sunnis and their activities are more visible in the United States. Yet the Shiites are too relentlessly pursuing their objectives in this country. From time to time we see indications of the Shiites activities, particularly since the Shiites now enjoy the active backing of the Islamic Republic of Iran.

There is ample evidence that America is under the unrelenting attack of both Sunnis and Shiites. It is disastrous to discount the threat they pose, or underestimate the danger from either sect.

The current internal infighting playing in the Islamdom is in full color – red. Both sects, indiscriminately slaughter each other as though they are pure Islam. Anyone or anything in between is subject to death.

By now, we know when the prophet Muhammad died he did not leave anything behind for his followers to follow. What the historians tell us, immediately after his death, his Islamic ideology started to divide. Islam became ‘ISLAMS’ and kept dividing up to this day.

The Islam that we know to this day is in fact generation after generation of Sunni Muftis, [highest ranking Sunni clerics]—and Ayatollahs— [highest ranking Shiite clerics], over the years have indoctrinated their underling clergy as well as the masses with selective teachings of the Quran that promote intolerance, exclusion and hostility toward non-Muslims—people labeled as heathens, infidels, unbelievers and apostates.

Choosing certain scripture in combination with a siege mentality endemic to the cradle of Islam, the Middle East, has generated a fury of hatred that has a great potential of devouring life on Earth in no time at all.

Many Islamic scholars as well as politicians in this country are hoping Muslims will come to their senses and purge the negative aspects of the Quran and practice its positive early Meccan surahs. They hopelessly wish our world would become a diverse community of humanity at peace with one another. The question is: Is that possible or are we headed for a clash of civilizations?

It is indeed sad by what is going on in this darksome world. On the one hand, all kinds of Islamic associations and groups in places such as Europe, the United States, Canada, and Australia demand not only to be treated like everyone else, which they are, but granted special privileges — such as application of Sharia law. Yet, Muslim governments — even those of relatively enlightened countries such as Turkey and Egypt, systematically discriminate against non-Muslims.

Anyone who has had the privilege to live in America, must abide by our rule of law and assimilate into our culture. If they prefer Sharia Law, then we advise them to go to those countries that practice Islamic law.

America does not need Muslim minorities and we should not grant them special privileges, or try to change our laws to fit their desires, no matter how loudly they yell ‘discrimination.’ Even if most Muslims seek to adopt an American lifestyle, a great many Muslims are dead-set on using violence to make America conform to their barbaric way of life. Islam is like cancer. Cancer cells are always few at the beginning, and if they are left unchecked, they keep on multiplying, eventually devouring the non-cancerous.

Warning: Islam is not a religion, but a political ideology which incites hate, violence, intolerance, and terror.  Islamists are terminators.  “You cannot bargain with them. You cannot reason with them.  They do not feel pity or remorse or fear.” And they absolutely will not stop, ever, until all the infidels are dead or have submitted to Islam.

The only language Muslims understand is the language of force.