Islam: The Enemy Of The US Constitution

Islam with its rule of Sharia presents an imminent threat to subvert and replace the Constitution that governs our lives.

Muslims are the only minorities in the world who will never submit to Western laws and in fact, they are the only minority who actively works around the clock to dismantle it. To Muslims, the highest US authority and document is considered a heresy. In a parallel attack, “Legal Islam “exploits every provision of the law in free societies to promote Islam and silence its critics through expensive legal shenanigans.

So, our Constitution and even State and local laws are essentially meaningless to a Muslim, and the Bill of Rights, once its usefulness as a means to perpetuate Islam in America is no longer necessary, will certainly be disparaged and ignored. 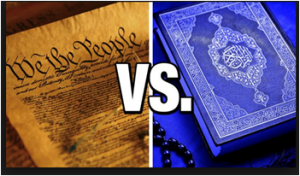 Islam not only is incompatible with the United States Constitution; it is its greatest enemy. Muslims will always consider Sharia law as the supreme law of Allah and will do anything and everything to replace our laws. Hence, it is imperative that we fight Islamofascism with the same determination that we fought other enemies of freedom such as Nazism, Fascism, and Communism. It is, therefore, imperative that the Constitution be revisited in such manner that it no longer grants a pass to any cult simply calling itself a religion. A Muslim can never ever be a Muslim and an American at the same time.

This is an admission that Islam is not just a religion.  It is a cult.  It seeks total control over a person’s mind and body.  And, as such, our Constitution is totally in contradiction with Islam.  They will push politicians for local control and self-determination of their own laws.  In this way, America will become two nations; a weakened traditional one, and a growing, menacing Islamized one.

In the interest of impartiality, the authors of the Constitution did not define what constitutes a religion. Presently, a plethora of sects, cults, orders, all claim to be a religion and cover the length and the breadth of the land. So, as long as these “religions” minister to the legitimate spiritual needs of their congregation without threatening the rights of others, there is no reason for concern. However, when one or more of these claimants strive to undermine the very Constitution that protects them in order to impose their belief and way of life, serious problems arise. 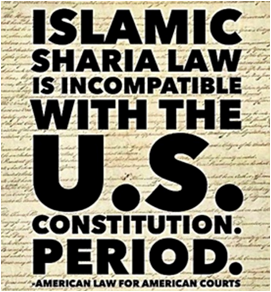 One such ideology is Islam in all its forms. Islam is more than a cult. It is an ideological superstructure encompassing all institutions, social, economic, political, military, civil, legal, educational, and even private affairs. It is of relatively recent arrival on the continent and is rapidly burgeoning in both numbers and influence. Therefore, it is imprudent to ignore the threat it poses to the larger religious and secular communities.

Can a religion or a cult become so powerful and so uncivilized that it can hide behind the Constitution to preach an ideology of hatred and advocate a plan to destroy our society and subvert our government? We need to consider whether our Constitution enables and protects “religions” that are being used to put our very society and our freedoms in jeopardy.

Islam seeks nothing less than a total global domination.  The word Islam literally means “submission” or “surrender.”  Its scripture must be taken literally, its provisions are intended to dominate every waking moment in the life of a believer.  There is no room for being a half-hearted Muslim and no toleration of watering down its invocations.

The true nature and the threat of Islam is evident in the Quran, a document of exclusion, hatred and violence that shapes Muslims’ thinking and behavior.

The problem is, too few Americans are aware of this, and organizations such as CAIR while other Muslim Brotherhood-linked organizations are taking full advantage of our naïveté. Moreover, Islam stands in stark contrast to the Declaration of Independence, the US Constitution and what the First Amendment was designed to protect: our God-given unalienable rights to life, liberty and the pursuit of happiness. Understand that Sharia is very complex, and it’s derived from multiple Islamic sources.

I say humanity must remain strong and resolute.  People must stop deluding themselves.  Islam will never, ever coexist with the infidels.  We must remove this cancer from this land, move away from an exclusionary, primitive, and tribal mentality to a vision of all humanity being one, with justice and liberty for all.