Contrary to numerous false press accounts leading up to today’s hearing, Mr. Comey has now finally confirmed publicly what he repeatedly told the President privately:  The President was not under investigation as part of any probe into Russian interference.  He also admitted that there is no evidence that a single vote changed as a result of any Russian interference. Marc  Kasowitz, President Trump’s personal lawyer

How does a man with absolutely no law enforcement experience become the head of the most modern crime fighting organization in the United States? 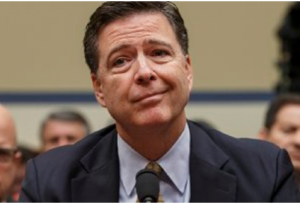 James Comey has proven himself to be a poisonous swamp snake who was paid to deliberately provide cover for high-level corruption by the Clintons and Obama.  And now he has been offered a $10 million-dollar book deal following his testimony before the Senate Intelligence Committee, with a movie to follow making this louse out as a hero.

We know that Comey has been central in trying to destroy the Trump campaign and then the Trump administration. He is as dirty as they come in DC.  His level of cover, the FBI, was deep into an effort to dump Trump.  And what Trump and Sessions’ DOJ did was spectacular.  When Comey was 3,000 miles away, they fired him and dumped his entire office.  Trump moved quickly, and exactly at the right time to cut off the head off the snake of this traitorous Obama/Clinton insider.  Superb inside job by Trump and Sessions!

James Comey was also director and board member of HSBC Bank until 2013, which is tightly connected to the Clinton Foundation. The Clinton Foundation received up to $81 million from clients of the controversial bank. This is the same HSBC that was accused of laundering drug cartel money, was heavily involved in the LIBOR scandal (huge price fixing scandal), and who knows what else, and all while our esteemed FBI Director James Comey says “she didn’t intend it.”  Yeah, right! 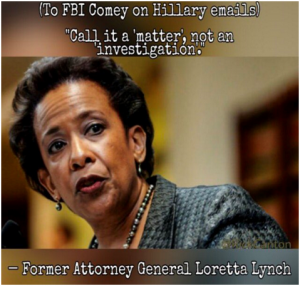 Limbaugh asked where the Republicans were on Comey’s admissions about Loretta Lynch?  Not a word from them…other than Louis Gohmert.

Remember the Whitewater Investigation?  Twenty years ago, Comey, an attorney on the Senate Whitewater Investigation, was looking into the conduct of President Bill Clinton and the first lady, Hillary.  The investigation was to determine whether Bill used his political position as Governor of Arkansas in the 80s to push through an illegal loan to benefit their business partner in Whitewater.  Several people involved went to jail, but no criminal prosecution came down for the Clintons.  James Comey was the Deputy Special Counsel for the investigation.

Remember all those last-minute Bill Clinton pardons right before he left the White House? The list was supposed to be given to Congress for approval well ahead of Bill’s last day.  Among the many questionable pardons was billionaire Marc Rich (who traded illegally with America’s enemies, including Iran).  The whole deal reeked of impropriety after learning that Rich’s wife donated $450,000 to the Clinton Library.   Again, James Comey oversaw investigations of the pardons, and he did not recommend charging Clinton in any of these matters.  Barbara Olson exposed this in her book, The Final Days.  She was my friend, and died on 9/11 in the plane that hit the Pentagon.

Remember the interesting chance meeting of Loretta Lynch and Bill Clinton at the Phoenix airport where they allegedly spoke about their grandchildren?  Shortly after the meeting, FBI Director Comey released his decision not to press charges on Hillary.  He couldn’t wait to exonerate Hillary Clinton, and he said, “I can’t find any intent on her part to share classified data, and therefore no prosecutor would do so.” 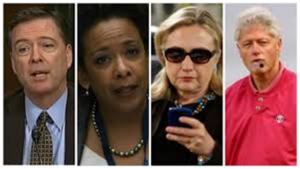 AND, in an unprecedented move, he imposed a gag order on all the agents involved with the Hillary email investigation.  Suspicious?  You bet!

So, we have Lynch, previously appointed by Bill Clinton, and formerly an employee of the law firm that is connected to Hillary’s email scandal, in charge of the investigation into Hillary’s email scandal.  The lead investigative agency is led by a man who twice investigated the Clintons and both times found them not guilty of wrong doing.  He was also appointed by the current President, Obama, who appointed Lynch, who is Comey’s boss.  Comey and Lynch have known each other for decades as well.  Coincidence?  I don’t think so.

Many of the Democrat Senators knew our President was not being investigated, yet they continued to make those false media charges.  And guess who the worst ones were…Chuck Schumer and Elizabeth ‘Pocahontas’ Warren.

Dan McLaughlin, National Review: Just think how many times Schumer made the charge while knowing all along it wasn’t true. All these Democrats charging Trump, alluding to it, alleging. Some of them saying they haven’t seen any evidence of collusion. They were honest about that. But they did not divulge that they knew Trump was not under investigation. This is a huge media scam. Contrast this with Hillary.

Now the Dems are claiming they never said that Trump was under investigation by the FBI.  However, it is blatantly false, their claims appeared in numerous leftist rags.

He leaked data, property of the FBI, to the New York Times via his professor buddy.  He’s a leaker, and for that he should be charged.  His on-camera admission was stunning.

Here is the Director of the FBI, the nation’s top cop, and what does he do?  He acts like a whiny school boy and plays very dastardly games behind the scenes.  So, when he testifies, he tries to explain it away by saying that he was afraid of President Trump.  The guy is 6’8” tall, and he’s afraid of Trump…really?

Comey said he only started writing memos after he met Trump, because he said he thought Trump was a liar and a mean person.  He’s lying again.  He also wrote memos when he spoke to George W. Bush, and admitted it in the book, Angler, which he helped Barton Gellman write about Dick Cheney.  Perhaps he decided he’d collect info on presidents to keep in files just like those of J. Edgar Hoover.

He claimed Trump was lying about him and lying about the FBI, and that he was afraid of Trump.  So, what did he do? He called a buddy of his at the Columbia School of Journalism, Columbia University, and asked him to “share” the memos, his inside private information from talks with our President. This is not “sharing” anything; this is leaking!  And he hoped his buddy would leak it to the media.

Mark Bauerlein, writes, “During his testimony, James Comey didn’t sound like the head of a fearsome investigative agency. He sounded like a middle manager in business who’s just attended a human resources seminar on inappropriate behavior in the workplace.”

There never was any evidence that votes were tampered with by Russia, and Comey admitted it over and over again.  So, if Trump was never part of any investigation, what is all this fake news about Russian involvement in the presidential election.  It’s horse hockey promoted by the commie 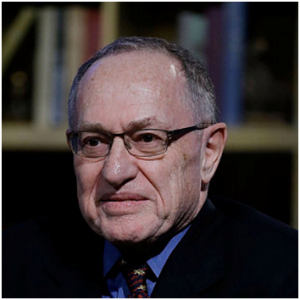 Democrats and media, and we all know it.  What a waste of taxpayer dollars on this fake news garbage investigation.

Democrat Alan Dershowitz, a strict interpreter of the law, has been stellar in exposing the truth.  This is the crowning glory of truth to the lying leftist media from a fellow Democrat who knows the Constitution.  He has made mincemeat of the leftist commentators who haven’t a clue of what our Constitution says.  Watch his interview with Anderson Cooper.

Dershowitz’s article, Comey Confirms That I’m right — and All the Democratic Commentators Are Wrong, explains everything constitutionally.  Here’s part of what he said:

The left seems to believe the FBI Director has powers independent of the President which is totally untrue.  (Dershowitz has pointed out over and over again that the left does not understand our Constitution.)

Look, when Obama was president, he ordered the FBI to do exactly what he wanted done, and no one spoke against it.  That’s the president’s privilege.

As a matter of law, Comey is 100 percent correct.  As I have long argued, and as Comey confirmed in his written statement, our history shows that many presidents—from Adams to Jefferson, to Lincoln, to Roosevelt, to Kennedy, to Bush 1, and to Obama – have directed the Justice Department with regard to ongoing investigations. The history is clear, the precedents are clear, the constitutional structure is clear, and common sense is clear.

Yet virtually every Democratic pundit, in their haste to “get” President Trump, has willfully ignored these realities.  In doing so they have endangered our civil liberties and constitutional rights.

Now that even former Director Comey has acknowledged that the Constitution would permit the president to direct the Justice Department and the FBI in this matter, let us put the issue of obstruction of justice behind us once and for all and focus on the political, moral, and other non-criminal aspects of President Trump’s conduct.

President Trump’s personal lawyer Marc Kasowitz will file a complaint with the Justice Department’s Office of the Inspector General asking for an inquiry into James Comey over his leaking the details of his conversations with the president and the memos about those conversations, according to a source close to the Trump legal team.

Kasowitz is also drafting a similar submission to be sent to the Senate Judiciary Committee regarding the former FBI director’s Senate testimony and “other matters,” according to ABC news.