Home/October 2018, Opinions/James O’Keefe, Doing The Job Our Media Should Be Doing

James O’Keefe, Doing The Job Our Media Should Be Doing

The message was crystal clear: The Beltway—right, left, and center—is an unprincipled swamp. Its denizens spend most of their time raising money to keep the lights on. The creative fires do not burn here. Those who light them are quickly sent home. Others lose heart working long hours for bad pay under indifferent management. Meanwhile, the cynical and soulless all too often find their way to promotions and permanent positions in the oligarchy. —James O’Keefe – Breakthrough: Our Guerilla War to Expose Fraud and Save Democracy

Phyllis Schlafly’s Gateway Eagle Council XLVII featured so many wonderful speakers, but there was one we had met previously at the 2018 January Gathering of Eagles who was back with us…James O’Keefe of Project Veritas.

O’Keefe is an American political conservative activist who is doing the work our main stream media refuses to do…investigative reporting.  He has become the voice of truth in an era where media has abdicated the truth.  And as Pamela Geller so poignantly stated at this year’s council, “Truth has become the new hate speech.” 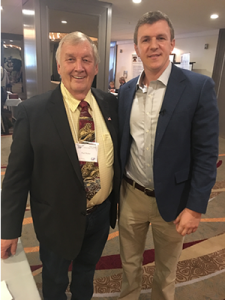 This amazing young man blasted on the scene in 2009 with undercover video recordings of workers at Association of Community Organizations for Reform Now  (ACORN).  These videos portrayed ACORN workers seemingly aiding a couple in criminal planning and when they hit the 24-hour cable news cycle, the U.S. Congress quickly voted to freeze funds for the non-profit.

In June of 2010, this brilliant young warrior for truth formed his 501(c)3 organization, Project Veritas.

NewsWithViews CEO and publisher, Paul Walter was a guest speaker at the September council meeting in St. Louis, Missouri and had an opportunity to chat with James O’Keefe.

O’Keefe produces secretly recorded undercover audio and video encounters with figures and employees in academic, governmental and social service organizations.  What he has shown so many times is abusive and/or illegal behavior by employees and/or representatives of those organizations.

And he’s done it again!

What a fabulous new expose from O’Keefe, and it was announced at Phyllis Schlafly’s Gateway Eagle Council.  Here is the video of his speech to us and what he wanted us to watch for…which has now been exposed.

Watch the undercover video recording of this State Department employee and how he uses his time at work to “resist” while being paid by the federal government…with our tax dollars.

Karaffa bragged about it, he said, “I’m careful about it. I don’t leave a paper trail,” he told undercover reporters from Project Veritas.  I have nothing to lose. It’s impossible to fire federal employees.”  This man openly said that he wants to “f*** sh** up.”

To understand America’s crises today, one must first understand what has happened to two institutions: the university and the news media. They do not regard their mission as educating and informing but indoctrinating, and that indoctrination is socialism.  James O’Keefe and Project Veritas do some of the finest undercover investigative reporting today.  Much of what he has exposed has led directly to the passage of new legislation, federal and state investigations, congressional inquiries, the de-funding of taxpayer-funded groups, arrests, resignations, firings, re-trainings and disciplinary action.