by Rev. Austin Miles
WASHINGTON, D.C.   Just when one thinks things cannot get worse, they do! While Joe Biden was Vice President to faux president Barack Obama, the White House had an open door policy for all LGBT participants. They once lighted the outside of The White House to display, in colored lights, the flag of these misfits.  However, that is not the worst.  The constant flow of sexually confused people came in and out of the White House by invitation.
A Sodomite “marriage” was performed in that vicinity when Biden presided over the “union” of Joe Mahshie and Brian Mosteller, both who worked as White House aides. Indeed, one would see very obvious displays of homosexual behavior simply by walking through the halls of what should be considered as sacred space in the Nation’s Capitol, especially in the West Wing where his office was located. They were all over the place. 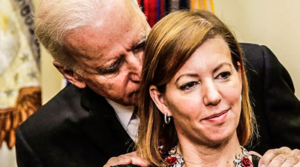 Indeed, the West Wing became the new official LGBT hangout like the Men’s Room in New York’s Lincoln Center.
In order to do this so called “wedding”, Biden obtained special certification from the District of Columbia so he could publicly demonstrate his support for LGBT habits and conduct.
This “wedding ceremony,” took place at the Naval Observatory, the vice president’s official residence (yes his home) with family members present. The Catholic News Services exploded since Biden pretends to be a Catholic, and journalists were asking why the bishops would not discipline him, or better yet, excommunicate him.  Biden also supported and still supports the “right” to an abortion, basically thumbing his nose at the teachings of the church.  Yet he boasts his Catholic faith still to this day.
One journalist wrote: “If you are advocating abortion or presiding at a same-sex “wedding,” then your behavior places you outside the bounds of the Christina faith and should be treated accordingly–for you own good, for the reputation of the church, and the reputation of Christ in Word and deed.  Catholics, like ‘Biden, demean the teachings of the church.
It is puzzling that the church has remained silent with no action against one who mocks the Catholic Church and God. This fuels the emotions of those who see no results of one becoming a Christian, so why bother? Why go to church?
And Joe Biden is the misfit who demands to become The President of The United States. There is no way that a fairly conscious voter would put him in the Oval Office.  Amongst the peculiarities of Biden is the love of sniffing the hair of women, including those he had just met.  We’ve seen a video showing him meet a woman, make his way behind her where he lifts up her hair and…sniffs it. This is psychotic. Possibly a fetish.
And he has handlers who insist that he become our president?  Well, a misfit can easily be manipulated to do whatever they decide he should do.  Many of those handlers know that by getting him into the Oval Office will give them control of the entire country.  And THIS is why there is so much ELECTION FRAUD taking place to make sure their puppet gets in to give them the power to rule.
The Communist media denies that there has been any ‘election fraud.’  I beg your pardon?  Take a look at the stats gathered and listed below:

But don’t take my word for it. Here, in his own words, is Hunter Biden’s father boasting of having participated in developing “the most extensive voter fraud organization in history.”

Any questions?  We must all demand a total recount.  You must all be participants to save the Trump Votes and protect our country.  We cannot let them get away with this. Pastors, remember this during Sunday Sermons.

President Trump-Don’t you dare concede. You were ELECTED.