I am a Republican, a black, dyed in the wool Republican, and I never intend to belong to any other party than the party of freedom and progress. —Frederick Douglass, Orator

White liberals are the most racist people there are, because they put blacks in a box and insist that they think one way – and if they don’t, they attack them as illegitimate, all the while denying that their policies destroy blacks.  —Dr. Ben Carson

You don’t have to agree with Trump but the mob can’t make me not love him. We are both dragon energy. He is my brother. I love everyone. I don’t agree with everything anyone does. That’s what makes us individuals. And we have the right to independent thought.  —Kanye West 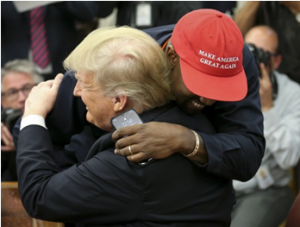 His Oval Office visit was like “dueling banjos…” Dah Dah Dah DahDah…he was so thrilled to be with President Donald J. Trump that his joie de vivre was obvious to everyone, including Mr. Trump.

West talked about growing economic opportunities, rebuilding cities as well as race and culture issues. His obvious love for our President is overwhelming.  This very wealthy black man, who is married to a white woman has become one of Donald J. Trump’s major supporters and the black community is taking notice.

NFL Hall of Fame running back Jim Brown was seated in the Oval Office along with rapper Kayne West to discuss potential presidential pardons, the violent crime surge in West’s hometown of Chicago, and other topics.

Brown does not believe players should kneel during the presentation of the national anthem, and he made that clear when he spoke outside after the meeting.

“Well, I can be very blunt about taking the knee. First of all, I’m an American. That flag is my flag,” Brown told reporters at the White House. “The things that I’ve overcome in this country have made me a better person. I don’t think that we should take knees in protest. … I think we should work out our problems.”

The 82-year-old former NFL star was known for being a champion of civil rights throughout his playing career. Brown founded the Black Economic Foundation in the 1960s to help black Americans start and grow businesses. He has also started programs to mentor inner city youth.

Attacks from the Socialist Left

Rep. Maxine Waters (D-CA) on Monday weighed in on Kanye West’s recent comments about President Trump, praising the rapper for his contributions to the African-American community while also saying he sometimes “talks out of turn.”  Excuse me Maxine, but if anyone talks out of turn it is you.  Ms. Waters you are the one calling for rude and uncivil behavior toward Republicans and conservatives.  Kanye West is expressing his appreciation to President Trump for Making America Great Again for every American, and that includes black Americans whose unemployment rate is now at a 17-year low.

Rep. Jackie Speier (D-CA went so far as to question West’s sanity for meeting with the president.  CNN host Don Lemon ranted against West on Thursday, saying he put on a “minstrel show” for the president, in essence questioning the legitimacy of West’s blackness. Oh yes Don, if black Americans aren’t hardcore leftist Democrats, you have to question their skin color.  Your feeble and derogatory comments calling black conservatives Oreo cookies, or Uncle Toms proves the party of Jim Crow seeks to stymie the freedom of a black man to express his own political opinion. 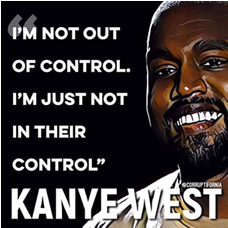 Oh yes, the left has lost a famous black man from their communist plantation.  This American rapper, singer, songwriter, record producer, entrepreneur and fashion designer has escaped being a slave to the socialist left, and they don’t like it one bit.

West’s popularity with black Americans has made Democrats and their socialist chums in the media afraid that others of his caliber may come out and support our President.  Mr. Trump has a great message for young black Americans and Kanye West sees it and wants to help him.

Donald Trump wants to lift all Americans up, and especially young black Americans.  With the help of Kanye West, he can reach so many more of them. 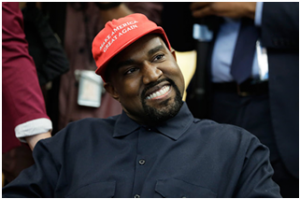 Oh yes, the left is definitely afraid…they know what Trump could start, and what Trump could change.  This is the reason these socialists will insult, marginalize, and ridicule West with everything they have…like cornered snakes, they strike out.

Trump derangement syndrome is in overdrive because the black community responded to Trump when he asked them during his campaign, “What the hell do you have to lose?”  According to Rasmussen’s Daily Presidential Tracking Poll, Trump’s approval rating among black voters stands at 36 percent.  That scares the daylights out of the socialists.  Rising job opportunities, declining unemployment, reduced crime and the huge increase in black owned small businesses has proven Trump is keeping his promises. In fact, according to a study by Guidant Financial, “year-over-year, we saw a 400% increase in the number of African American owned small businesses.”

By reaching out to the black community and pursuing policies that benefit all Americans, Trump was able to convince one of the country’s greatest hip-hop entertainers to provide necessary cover from the disgraceful partisanship of the “mainstream” media.

Trump was right…the black community had nothing to lose and everything to gain.