Keep the Bigger Picture in Mind

The 2016 epic science fiction film Rogue One: A Star Wars Story depicts a motley band of individuals coming together on a mission to steal the schematics to the Death Star, the Galactic Empire’s weapon of mass destruction on a planetary scale. Ordinary people did extraordinary things because they came to the understanding that life and freedom for everyone was worth defending. They looked beyond their individual situations in life and saw the bigger picture, and in doing so, became part of something greater than themselves. The Rogue One team members willingly went through many setbacks and dangers, and sacrificed their lives to accomplish the mission. Though they did not live to see it, the information was later used to destroy the planet killer and save countless lives on a multitude of worlds.

When Jesus began His earthly ministry, He chose twelve disciples. Among them were fishermen, a tax collector, and a political revolutionary. They were a group of emotional, impulsive, sometimes fiery tempered, sometimes slow to understand, honestly skeptical, tender-hearted followers. Disciples like these were unlikely to get along with one another, much less work together effectively for a common cause. 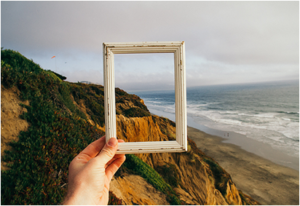 But Jesus took this motley band with all their frailties and patiently taught them, even as they looked for a political kingdom and their elevated places in it. After His death on the cross, bodily resurrection, and ascension to heaven they were filled and empowered by the Holy Spirit to fulfill the mission for which the Lord prepared them. They were able to see beyond their individual aspirations to the bigger picture and became deeply involved in something greater than themselves: calling the world to repentance and faith in the risen Savior, Jesus Christ.

“And Jesus came up and spoke to them, saying, ‘All authority has been given to Me in heaven and on earth. Go therefore and make disciples of all the nations, baptizing them in the name of the Father and the Son and the Holy Spirit, teaching them to observe all that I commanded you; and lo, I am with you always, even to the end of the age.’” (Matthew 28:18-20)

In the midst of the powerful and often hostile Roman empire, the disciples of Jesus were dedicated to fulfilling their commission of proclaiming to the world what they had witnessed regarding Jesus and the salvation available only through His name.

They suffered greatly for their faith and faced many dangers as they spread the gospel message (1 Corinthians 15:1-4), but they turned the world upside down with their bold witness (Acts 17). They were crucified, beheaded, stoned, and put to the sword. But the bigger picture given to them through the risen Christ, the eternal perspective, helped them to remain firm in their mission even though they would not live to see its culmination.

Like Jesus’ followers, we come from many different walks of life and have a multitude of personality traits and imperfections. Many of us were prone to live according to our individual dreams and aspirations that ran counter to God’s plans for us.

But those of us who believed in the Lord Jesus, trusting in Him alone for forgiveness of sin and eternal life, received the presence of the Holy Spirit. He helped us to see beyond the deceptions, devices, and destructive power of the rulers of this world to something far greater than ourselves.

Being reconciled to God through faith in Jesus Christ gives us an understanding of the bigger picture, the eternal perspective, and the mission to share the gospel message as the only enduring hope in a darkening world.

We will face setbacks, disappointments, and dangers just as Jesus’ disciples and believers through the centuries did. After all, we live in a world controlled by very powerful forces that often affect our lives in very negative ways, and sometimes this can be quite overwhelming.

When Jesus invited Peter to walk on the water with Him, Peter was distracted by the stormy wind, took his eyes off Jesus, and started to sink into the water (Matthew 14:22-33). It is easy to become distracted and dismayed by the concerted efforts of global elites to create political and economic instability, energy scarcity, famine, and nuclear war to consolidate their control as gods of this world.

But do not allow these things to discourage you, make you afraid, or cause you to do things that play into the hands of the demonic powers and principalities that control them (Ephesians 6:10-17). Remember that their defeat is sure and everlasting, even if we do not see it in this life (Hebrews 11; Revelation 19:11-21).

Keep your eyes on Jesus and trust in Him. Just as He stretched out His hand and saved Peter from drowning, He is able to keep us from drowning in the evil that attempts to swallow us up in this world.

Immerse yourself in God’s word and study it carefully in its context. There is hope, wisdom, and strength that comes from it. According to the abilities granted to us by God, we must continue to be salt and light in our communities and to proclaim the gospel of Christ wherever and to whomever we can.

What we see now will not and cannot last. The suffering, pain, disappointments, and tragedies we face are all temporary. Keep the bigger picture in mind. The Kingdom of the Lord Jesus Christ is forever. Let us invite as many as we can into that eternal reality, where it will be good and stay good.

“Then I saw a new heaven and a new earth; for the first heaven and the first earth passed away, and there is no longer any sea. And I saw the holy city, new Jerusalem, coming down out of heaven from God, made ready as a bride adorned for her husband. And I heard a loud voice from the throne, saying, ‘Behold, the tabernacle of God is among men, and He will dwell among them, and they shall be His people, and God Himself will be among them, and He will wipe away every tear from their eyes; and there will no longer be any death; there will no longer be any mourning, or crying, or pain; the first things have passed away.’” (Revelation 21:1-4)