Lead like Jesus! Sounds super spiritual and to use today’s hipster pastor language, “way cool!” There are blog posts, multiple articles, even books all dedicated to assisting readers in leading like Jesus lead. The question is, what does that even mean?

In many instances today, authors, speakers, and writers paint a picture of the compassion, mercy, forgiveness, patience, tolerance, and unbounded grace of Jesus. While Jesus is all those things, it doesn’t follow that is His leadership style. The fact is, modern Western Christianity has created a sad caricature of the biblical Jesus.

In Mark 10:32 we read that Jesus and the disciples were on the road once again, this time to head to Jerusalem. This verse says “and Jesus was walking ahead of them, and they were amazed, and those who followed were fearful.” The context of this passage and the place it sits within the overall narrative of Mark’s Gospel is important to understand.

Jesus was now within a few weeks, perhaps as few as 4 to 6, from His divine appointment at Golgotha. Chapter 11:1 tells us Jesus and the disciples approached Jerusalem. Their entry into Jerusalem in verse 11 is what we call Palm Sunday. So the events we are reading about in Mark 10  are relevant to their arrival in Jerusalem and the rapid escalation of hatred that culminated in Calvary.

So, Jesus was walking ahead of the twelve disciples and they were amazed. Do you know why they were amazed? The text doesn’t tell us specifically but I believe the twelve were amazed at the bold determination of Jesus to march right into the jaws of the beast that awaited Him in Jerusalem. The religious system of Judaism in that day was an apostate beast system of corruption, manipulation, and deceit. The Jews had been plotting to murder Jesus for at least the previous 18-24 months. They seethed with rage just thinking of His popularity among the people, and they had become convinced that unless Jesus was killed their entire religious business was going to collapse like an unstable house of cards.

In the events recorded in Mark 10, the Pharisees thought they had conceived of the perfect plan and 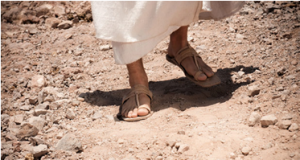 that they had been patient enough to spring their trap when Jesus crossed over the Jordan into Perea (“beyond the Jordan” in 10:1). They deliberately brought up the issue of divorce thinking they could manipulate Jesus into getting Himself arrested based on His own words. The Pharisee’s plan was to engage Jesus in a debate about divorce while He was traveling through the territory ruled by Herod Antipas. It was Herod Antipas who had John the Baptists’ head removed. Do you recall why Herod took such action?  John was jailed and executed because he spoke loud and often that Herod was an adulterer for stealing his brother’s wife. But Jesus once again took them to theological school by teaching them God’s thoughts on the subject.

Now, I’m stating all of this to show you the true nature of Jesus’ leadership style.  Friends, Jesus is not the effeminate Fabio caricature much of the American church thinks He is. Do you want to lead like Jesus? Then here is what you are going to need to do.

(1) You are going to have to lead the way. You are going to have to take the point. I know it has become popular to say that pastoral leadership is all about teaching others to do the ministry. The reality is others will follow and learn as you lead and do. But you better be very careful about how and where you lead God’s people, especially if you are considered a shepherd. God will hold you personally responsible for the spiritual nourishment or lack thereof that His people receive.

(2) You are going to have to find some courage. Leading is not about having all the answers. Only Jesus had all the answers. Leading is about having a determination to meet evil head-on. This includes being courageous in the pulpit. Pastors and ministry leaders simply must stop all the cotton candy sermons about how much God loves people.  The most glaring problem in the church today is not a lack of self-love. People already love themselves too much.

(3) You are going to have to stop listening to false teachers. Today we have well-known teachers, former and current pastors, and heads of denominational organizations who have succumbed to critical race theory propaganda, cultural Marxism, LGBT depravity, the demonic deception that Islam is compatible with American culture and values, and every other Luciferian agenda passed off as “compassionate Christianity.” Listen to me brethren: find some courage and denounce these people and their heresies because here is the truth of the matter:

There is a reason Jesus confronted the beast religious system of His day: He recognized that it was not of God, did not obey His commands, and was instead worshipping idols of their own creation. The LGBT flag-waving, affirming, proud professing Christians are going to wake up in eternity and experience sheer terror when they hear “depart from Me you workers of iniquity.” Listen to me Christian: there is nothing to be proud of when one man sticks his penis into another man’s rectum. Have you lost your mind? That is not love and love has not won anything. Wickedness won and if you can’t see that then you are the problem.

The Islamic interfaith dialogue crowd is a picture of what happens when you deny centuries of history, the plain teachings of the Koran, the current speeches of the God-haters scattered all around the world in mosques, and the barbaric atrocities committed daily for Allah’s honor. What is there to dialogue about with people who say Jesus Christ was not the Son of God, did not die on a cross, never rose from the dead, and certainly is not the Savior of the world? With the fields white to harvest why are impotent stooges being honored for giving Islamic jihadists cover with their blind ego-driven speeches and seminars?

(3) You will need to realize that not all will follow you. The twelve were amazed but the larger contingency of disciples that followed Jesus was fearful (10:32). As I mentioned above, the twelve were amazed at Jesus’ resolve to travel directly to Jerusalem. The twelve knew the heated debates and angry words the religious leaders hurled at Jesus. The twelve had been ridiculed themselves for following Jesus. Watching Jesus walk that road straight into Jerusalem was a lesson they would forget in Gethsemane and in the days following Jesus ascension but, it was also one they remembered and drew strength and courage from after the giving of the Holy Spirit.

Some will fall away because they fear the path you are walking. They fear what they perceive to be the negative consequences for them personally. They will count the cost and decide it is too high a price to pay.

(4) You are going to have to tell people to stop sinning. America is currently in a period of time in which we are witnessing a mass exodus from the church. Do you have any idea why? The reason is simply this: people see very little difference between the lives of professing Christians and the general population. The church does not need another sermon series on being the best parent or spouse you can be. Christians do not need to be told to have their best life now. Christians need to understand that there are answers to their heartbreak. Statistics tell us that pornography is at an all-time high and rising among both men and women who profess faith in Christ. The church doesn’t need another sermon series on good sex. It needs clear biblical teaching on the God-given gift of sex that honors each spouse and that brings to bear the spiritual significance of sexual intercourse within marriage. The church needs to recover its identity as the assembly of the saints but it will not until the saints start acting like the people of God once again. The church needs accountability.

Do you want to lead like Jesus? If so then I encourage you to read Mark 10:38. There you see the cost to yourself and all that you count dear in this life. So, ask yourself, are you able to drink the cup Jesus drank? If you want to lead like Jesus, friend, you better buckle up because the ride is going to get bumpy. You are going to be misunderstood and even hated. You will be seen as a threat to the apostates of the beast religious system which is much of American Christianity, and you will be completely out of step, out of tune, and out of sync with the world system.

Father, I pray that You would raise up men and women who understand the times in which we live and who will not be afraid to lead with fearless conviction and Holy Spirit power, straight into the bared teeth of the Luciferians who control America. Father, equip us with divine courage that we would not flinch at the sight of evil but would instead snarl right back with a ferociousness born of a blood-bought soul. I ask this covering to be upon all who read these words and volunteer to lead like Jesus. In the wonderful, mighty, powerful name of Jesus I ask this, amen!

[BIO: Mike Spaulding was ordained to the ministry in 1998.  Since then he has planted two Calvary Chapel churches – Calvary Christian Fellowship, St. Marys, Ohio, in 1998, and Calvary Chapel of Lima, Ohio, in 2005, where he currently serves as teaching pastor. Mike holds a B.A. in Organizational Management, a Masters Degree in Theological Studies, and a Ph.D. in apologetics.]