Home/November 2020, Opinions/Let’s Take A Break From The Insanity Of This Election: Paradise of New Zealand

Let’s Take A Break From The Insanity Of This Election: Paradise of New Zealand

Are you totally exhausted mentally, spiritually and physically by this national election? It’s made me so sick, I haven’t watched TV for a week to keep my sanity.  We’ve watched both sides call each other liars, cheats and crooks.  We know that Trump cheated on his income taxes.  We know that Joe Biden stands as corrupt as Al Capone over the Ukraine Oil deal with his son Hunter making millions because of his dad’s VP power.  We know Biden didn’t want his children to go to school in an integrated “jungle” in the 1970’s as to bussing his kids into inner cities.  But Trump gets called a ‘racist’.  Everyone knows Joe suffers from onset dementia and that he won’t last six months in office. So, Kamilla Harris will become the next president, or if she doesn’t because Biden keeps staggering upright, his handlers will pull all the strings.  Essentially, we won’t have a president in the White House—we will have a puppet with heaven knows who is pulling the strings.

Therefore, I will return next Monday with a critical analysis of what happened and what’s going to happen to our country.  In the meantime, enjoy a heartwarming story of human kindness from New Zealand.

“That’s the one thing about adventure,” I said.  “We don’t have any idea what’s ahead, what could happen or who we might meet.  I know one thing…it’s for those of us who pedal the highways of the world with great expectations that we enjoy such extravagant opportunities like shearing sheep on a New Zealand ranch in Heavenly Valley. Can’t wait to see what happens tomorrow.  Let’s ride!”

In New Zealand, you “Can’t pedal slowly enough” to absorb its magical scenery.  It’s that beautiful. It’s that romantic! It’s an island of massive mountains, gentle people and tremendous wildlife.  Not to mention around 23 million sheep and only four million people!

After having pedaled the North Island, Doug and I met at a youth hostel in Wellington. At 6’4”, he proved a lanky cyclist on a Diamond Back mountain bike.  After graduating from UCLA in physics, he took a bike trip around the world.  I saw his panniers near a bunk in the hostel. At dinner, I saw him sitting at a table, so I walked over to say greet him.

“You traveling alone?” I asked.  “I’m heading south to Invercargill and Stewart Island for the penguins.  If you like, we could ride together.”

Since I was 13 years older than him, he proved much quieter and easy going.  We found out quickly that we enjoyed each other’s company.  It’s turned out to be a life-time friendship.

After heading down the coast to climb on the 5 million-year-old Moeraki Boulders on Kohekohe Beach, that popped out of the surf south of Pictin. It took Nature about 5.5 million years to create them.  They lay all over the beach. We took pictures of ourselves climbing on them.

Of all my world travels across six continents, I vouch that a bicycle trip through New Zealand proves itself to be one of the most extraordinary with the ocean at your side the whole time.  Whales, seals, sea birds, penguins and so much more entertain you for the entire ride!  At the same time, the Kiwi’s provide such incredible hospitality.

After many days riding, we reached Christchurch for some memorable riding on a “High Wheeler” (Penny Farthing) bicycle.  That same bike, a Columbian, ridden by Thomas Stevens, was the first bicycle to be ridden around the world in 1884 to 1886.  Stevens wrote and illustrated a book on his three years ride:  Bicycling Around the World by Thomas Stevens.  I’ve got a copy and needed a dictionary to read it because of his exquisite use of the English language.

After leaving Christchurch, we headed toward Mt. Cook National Park in the interior where we would see glaciers, snowfields and turquoise lakes.  Along the way, sheep, sheep and more sheep!

After camping out in a paddock surrounded by trees, we got up in the morning to a brilliant sunrise.  Oh, make sure you ride New Zealand from mid-February to May when it’s nicer weather. Otherwise, you will discover what the term “drenched daily” means in the Kiwi dictionary.

We rode through Heavenly Valley.  Glorious mountains, wide valleys, plush green grass and beautiful trees lined the sheep-filled paddocks (pastures).  After heading out, we made five kilometers down the road when we saw a long wooden chute with a line of sheep in a barnyard.

“Hey,” said Doug. “Let’s check out that barn. I think I hear shears humming inside. They might be shearing their sheep.”

We parked the bikes along the fence and walked through the barn door.   Inside, a sweaty, bald guy and his son were bent over some sheep as they sheared them clean to the skin.  An older guy watched the operation.

“How are you doing?” the gray-haired asked.

“Suit yourselves,” the older man said. “You sound like a couple of yanks.”

“Yes sir,” I said. “Doug is from California and I’m from Colorado.”

“I’m Murray and this is James and his son Jack,” he said. “James is the two-time world sheep-shearing champion of Canterbury.”

For the next three hours, we found ourselves in the middle of one of the most fascinating moments of our cycling lives.  Murray invited us to shear the sheep under the tutelage of James.  Talk about back-breaking work!  Doug and I nicked the sheep to draw blood a few times. 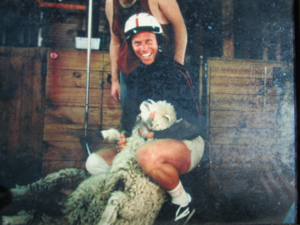 (Frosty Wooldridge at 38 years of age on tour in New Zealand. He’s gently holding the sheep before shearing it. Yes, the sheep bleated a few times, shook himself and walked back out to the pasture, sans his winter coat.)

“It happens when the sheep jump at the sound of the shears,” said James.

After we helped stash the wool, sheared a few more sheep, and moved the sheep into the barnyard, the sun began to set.

After showering up, we dressed for a nice dinner.  As we walked into their elegant dining room with 10 candles burning in the center of the table…a big picture window offered the last rays of the sun setting over the mountains west of us.  We saw paddocks sectioned off on a slopping hill with newly sheared sheep along with other paddocks with sheep ready to be sheared.  They grazed the sheep in different paddocks to keep the grass growing.

After we sat down, Murray cut up a big plate of lamb.  He didn’t know that I was a vegetarian when he blurted out, “I hope you boys aren’t some of those gol-damned vegetarians because we eat mutton here.”

I swallowed…and thinking about being an ambassador for international relations, I said, “We love mutton and all the trimmings.”

“Good,” he said, slamming a big piece of lamb onto my plate.

For sure, I chewed and swallowed with a smile.  Daphne graciously provided us with mashed potatoes, gravy, green beans and salad.  And, as promised, she brought out one blueberry pie and one apple pie as we finished the main course.

She said, “Now you boys don’t have to be bashful.”

We weren’t. We devoured both pies to her delight!

For the next two days, we learned how to move the sheep by using commands to the sheep dogs.  Those incredibly intelligent canines knew how to round up the main body, catch and chase the stragglers back into the main flock, and then, move the sheep through gates that led to the new paddock with ample grass.  It looked much like an hourglass with the sheep waiting to move through the open gate into the new field, and once there, they began grazing to eventually spread out across the field.  It proved to be poetry in motion.

I can’t remember when I felt so close to the Earth, so close to Nature, and so close to understanding life on such an intimate level.  On that farm, Doug and I touched the very essence of existence.  Barn owls, mice, chickens, rabbits, squirrels, jays and a host of other birds with their songs, their feathers and their flight patterns.

After breakfast on the third day, we saddled up the bikes, gave our profound thanks to Murray and Daphne—and headed down the highway toward Mt. Cook.

As we stood astride our bikes, Murray and Daphne said, “Thank you for spending time with us.  God bless and safe travels.”

“Oh, we are indebted to you for this extraordinary moment on this bicycle tour,” said Doug.  “You two are a treasure to humanity.  Thank you so very much!”

Back on the road:

“That was a heck of an experience,” Doug said.  “Can’t imagine it getting any better than this.”

“That’s the one thing about adventure,” I said.  “We don’t have any idea what’s ahead, what could happen or who we might meet.  I know one thing…it’s for those of us who pedal the highways of the world with great expectations that we enjoy such extravagant opportunities like shearing sheep on a New Zealand ranch in Heavenly Valley. Can’t wait to see what happens tomorrow.  Let’s ride!”  Excerpt from: Bicycling Around the World: Tire Tracks for Your Imagination by Frosty Wooldridge