Stop all the clocks, cut off the telephone,
Prevent the dog from barking with a juicy bone.
Silence the pianos and with muffled drum
Bring out the coffin, let the mourners come.
WH Auden – Funeral Blues

Big Ben is the large clock, situated in the Elizabeth Tower at the north end of the Houses of Parliament in the capital of London. It is one of those iconic buildings by which the United Kingdom is often recognised. No matter where you are in London, Big Ben (which is the nickname for the bell inside the clock) can usually be heard.  But on the 21st August, it is about to become silent for 4 years.  It has been chiming for almost 160 years, and like the roots of an old oak tree it offers some people a certain sense of comfort and stability. The sound of its gongs as they are sometimes called, are indicative of London and its history. 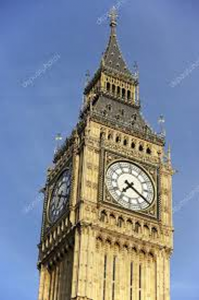 On British TV a picture of Big Ben and the sound of its gongs have signalled in the evening news on a nightly basis across the nation.   It has famously introduced state occasions. It is known for the eleven solemn gongs on Remembrance Day signalling its citizens to remember those who have died in wars; and besides its face on the numerous tourist souvenirs of tea-towels and fridge magnets depicting the London scene, perhaps it is most widely and emotively remembered by the older generation for the famous speech made by Sir Winston Churchill announcing to the world that the war was over on V.E Day in 1945.   The three introductory gongs at the significant time of 3.00 p.m. on the afternoon before his announcement are particularly relevant to the occasion.

Therefore the news that Big Ben will have to go silent for four years, due to Health and Safety issues for the workers who have been set with the task of renovating the clock, have raised immediate objections that London, and indeed the UK, would not be the same without its gongs.     Some have called it ‘PC madness’, especially when sufficient ear defenders could be supplied to the workers.

There is a slight panic across the nation.   For some British people, that sudden loss of all that is familiar may have suddenly hit home.
What will fill their silence?

Homing in on the issue, the Prime Minister, Theresa May, has also raised her concerns on its silence, along with other notable MP’s.   It sounds like they couldn’t have possibly known this was about to happen, and in their very own house as well!   A suggestion has been made that a recording of the gongs set some distance away may be the solution for those who will suffer from the silence of Big Ben, and as a bonus, the health and safety of the workmen will also benefit.

So why is our famous tower and clock being dismantled and renovated, and what is the cost?   In monetary terms it is £29 million.

But Big Ben and the Elizabeth Tower is not the only British institution which is facing some updating.

The National Trust, an organization which looks after the conservation of stately homes, gardens, historical sites and landscapes, all of which are very popular tourist attractions for many people in the UK, has been embroiled in rows this year, this time, all connected to political correctness.

Supported by over 70,000 volunteers and maintained largely by the 4.24 million people’s membership to the The National Trust, who value their heritage and wish it to be protected; National Trust properties are wonderful places to visit and escape the concrete jungle of urbanism.

However, earlier in the year the organization did not think seriously enough when they decided in their collaboration with chocolate manufacturer ‘Cadbury’s’ that now was the time to go along with removing the word ‘Easter’ from their annual Easter egg hunt and how much the public would object.   Not that the children minded, as they are more interested in the chocolate, but the significance of the subtle advertising and the removal of everything which could possibly refer to Christianity was noticeable even to the most secular.  It didn’t go un-missed.

Also this year the National Trust who are now marking the 50th anniversary of the partial decriminalisation of homosexuality, and exploring LGBTQ heritage with a programme called Prejudice and Pride at some of its sites, have been accused of forcing their staff to wear gay pride badges, or else be relegated to back room duties.

Now reversing its decision after the news became public, Dame Helen Gosh, the director of the National Trust is reported as still defending the original decision in a letter to the Daily Telegraph which reads:

“Like many heritage organizations, we have taken the opportunity of the 50th anniversary of the partial decriminalization of homosexuality to tell the story at a dozen or so of our properties of the people who lived there and whose personal lives were outside the social norms of their time,”

You can also read about the activities here from the main website on how they are proudly challenging history.

In honesty, I don’t really think people are interested in the sexuality of the owner or people who lived in National Trust properties.    What people are tired of is being continually indoctrinated and forced into a one world view of sexuality, or else be labelled bigoted.   They go to National Trust properties for a nice day out.  Sometimes it is like a breath of fresh air to visit and know that the most exciting event you will hear about is how the Gardenia’s have grown this year.   Is the National Trust so really out of touch?

In a country where we have been told that Christians need re-educating and that the bible and its message is hateful by the organization, Wilton Park, (an executive agency of the Foreign and Commonwealth office) it is also clear to see that another agenda is really taking place which has a dark and sinister motive.  It has no real concern for people and like the instigation of gay history in national heritage sites is only using the issue as a form of manipulation and subversion techniques into breaking down society and creating further dissension towards its aim of communist goals.

3 O Clock in the Afternoon

Big Ben and all that it is meant to represent to people will possibly one day be seen for the very weak representative that it has become despite its expensive make-over.   Like the half sunken portrayal of the Statue of Liberty which is depicted in many Armageddon films, the UK is sinking fast and the £29 million renovation project cannot fully rejuvenate all that has been really lost by the UK’s insistence of giving up its true heritage and all that is sacred and valuable.

On VE Day when Big Ben struck three and Winston Churchill announced the war was over, he was wrong, even though the event was probably timed to relate to the spiritual event of Christ’s completion on the cross and his defeat over evil.

An ongoing spiritual battle still exists for all of our souls.   The aim is to take us downwards and not upwards.    Many Christians are aware of that battle and how lies can destroy your very being.

Rewriting history and rewriting the bible is a weak attempt at strength.    It is the ultimate action of what extreme pride and extreme prejudice really is.

Interesting Facts we have forgotten:

In 1940 the Silent Minute was introduced. Before the 9pm BBC radio news was broadcast each night, members of the public were encouraged to dedicate silent contemplation and prayer to those on the battlefields, for the 60 seconds that Big Ben would chime.

The 15 minute chimes from Big Ben have lyrics.
All through this hour/Lord be my guide/And by thy power/No foot shall slide.

The Liberty Bell and Big Ben were cast by the same bell foundry – and both have cracks!